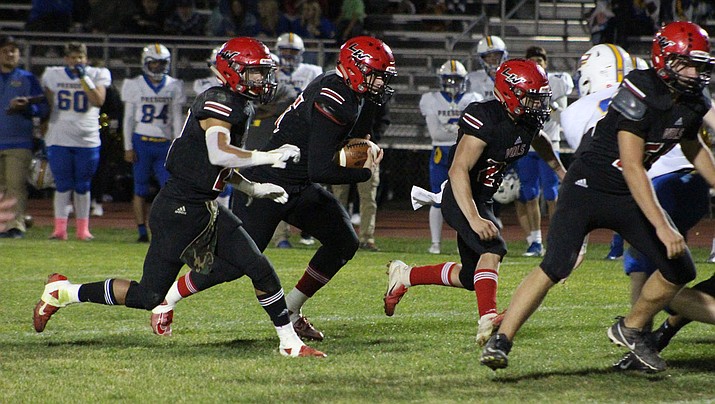 Lee Williams junior Levi Beckham, center, runs the ball as Donnie Simms, left, and Wesley Boyd block for him during a 48-7 loss to Prescott on Friday. (Photo by Beau Bearden/Daily Miner)

KINGMAN – The true test of a leader is how he or she responds to adversity. It would be easy to disappear when times get tough, but that only makes matters worse for everyone.

The No. 28 ranked Lee Williams High School football team dealt with its fair share of misfortune Friday night in a 48-7 loss to No. 15 ranked Prescott, but that didn’t stop a few Vols from providing some uplifting words during the postgame gathering in the end zone.

“We’re all about team building and being a tight-knit family,” said Lee Williams head coach Patrick O’Boyle. “We have guys that care about the program and want to give kudos to the ones that are working hard. It’s just about staying positive with each other. We want that family culture and we want that accountability from the players. We’re starting to see a lot more of that moving forward.”

But even with that said, it was a tough night for the Vols as they couldn’t send 12 seniors out with a victory on Senior Night. Lee Williams did get on the board first as quarterback Devean Santos connected with Kameron Toms on a 15-yard touchdown pass with 3:35 remaining in opening quarter.

But the second quarter was one to forget as Prescott gained the upper hand and never looked back. Lee Williams fumbled in its own territory and the Badgers turned it into six points. That score quickly shifted the momentum in favor of Prescott as it tallied three more touchdowns for a 28-7 halftime lead.

“We let one mistake cost us a little bit,” O’Boyle said of the fumble. “There were a lot of emotions running tonight and that probably played a factor in it, but Prescott is a well-oiled machine. They’re very well-coached, they capitalized on everything that we didn’t correct and they made it right for them.”

The Vols couldn’t find an answer in the second half either as the Badgers (6-3, 4-1 4A Grand Canyon Region) scored twice in the third and one more time in the fourth for the final tally.

“We’re still learning, but we have to learn how to throw punches with punches,” O’Boyle said. “We can’t have them score and just go in the tank. But our kids fought; I’m pleased with their effort. We’re going to get back to the drawing board. Our kids are going to come back, be resilient and fight hard next week.”

“I truly believe that our team will answer back the right way because our seniors are a great group of kids,” O’Boyle said. “We’ve depended on them a lot this year. They’ve built our culture here and we’re starting to get things going in the right direction. We’re very fortunate to have those 12 guys and a lot of them contribute in different ways.”