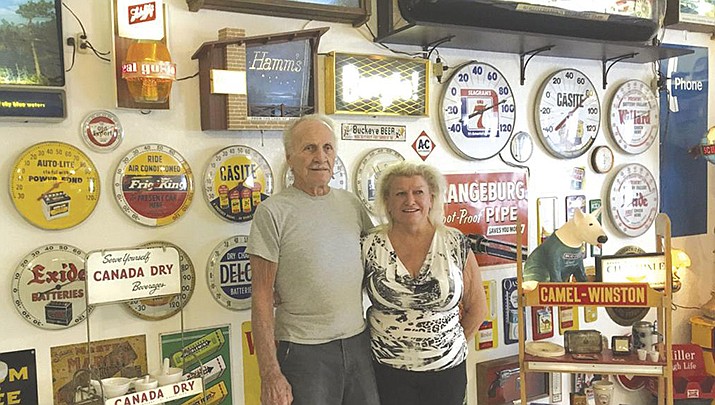 Warren and Susan Sorensen have been acquiring collectibles for 42 years. (Photo by Pam Ashley/Today’s News-Herald)

LAKE HAVASU CITY – For the past 42 years, Warren and Susan Sorensen of Lake Havasu City have been piecing together a collection of antiques and collectibles.

When making a purchase, they have one cardinal rule: The object must be in perfect condition.

It wasn’t always that way.

“I started out collecting Coke trays and tobacco tins. I’d turn around and sell them…it was a quick way to make some money,” Warren said.

All those years of acquiring and refining his collections resulted in weeding out the less desirable pieces and upgrading the overall quality of his collectibles.

By day, the Sorensens were union electricians for Local 640 in Phoenix. But on nights, weekends and vacations, they were on the prowl for antiques and collectibles.

It was a lucrative sideline business that helped them make ends meet.

In the early years, their hobby took them to yard sales, estate auctions, flea markets and antique stores and fairs. Their inventory grew so large that they opened a collectibles store in Phoenix.

The desire to experience all four seasons pushed the couple to a lush region of Arkansas.

In their spacious custom-built home on the White River, the Sorensens filled the 5,000 square-foot home with their collections.

The acquiring-selling-refining routine continued for a few years. Along the way, the couple became highly educated in the collectibles market. Neither one could recall accidentally buying a reproduction or getting swindled on a transaction.

Eight months ago, they decided to return to Arizona.

After much research, the Sorensens chose Havasu for its climate, vistas and small town feel.

It meant paring down and saying farewell to some of their beloved collectibles, but they were ready to retire and enjoy being surrounded by their most-prized acquisitions.

“This house we bought in Havasu wasn’t large enough for our displays, so we converted a four-car garage into our game room,” Warren said.

Their new home also has a two-car garage, so the conversion wasn’t a big sacrifice in terms of having somewhere to harbor their cars.

Years of wheeling and dealing yielded 250 thermometers and clocks, 50 humidors and more than 200 advertising signs.

Pottery collections, Susan’s ladies accessories collection and dozens of vintage framed pictures round out their assortment.

Without saying as much, the Sorensens are immensely proud of their carefully curated collections.

They’ve spent hours creating tasteful display arrangements. While their home is spacious, they’ve also packed a lot in it. Still, they pulled it off gracefully because the home doesn’t feel cluttered or museum-ish.

They’re not done collecting, either.

“We like the thrill of the hunt,” she said, tossing in some advice for novice collectors.

“Collect what you love,” she said. Then Warren chimed in.