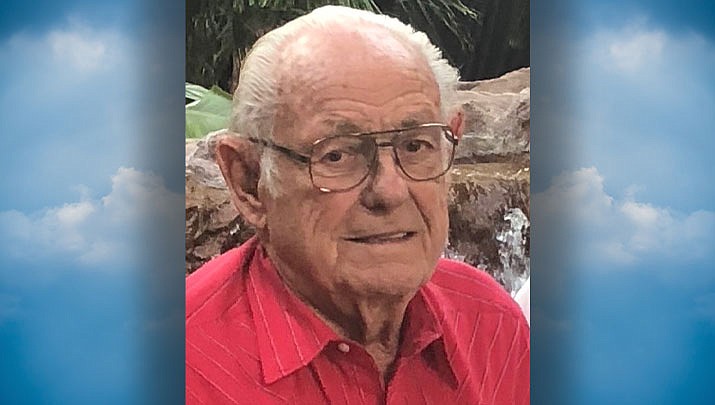 James M. “Jim” Boyett passed away suddenly on Saturday, Oct. 26, 2019 at the age of 87. Born in 1932 in Kingman, he spent the early years of his life on a small farm in Wikieup, Arizona where his family operated a small general store and post office. In 1943 the family moved to Kingman and started an auto repair and salvage business on West Beale Street.

In 1950, he married Virginia Lee Whitwell and they began their new life together in Kingman, where they resided throughout their 66-year marriage. Jim and Virgie raised five children – Jim C. Boyett, Debbie Sedich, Brenda Fass, Dovee Boyett and Jeffrey (Julie) Boyett.

In his early life, Jim worked a variety of jobs including delivering lumber daily to the construction site of Davis Dam. He managed a local auto parts store, drove a fuel delivery truck, and later was employed by Mohave County, in the road department and then in the planning and zoning department. His last years in the workforce were spent as an investigator for the Arizona Registrar of Contractors, retiring in 1999. He also held many offices at the Kingman Seventh-day Adventist Church for 67 years, teaching both adults and children, and being an influential and hands-on contributor, designer and carpenter on the building of both church facilities. He was involved with the initiation of the Big Brother program in Kingman, as well as the Community Schools program prior to the launch of Mohave Community College.

Jim was preceded in death by his parents, J.C. “Pop” Boyett and Goldie Boyett; sister Louise Pepiton, his wife Virgie, and grandson James Fass. He is survived by his five children, 13 grandchildren, his adopted daughter; Dawn; brother William ‘Cado’ Boyett (Donna); sister Bertie Hill, and 23 great-grandchildren as well as many nieces and nephews.

He will be fondly remembered for his kind spirit and special mentoring thoughtfulness as he strived to share his mechanical and construction experience with young members of the community. He had a God-given talent for empowering younger men by teaching them the skills to improve life for their families. His strong faith in God was evidenced each day and never wavered.

A memorial service will be held at the Kingman Seventh-day Adventist Church, 3180 White Cliffs Road, at 3 p.m. Sunday, Nov. 3, followed by a light potluck supper and fellowship.

At his request, he will be cremated and a private family interment will be held at a later date.