Gosar: ‘It is beyond ignorant to claim the Kurds are our allies’ 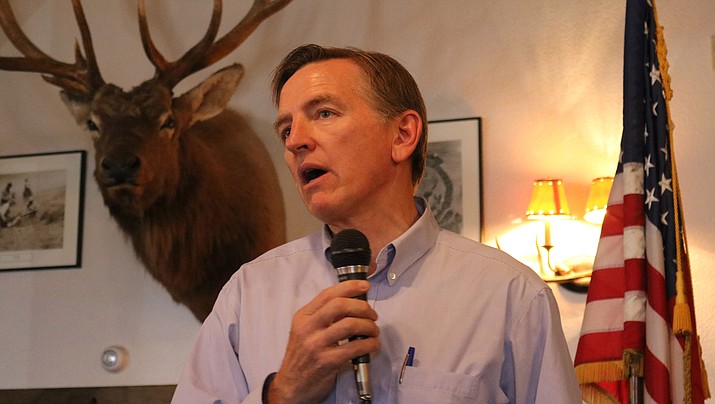 “Make no mistake,” Gosar said in a press release. “This resolution is a pretext to attack Donald Trump.”

The vote came in time of great changes in the U.S.-Turkish relations prompted by an unexpected withdrawal of the U.S. from northern Syria earlier this month. The small contingent of special troops served there as a buffer between the chief U.S. ally in the recent struggle to defeat ISIS, the Kurds, and its mortal enemy – authoritarian Turkey of President Recep Tayyip Erdogan.

“The Kurds are not traditional ‘allies,’” Gosar told The Daily Miner on Thursday, Oct. 31. “This is a complete fabrication. Turkey, in fact, has agreements with the United States, is a NATO member, is our ally and has the relationship we are to defend. The Kurds, run by a communist group called the Kurdistan Workers Party are a designated terrorist group by the United States and EU. It is beyond ignorant to claim the Kurds are our allies. We shared a common enemy in ISIS. No more. No less. “

The fact that the bill was introduced by Rep. Adam Schiff (D-Burbank) didn’t help to promote it among the House Republicans, since Schiff is in charge of the ongoing probe to impeach Trump.

“Genocide is not a relic of the past, but an ever present threat,” Schiff said. “Its denial is not only a continuing injury to the survivors, but makes its repetition against another people more likely.”

Turkey has long disputed the term “genocide” to describe what happened, calling the death toll inflated and considering those killed victims of war. Democrats do not hide they are in fact punishing Turkey for its past and present persecutions of the Kurds, of which at least part Gosar consider “fabricated.” Asked about the current Turkish administration, the congressman responded:

“The President of Turkey has, unfortunately, taken Turkey backwards since 2015, and is tilting towards an authoritarian and sectarian state. Turkey will endure this however and the strain of freedom and secular democracy in Turkey is strong. That being said, Turkey, no matter what state its current domestic affairs are in, is a key ally.”

Two Democrats voted ‘present,’ one of them being Rep. Ilhan Omar (D-Minn.) criticized by the political right for her open condemnation of Israel’s policy on Palestine.

“Accountability and recognition of genocide should not be used as cudgel in a political fight,” Omar wrote in a statement submitted to CNN on Tuesday.

Column | A U.S.-Turkish clash in Syria?
Column | Is interventionists’ era over for good?
Arizona lawmakers join critics of Trump’s troop withdrawal from Syria
Column | Is Trump finally ending our ‘endless wars’?
Column | Too many wars. Too many enemies.