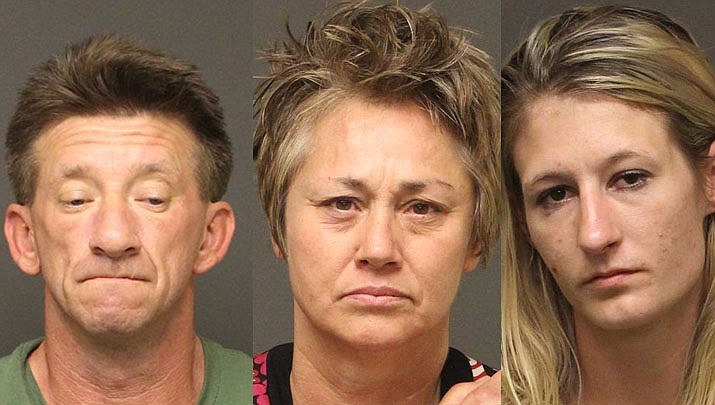 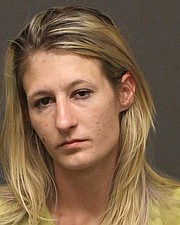 At approximately 8:15 a.m. Tuesday, Aug. 20, deputies responded to a business in the 4700 block of Oatman Highway in reference to a burglary. The employee advised that the building was primarily used for storage for the business and when they arrived that morning they observed the lock had been broken off.

The employee observed a significant amount of tools and furniture were missing and advised that all of the tools had the name of the business engraved on them.

The missing items totaled approximately $14,300 in value and deputies called local pawn shops to advise of the theft. Tire and shoe prints were observed at the scene and were collected for evidence.

At approximately 11 a.m. Tuesday, Aug. 27, deputies responded to a business in the 200 block of Beale Street and were advised that a female subject and two males had entered the store attempting to pawn some of the stolen tools.

Deputies arrived and found the subjects had left the pawn shop and left the stolen items behind. The store had obtained video surveillance of the attempted transaction and deputies were able to identify the female subject from prior contacts as Blackburn.

Deputies located the male subjects at a convenience store close to the business and the male driver advised Blackburn had contacted him for a ride. The male advised he did not know that the items were stolen and gave consent to search his vehicle.

Inside the vehicle, deputies located a purse allegedly belonging to Blackburn that contained syringes and a black tar-like substance, which tested positive for heroin. Deputies canvased the area but were unable to locate Blackburn.

At approximately 8:56 a.m. Thursday, Aug. 29, deputies received an anonymous call advising that there were stolen items being sold at a residence in Golden Valley.

Deputies arrived at the house in the 3400 block of Mayer Road and made contact with Blackburn, who was detained. Deputies located a sneaker-type shoe belonging to Blackburn that matched the shoe prints left at the scene of the burglary.

When asked about the burglary, Blackburn claimed to not know anything about it. Jessica Ann Blackburn was arrested and transported to the Mohave County Adult Detention Facility.

Deputies conducted a traffic stop, but the vehicle did not immediately stop. Approximately 300 yards later, the vehicle came to a stop and deputies approached the driver’s side.

A backpack in the backseat was searched and revealed a scale, and a glass pipe. Another glass pipe was located in the compartment behind the passenger seat. A pat search of all occupants was conducted and a baggie of methamphetamine was located on Jackson. 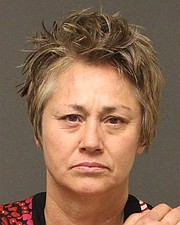 At approximately 3:35 p.m. Tuesday, Aug. 27, deputies responded to an address in the 2000 block of Packard Avenue in reference to an assault. The reporting party advised that a female subject that was his caretaker, identified as Adams, had allegedly been drinking and had assaulted him.

Deputies arrived on scene and observed the female run into a bedroom and close the door. Deputies entered the room and advised Adams she was being detained. Adams refused to be placed in restraints, claiming the victim had broken her wrist.

While being escorted from the house, Adams threw herself on the ground and allegedly began kicking at the deputy’s legs. Backup deputies arrived on scene and assisted in escorting Adams from the residence, who allegedly continued to resist.

Medical responded to evaluate Adam’s claims, however Adams refused to be seen by medical staff. Deputies observed damages inside the residence and the victim estimated the damages to be approximately $680.

Adams was arrested and transported to the Mohave County Adult Detention Facility.