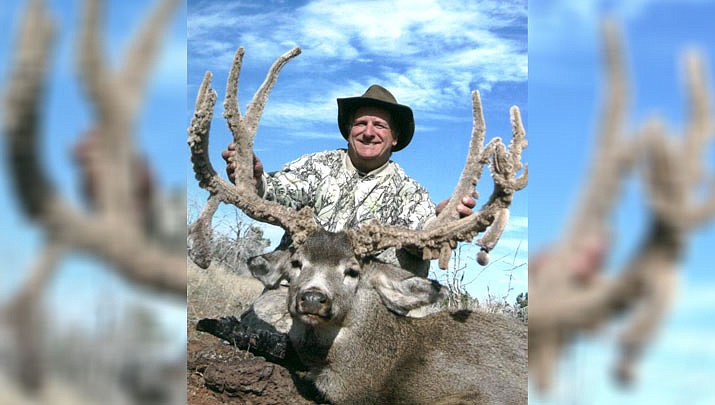 Former Kingman resident Tony Keller took this massive buck on the Arizona Strip several years ago. The first phase of the archery deer hunting season in Arizona continues through Sept. 12. (Photo by Don Martin/For the Miner)

KINGMAN – The fall archery deer season is in full swing and will be open for another 10 days, closing on Sept. 12.

For many local sportsmen, this hunt is the first time since January that they have been in the great outdoors with stick and string.

I had the opportunity to go out with a couple of friends who live in Lake Havasu City – Mike Hulsey and Bobby Condit – on the opener of their hunts.

Archers in most areas across the state don’t have to draw these tags. They can be purchased over the counter. Only areas like the Kaibab (Unit 12A) and the Arizona Strip (Units 13A and 13B) do archers have to participate in a drawing to get a tag.

Both Hulsey and Condit were unsuccessful in the draw for elk or rifle deer tags, so they decided to take advantage of the opportunity to go out and pursue mule deer.

Archery hunting for mule deer in Mohave County is very popular, with a lot of locals in the field for the three week season. Those that don’t fill a tag in either the January or the August/September hunts can also use the tag in December, when yet another season opens.

Hulsey just went all out and got one of the new Ravin 29 crossbows. He recently had shoulder surgery and as a result was eligible to obtain a crossbow permit from the Arizona Game and Fish Department.

Crossbow technology has come a long ways since the old days. The manufacturer claims this bow shoots bolts – not arrows – at over 400 feet per second, and comes equipped with a telescopic sight. The company says this bow is capable of three-inch groups at 100 yards! Heck I know a few rifle hunters that can’t do that!

Condit on the other hand uses a compound bow. He has only been archery hunting for a few years and in January, he took his first big game animal with his bow, a very large boar javelina.

He had pursued deer last year too, but never got a shot.

His goal was to take a buck with his bow and arrow, and put some meat in the freezer.

Hulsey, who has taken some big deer in the past, was going to be very selective on this hunt. Condit wasn’t going to be quite as picky. If it had antlers, he would try and take it.

Opening morning Hulsey and Condit tried an area in the Hualapai Mountains where in the past I had seen deer. I wasn’t able to go out with them that morning, and with the extreme heat, the hunt was a bust.

I went out with them for the afternoon hunt, but all we saw was one lonesome doe, who came into a waterhole in the low desert country that we were watching from about 1,000 yards away!

The next day we decided to try down in the desert area near Wikieup. Mike and Bobby had hunted for javelina in this area before, and had seen a few deer there.

Turned out to be a good move.

We arrived at the area we wanted to glass just as it got light. It was going to be another hot day and we all felt the deer would be within a mile of water and would be bedding down early.

With those parameters in mind we started looking.

Condit found the first deer of the day. There were two bucks and a single doe feeding on some green bushes at the top of a canyon that came up from the desert floor.

One of the bucks was an older buck – a regression buck – who had thick fuzzy antlers, but only two points on each side. The other buck was a much smaller 2x1, again with fuzzy antlers.

For the next hour we watched as the bucks stayed together and fed up a canyon. The doe went off by herself.

It was neat to watch these two bucks who obviously had a place in mind that they wanted to bed for the day. Bobby tried to sneak up on them, but never got into bow range.

Finally they fed over the top of a ridge and were gone. No way that Bobby could catch up with them.

We started moving up to glass another spot when Hulsey glassed up a single doe in the bottom of a canyon. Bucks are usually still in their bachelor groups this time of year and have little if any interest in the does.

We continued up the ridge when Hulsey spotted a mature 3x3 lying in the shadows of a Palo Cristi tree.

That started a cat-and-mouse game that lasted for about 20 minutes.

Bobby got to within 58 yards of the buck and waited for it to stand up. Mike and I moved into a different spot and Mike had the buck at 55 yards, but he really wanted Bobby to take the shot.

Finally the buck stood up and Condit has his shot! But his deadly broadhead-tipped arrow clipped a limb near the buck and flew off into a canyon, never to be seen again. Mike had a shot, but the buck was looking straight at him, and so Mike passed.

As the buck started to trot off, two more mature bucks, both 3x3s, stood up and joined their buddy. Last we saw them they were two ridges away and still moving.

But less than an hour later we would see yet another large mature buck. As we passed a waterhole we saw him slowly walking in. Just over a 100 yards away, this guy was thirsty. His mouth opened and stopped and turned and just walked away.

Bobby would sit at this water for some time, hoping the buck would come back, but a ranch employee drove up, got off his quad and walked all around the water. He never did see Condit.

Hulsey had to leave, but Bobby and I went back out to another area that afternoon. But Lady Luck had left us, and we never saw another deer.

So goes the life of an archery deer hunter.

Sometimes you win, but most of the time you lose. This time the hunters lost, but we all agreed it was a fun time in the great outdoors!

Introducing a friend to hunting is very rewarding
The thrill of the hunt not always rewarded
Nature Column: Archer bags his second-chance buck
Cobb starts out 2019 by taking another archery buck
Young man has successful hunts for elk, deer and javelina