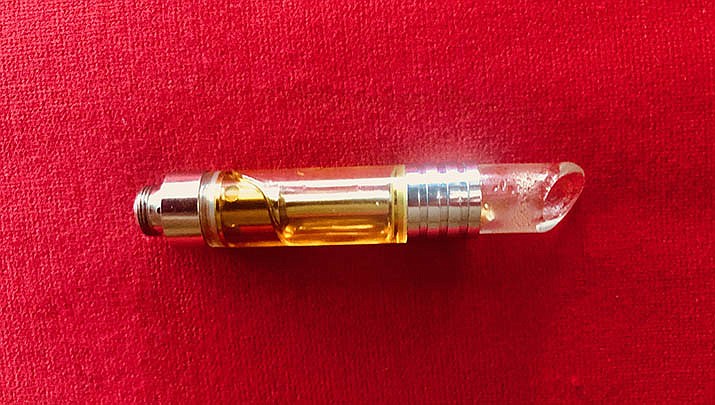 This vape cartridge can hold a gram of cannabis oil extract. (Photo by Agata Popeda/Daily Miner)

In late August, The Washington Post published a story of a 20-year-old man from Utah hospitalized for severe lung injuries related to vaping. About the same time, an Illinois woman in her 30s died after falling ill following vaping, the Illinois Department of Public Health confirmed on Aug. 23.

With the start of the new month, there are 215 similar reported cases under investigation across the nation, some of them questioning cannabis products being sold in Nevada and California, two recreational marijuana states within driving distance from Kingman where vaping cannabis is common.

Vaping entered the scene around 2010, becoming popular with teens and young adults who switched to e-cigarettes. It revolutionized the tobacco market, and now it’s doing the same to the growing recreational marijuana market.

Some doctors suspect the illness is related to a particular toxin or substance that is being added to the newer products, but some local long-time marijuana smokers say they’ve always had bad feelings about vaping.

“Liquid doesn’t belong in human lungs,” said one smoker on the condition of anonymity. “The form might make all the difference.”

“That’s why we try to not use vape pens that much. I mostly do edibles,” added another, referring to cannabis products such as candies and baked goods.

That is also the opinion of Thomas Eissenberg from Virginia Commonwealth University, who sees inhaling oil into the lungs as “extremely dangerous behavior which can lead to death.”

In the case of the Utah patient, doctors found evidence of abnormal immune cells in his lungs, generally associated with a rare type of pneumonia seen in older people who accidentally inhale droplets from oil-based laxatives like mineral oil, The Washington Post reported.

The sickness has similar symptoms to a viral or bacterial pneumonia, but when doctors run tests, they all come out negative. Patients typically experience problems with breathing, they feel dizziness and vomiting.

Vaping works by heating liquid and turning it into steam to be inhaled. If this process is incomplete, there is a chance liquid leftovers will stay in the lungs. It can be something as simple as vitamin E oil or vegetable glycerin made of vegetable oil – something that is not designed to be vaped. Health officials say many vaping ingredients are not listed on the products.

Ty Dowd, the owner of The Old Time Vape in Kingman, disagrees.

“It’s all propaganda,” he told The Daily Miner. “It has nothing to do with vaping or e-cigarettes. All these cases of sickness are related to THC products; cartridges sold on the black market.”

He does not sell those because recreational marijuana is still illegal in Arizona. But that doesn’t stop Kingmanites from driving to Laughlin, Nevada or Needles, California to buy their cannabis.

Dowd’s diagnosis is echoed by the former commissioner of the Food and Drug Administration, Dr. Scott Gottlieb, who suspects it is cannabis products that are to be blamed for the illness, since manufacturers of e-cigarettes did not suddenly change their ingredients.

Alternatively, it might be just a matter of contamination resulting from reusing vials and cartridges.

Health officials don’t have a breakdown of how many of the sick people vaped THC, but in many instances patients were getting the marijuana liquid from friends in states with legal supplies of the drug, like California or Colorado. Also, while the FDA oversees CBD (medical marijuana) products sold as dietary supplements, it does not regulate THC (recreational marijuana), which is illegal under federal law.