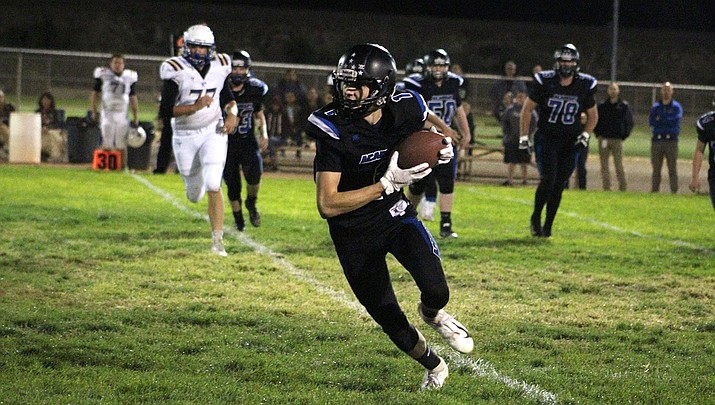 Dallas Edwards and the Tigers play their home opener Friday when Parker comes to town for a 7 p.m. contest at Southside Park. (Daily Miner file photo)

KINGMAN – It is never easy to watch a lead slip away, but it is even tougher when it is against a rival. The Kingman Academy High School football team knows that feeling all too well after losing at Parker a year ago.

But the past is the past and the Tigers have focused on not letting it happen again when they host the Broncs at 7 p.m. Friday at Southside Park.

“It’s been something we’ve talked about during the summer and even in the winter,” Academy head coach John Morgando said of holding onto a lead. “It got brought up in weightlifting – ‘Hey, don’t lead the lead slip away. Don’t let them come back. We have to learn how to finish.’”

The Tigers held a 21-6 halftime advantage last year on the road, but it disappeared in the second half as Parker rallied for the come-from-behind victory in overtime. It gave the Broncs a 5-1 advantage in the all-time series, with Academy’s lone victory coming in 2017.

“I look at it as a big rivalry game for us because we’re very similar as far as talent-levels a lot of years,” Morgando said. “I always feel like we should be able to get them, but they typically beat us. It’s always a close game. I have a lot of respect for Coach (Jeston) Lotts. We talk a bit and it’s a game I look forward to playing and doing well in.”

The Tigers have their work cut out for them though, as Parker is already 2-0 with wins over Chino Valley and Wickenburg. The Broncos opened the season with a 30-23 victory at Chino Valley and followed it up last week at home in a 36-6 beating of Wickenburg.

“Those kids are committed to that program,” Morgando said. “It shows you that all these extra factors don’t matter and a small school can have success against 3A opponents. Parker is a good program. It’s something I show the kids, ‘Hey look, if Parker can do it, you can do it.’”

The first step in accomplishing that goal is putting the season-opening 41-0 loss to St. Johns in the rearview mirror. Academy did move the ball against the Redskins, but Morgando said the drives “tapered out” due to “self-inflicted” miscues.

However, the Tigers were missing a few players two weeks ago and are still battling some injuries.

“We’re going to have to do some shuffling this week,” Morgando said. “It’s just something that we have to deal with, as far as availability of kids, how many we have out there and everything else.”

The Tigers have to carry on though and feel they can find success against Parker in their home opener.

“We should be able to move the ball against Parker and score,” Morgando said. “We got up on them early last year and we let it slip away. We can’t do that this year. We just have to keep on them and we can do it. I think we can move the ball and pass against them.”

However, the pressure isn’t just on the offense finding success.

Academy’s defense will also play a big role as the Broncs like to do one thing – and a lot of it.

“Parker goes on long drives, they grind you out,” Morgando said. “They’re a heavy-run team. If you can’t stand up to that, they’re going to get you in the long run. We just have to put points on the board, get some drives of our own to keep the ball out of their hands and shut them down when we get the opportunity.”