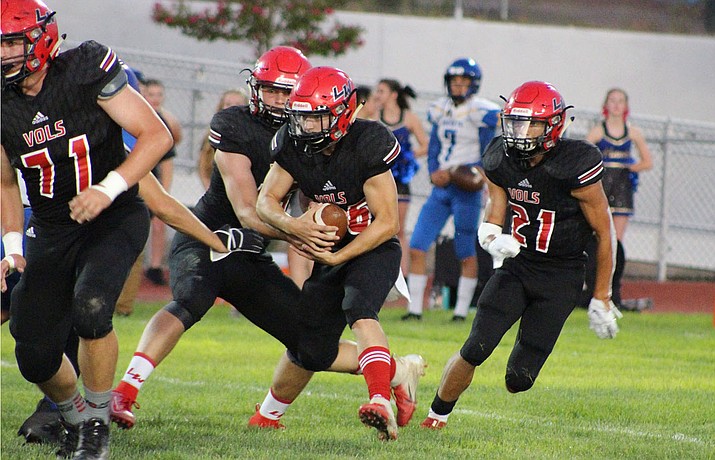 Lee Williams senior Wesley Boyd has rushed for 179 yards and a touchdown this season. Boyd and the Vols hit the road to play River Valley at 3:30 p.m. Friday in Bullhead City. (Daily Miner file photo)

It is not a normal occurrence, but the Lee Williams High School football team will experience it Friday with a 3:30 p.m. kickoff against River Valley at the Anderson Auto Group Fieldhouse in Bullhead City.

“We just have to be audible ready – a game is a game,” said Vols head coach Patrick O’Boyle. “We have to prepare the same way and we’re not going to let an external factor affect the way we’re doing things. We have to show up and do things the right way, and things will take care of themselves.”

Lee Williams knows it can’t focus on the start time after a disappointing loss a week ago. The Vols jumped out to a three touchdown advantage, but then went scoreless the rest of the way in a 22-18 setback at home against Buckeye.

That is in the rearview mirror though as Lee Williams has moved on and is focused on taking steps in the right direction.

“If we can get that lead, now we just have to learn to play with the lead,” O’Boyle said. “And the kids have done a really nice job this week of focusing in and understanding that we have be accountable and do things our way. It can’t just be ‘Do what we want to do, only when we want to do it.’ It has to be our standard all the time. And I think we’re going to see some vast improvements in the next couple of weeks.”

Only time will tell how the Vols fare down the road, but the next test is River Valley. The Dust Devils already have wins over Needles and Mohave and scored more than 30 points in each game.

River Valley sliced up Mohave’s defense for 321 yards, led by quarterback Seth Christy. The senior passed for 153 yards, while Zach Hammett added 101 yards and a touchdown on the ground.

The Vols will answer with Wesley Boyd. The senior has rushed for 179 yards and a touchdown this season.

But Boyd won’t be the lone playmaker.

“Wesley is doing a great job right now and our offensive line is doing a really good job,” O’Boyle said. “We have to give a lot of credit to those guys – they’re doing a great job busting their butts and doing things the right way. And that’s why Wesley is able to be successful right now. But we’re looking for whoever is in the game to be productive and efficient. It doesn’t really matter for us who gets the ball. It just matters the end result of doing our job right and coming out with a win.”