Prep Football: Vols bounce back with win over River Valley 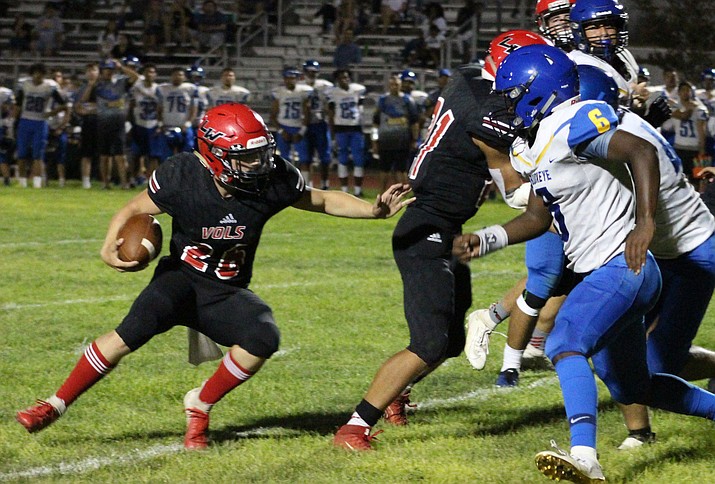 KINGMAN – It may have been close, but the Lee Williams High School football team took care of business Friday night with a 12-0 victory against River Valley at the Anderson Auto Group Fieldhouse in Bullhead City.

“We’re happy to get out of anywhere with a win,” said Vols head coach Patrick O’Boyle. “A win is the ultimate goal and our kids competed well and played well. Hats off to our defense. They played phenomenal again and our offensive line did a great job again, as well. So overall a good game.”

Wesley Boyd accounted for both scores as he caught a pass for six points and then rushed for a touchdown.

“Wesley has definitely been putting in the work,” O’Boyle said. “He’s having success because we’re playing as a group. And he’ll be the first guy to tell you that you can’t do it by yourself. We’ve been lucky enough that he’s been playing pretty well for us. Hopefully that continues and we can get some more guys involved.”

Lee Williams hopes that is the case as the offense hasn’t found the success it wants in the red zone.

The Vols have scored just six touchdowns through three games and only have one more contest until 4A Grand Canyon Region play kicks off at Bradshaw Mountain Sept. 20

“Obviously we would like to come away with a few more points,” O’Boyle said. “When we get down in the red zone, we’re still trying to find ways to punch the football in. But we’re staying positive and we know our offense is moving the football. The point totals aren’t showing much for it right now, but anytime you can score more than the other team, that’s always a good thing. Right now we’re just going to continue staying focused and getting better each day.”