Hot Jobs: MCC Fire Academy gets firefighters in the door
Applications for 2020 Fire Academy are now being accepted 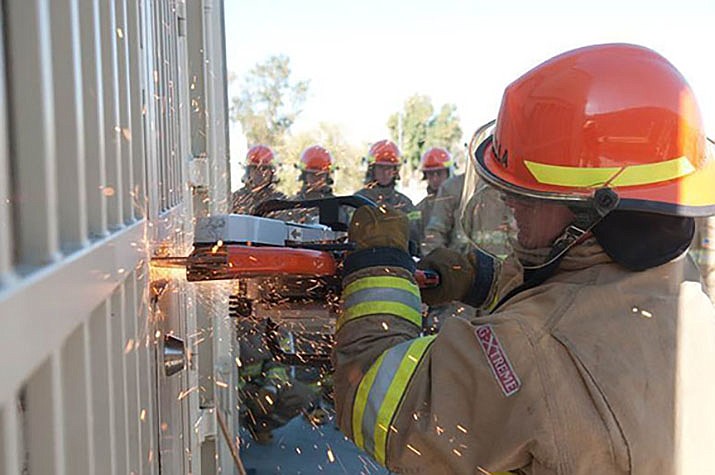 Mohave Community College is now accepting applications for its 2020 Fire Academy. Above, students train to use a rotary saw to gain entry through a metal door during a previous academy. (Photo courtesy of MCC)

Most kids growing up dreaming of being a police officer, teacher, astronaut or firefighter. For those who dreamed of being a firefighter, Mohave Community College can make their dreams come true.

MCC is now accepting applications for its 2020 Fire Academy. The school’s Fire Science program partners with local fire departments to offer education and training. Completing a fire academy is a requirement for anyone who wants to become a firefighter.

Quentin Lopez, a Kingman Fire Department firefighter, always looked up to firemen, especially because his father worked in the fire service and was always at the fire station and participating in events.

“With this I always carried a yearning to be a part of this big family in a more direct way,” Lopez said in an email to the Daily Miner. I love being a part of my community, being a leader in my community, and being able to help those on possibly the worst day of their life.”

Lopez was part of the fire academy one of the previous times it was held in Kingman. His experience during the academy was memorable. He learned many skills that helped him become the firefighter he is today.

“From early morning runs to battling a live fire on the training grounds,” Lopez said. “Going through rigorous physical training in the scorching heat only relying on my partner and self-will to keep pushing through.”

Being a firefighter is more than fighting fires and getting to ride in a big red truck. Firefighters have to be physically and mentally strong.

Lopez said during the academy he learned the mental and emotional attributes of being a firefighter as challenges came his way.

“The biggest challenge I faced during my academy happened when other cadets would drop out,” Lopez said. “Trying to persevere when you're losing those who you rely on the most was difficult, but the group became tighter and we grew stronger.”

Lopez would tell younger generations considering a career in the firefighting industry to take a ride along with a local fire department. He took many ridealongs with KFD and it only made him want it more.

“Always remember to be humble and go on shift like it’s your last day. Do your best, be positive, be nice and always treat a patient the way you'd want your family member treated,” Lopez said. “One day it will be time to get off the truck and hang up your boots so enjoy the job while it’s there.”

Kamrin Dooley, MCC fire science instructor and a firefighter in Lake Havasu City, said the last few years there have been about 30 applicants but the maximum number of applicants accepted is 24.

“In the last few years, a little over 50% (of fire academy graduates) have jobs in the fire service within the first year,” he said.

When people think of firefighters, often they picture a man, but Dooley said over the years more women have been signing up to become firefighters.

From last year’s class, three out of 24 students were women. He said as long as people can pass the physical fitness part of the academy, they will most likely make it.

“Some of those girls even outwork the guys because they got a little more fire to them,” Dooley said. “(They’re) just trying to say ‘hey, I can do this job and I’m here to prove you wrong,’ which I think is awesome.”

Applications are due Oct. 18. The academy is a 272-hour course providing recruits with training in basic firefighting concepts including fire behavior, rescue procedures, command and control, fire suppression, hazardous materials and firefighter safety. The academy will be held in Bullhead City this year.

The fire academy starts in January 2020 and spans 16 weeks. Recruits who successfully complete the academy will receive 12 college credits and the following certificates: AZ State FF 1 and 2, Hazmat Awareness and Operations, Wildland S-130 and 190, and ICS 100, 200, 700 and 800. The academy also establishes the foundation for an Associate of Science degree in fire science.

The course is scheduled from 6–10 p.m. Tuesdays and Thursdays and from 6 a.m. to 5 p.m. Saturdays. The program has a strict attendance policy and students are only allowed 24 hours of excused absences during the program.

Dooley said it’s a noble profession. He recommends it to anyone that wants to help people, and said it puts food on the table.

Applications are available at www.mohave.edu/fire.