IT: Chapter Two – A little too long, even for a Stephen King fan 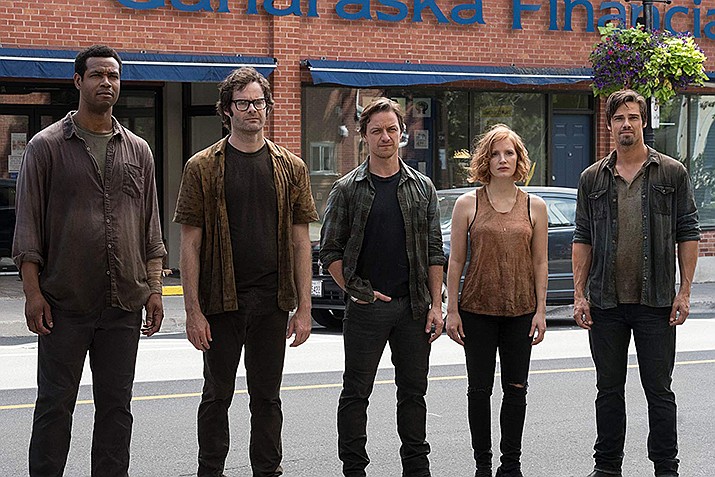 Be prepared. It's a long movie. Not so long where you're falling asleep. Just long in terms of delving into each of the main characters so much it gets a bit tedious. Yes, one of the tools used is to individualize each character's specific terror and it works. It just seems a bit drawn out. Plus, having seen the previous It versions or having read the book definitely helps.

Going back in time to when the characters were young helps explain a few things. For those who saw the first It movie you'll appreciate the nostalgia. But it doesn't supply enough depth to make it worth the time. As a writer, Stephen King likes to fully flesh out his characters which is why he objects to some of his stories turning into movies because of time restraints. Plus, reading the book and imagining the settings, scenes and actions is considerably more creative. Pennywise (Bill Skarsgard) isn't as prevalent as he was in the last It either. But he manages to be even creepier and I think he has more teeth.

The Losers club is the same set of kids who shut down Pennywise 27 years ago. But the club doesn't remain intact at the end. Some lovable characters are killed off. Ben (Jay Ryan) is the only club member to remain in Derry. The others went about their lives. Some time is spent briefly exploring their lives just as Ben calls them. Each has physical reactions to the phone call. Good thing this wasn't in 3D because Riche (Bill Hader) would have had the audience ducking. Richie does it several more times throughout the movie.

The characters seemed to mesh well and the story kept things going. As adults, the Losers Club doesn't seem to remember what happened in Derry. But as a mechanism to further the story, although 27 years older, the group began acting like they were the same group 27 years ago. As such, memories from back then come back in spurts and the actors characterize the guttural reactions very well.

One of the plot tools used seemed entirely unnecessary: Each character had to acquire a “totem” or relic from their past to sacrifice at the end ceremony. A lot of time was spent on each gathering their relics and the final ceremony could have done well without them.

Full disclosure: I am a Stephen King fan. I liked the story, read the book and saw all the movies. This one was just too long. It seemed that after a certain point the momentum was lost and then had to be built up again. Scattered throughout the movie were inventive scenes that may take you by surprise. I know I'll be giving my fortune cookies a second look from now on. Some may think the use of spider-like creatures was overdone. I would agree. There are more inventive ways of getting around that would raise the creep factor considerably. As usual, Stephen King makes an appearance as well. Look at the shopkeeper where Bill (James McAvoy) buys his bike. Load up on supplies and settle in for the long haul. It: Chapter 2 is rated R and runs 169 minutes. I'll give It: Chapter 2 three and a half Miners. Please pass the fortune cookies.

‘Glass’ is an insult to the word flop
‘It’ gets four out of five
‘The Dark Tower’ is a little better than OK
Police ‘terrified’ by red ‘It’ balloons tied to sewer grates
For your entertainment, pick emotions - or zombies
Event Calendar