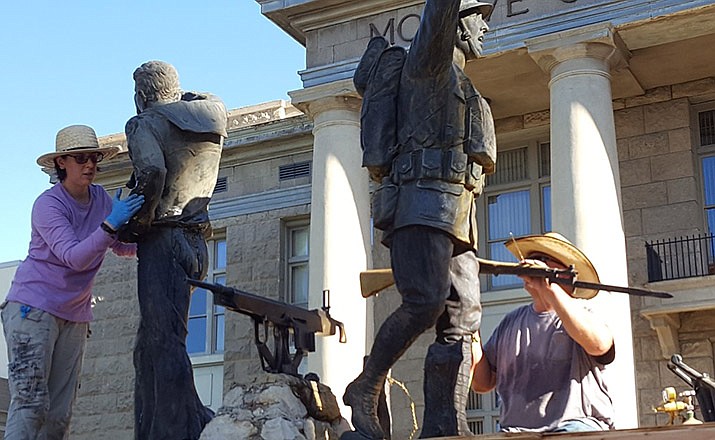 KINGMAN – Doughboy, Sailor and the World War I Monument as a whole at Mohave County Superior Court has a fresh new look that honors the sacrifices made during the Great War.

Wallace said the monument, designed by E.M. Viquesney, remained in great condition from the time it went up in May 1928 all the way through his childhood in the late 1950s and early ‘60s. But things started to take a turn for the worse in the 1990s.

The Colt machine gun “Potato Digger” was stolen from the monument at around that time. Alkali and silica buildups also began to plague the statue and continued to do so for decades. That remained true until the end of June, when the first phase of the restoration project was officially completed.

The Mohave County community raised more than $34,000 for enhanced lighting, landscaping, surveillance and the creation of a bronze replica of the machine gun.

But there was even more work needed, and using about $2,600 left over from the first phase, additional restoration was completed Saturday, Sept. 7.

That work entailed fixing the wrist of the infantryman “Doughboy,” which had almost broken in half. The repairs could not be made in time for the rededication ceremony that was held at the end of June.

Metal chasing specialists Kristine MacDonald and Stan Schmick from Prescott’s Bronze Age Foundry performed the repairs Saturday. They removed and cleaned the accumulated natural debris and alkali from landscaping overspray, and addressed the natural aging of the copper. They then applied a series of nitrates and chemicals to return the monument to its 1928 appearance.

“The monument has now been fully restored to its original condition and the dignity it deserves,” Wallace wrote in a news release. “The result is stunning. The people of Mohave County who all came together to fund this restoration work have demonstrated that they recognize and will not forget those who served in World War I to protect our freedoms.”