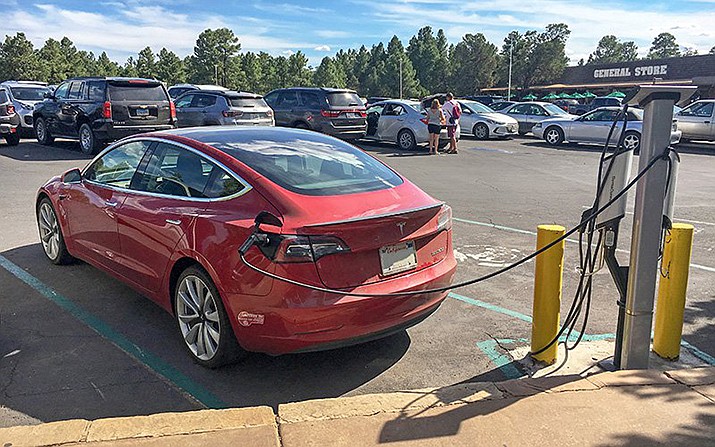 PHOENIX – Electric vehicle owners can now drive to Grand Canyon National Park without worrying about dead batteries, thanks to new charging stations on the South Rim that opened to the public in late August.

Park visitors can now charge their EVs at six stations located around the park, including Yavapai Lodge, Canyon Village Market and Maswik North, the National Park Service said in a recent news release. In addition, NPS said, five charging stations were installed at the Grand Hotel in the gateway community of Tusayan and at the Grand Canyon Railway Hotel in Williams.

The project – a joint effort by BMW of North America, which donated the charging stations, the Department of Energy, the NPS and the National Park Foundation – adds to a growing network of EV chargers in northern Arizona.

“The automobile has long been central to the great American vacation in national parks,” P. Daniel Smith, deputy director of the National Park Service, said in the same release. “While our treasured landscapes offer familiar vistas time after time, the automobile has changed greatly, and parks want to meet the needs of our visitors who use electric and plug-in hybrid electric vehicles. … Electric vehicle drivers will have more places to charge the car while recharging themselves with nature and parks.”

David Perkins, the sustainability director for Xanterra Travel Collection Grand Canyon, which operates restaurants, hotels and lodges in the park, said a number of factors were taken into account when deciding site locations, such as accessibility, number of visitors and the opportunity to get people to the park from travel hubs, including Phoenix.

“So they (BMW of North America) said they couldn’t do the in-park stations without also having en route going on,” Perkins said. “So I think that was a factor, you know, how well they could build the infrastructure, leading to the parks also.”

Perkins said one drawback to owning an electric vehicle is finding places to recharge.

Visitors’ feedback has been positive, he said, adding that he recently spoke with a Xanterra hotel guest who was considering purchasing an electric vehicle and had rented a Tesla to visit the Canyon.

“He was really grateful for a place to plug in, and said that if he’s going to be an electric vehicle driver in the future, then he’s hoping that more entities will try to do what’s happening in the park and add infrastructure for charging,” Perkins said.

The partnership, which began in 2017, intends to install 100 EV charging stations in and around 13 national parks across the United States, according to NPS.

Jennifer Reyes, general manager of the Courtyard Marriott Flagstaff, said the goal is to reduce the hotel’s environmental impact as well as the popularity of the location, near the junction of Interstates 17 and 40.

“You can get to pretty much any state from our location,” Reyes said. “(If) you go to California and Albuquerque – you name it – you pretty much have to come through this area, and then with Route 66 and everything that Flagstaff has to offer, it just kind of makes sense.”

Ken Sweat, a principal lecturer at Arizona State University who has studied environmental science, endangered species and plant biology, said the transportation sector is one of the largest sources of heat-trapping greenhouse gases. 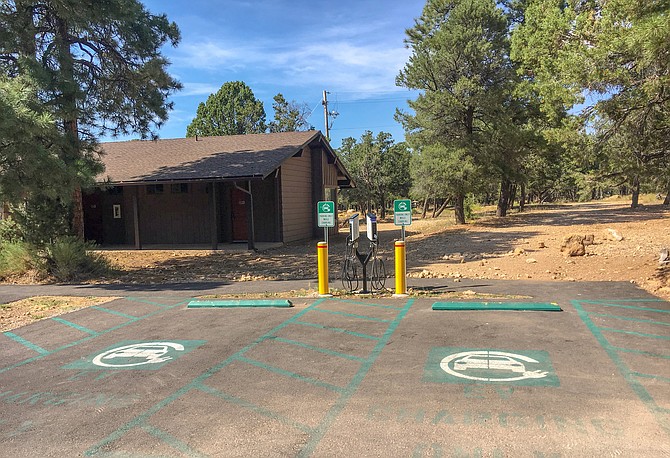 Visitors to Grand Canyon National Park can now charge their electric vehicles at six stations around the park, including Yavapai Lodge, Canyon Village Market and these two at Maswik North. (Photo by Michael Quinn/ NPS)

“Let’s be honest, we’re not giving up our cars, but we can have cars with all the horsepower and all the things we want, that don’t burn fossil fuels,” Sweat said. “And making them easier for people to use with things like chargers at the Grand Canyon and access to that kind of infrastructure is going to increase the acceptance of that technology by other people.”

Perkins said Xanterra plans for more than half of its vehicle fleet to be either hybrid or electric by the end of 2021, and it’s also expecting more requests for charging stations.

“I know that in our build of Maswik South, the new hotel, that we’re allowing for infrastructure to be in places that it will be easy for us to install charging stations in the future, as the demand increases,” Perkins said. “So we’re prepared for the likelihood that it will occur.”

Sweat said any moves to reduce the localized impacts of auto pollution is important for future enjoyment of the parks, especially with the increase in visitors to national parks.

“I tell you personally, going to the canyon with my family growing up (are) some of the best memories I have,” he said, “and to be able to keep allowing families to build those kinds of memories, we’ve got to make sure that we’re not radically altering the planet and making that place unrecognizable from what it was in the past.”

BMW of North America donated the new charging stations to the Grand Canyon and other parks across the country , such as Olympic National Park, Everglades National Park, and Cape Cod National Seashore, from Washington to Florida.

The first round of stations were installed at Thomas Edison National Historic Park in New Jersey after the launch of the project in April 2017.