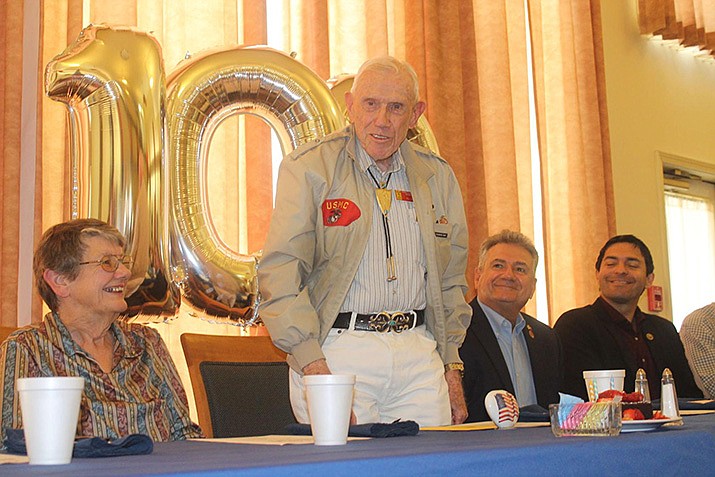 Al Long turned 100 years old on Monday, and the accomplishment was met with friends and multiple dignitaries wishing the newest centenarian a happy birthday during a luncheon at Prestige Assisted Living at Lake Havasu. (Photo by Michael Zogg/Today’s News-Herald)

“I never dreamed of ever reaching this age,” Long said. “You start out and go to combat in World War II you don’t know if you are going to come back or not. Then when you come back and go on I never thought I would reach 70. But you keep going and going. I never dreamt that I would reach 100, but here I am.”

Long received several honors throughout a short ceremony at Prestige Assisted Living including a special plaque from the Veterans of Foreign Wars for time in the Marines, he was also officially recognized by the Arizona State Senate, received commendation from the State of Arizona through a letter from Gov. Doug Ducey, and Lake Havasu City officially named Sept. 9 Albert Long Day in his honor.

“The members of the Arizona Senate do hereby honor and recognize him and his legacy of honor, service and devotion to this country,” Borrelli said.

State Rep. Leo Biasiucci was also on hand to read the letter from Gov. Ducey to mark the occasion.

“Be it known to all that I, Douglas A. Ducey, Governor of the State of Arizona, do hereby offer my sincere birthday greetings to Albert Long, an official centenarian,” Biasiucci read during the ceremony. “Arizona is fortunate to have you as a resident of this great state.”

In addition to members of the state government, Lake Havasu City Mayor Cal Sheehy also attended the event where he proclaimed Sept. 9, 2019 as Albert Long Day in recognition of the impressive milestone.

“On behalf of Lake Havasu City I want to extend my sincere appreciation to Albert Long for his unwavering dedication and service to our country, and for being a role model for our community,” Sheehy said.

Long was born in Billings, Montana in 1919 and also lived in California and Gallup, New Mexico before moving to Arizona in 1970. Long was a member of the U.S. Marines during World War II, serving as a Communication Specialist and electrical engineer in the Guadalcanal and New Britain campaigns in the Pacific.

After returning home, Long said he started working as an engineer for Lockheed Martin, eventually moving to several different related companies. It was during that time that Long’s affinity for sports cars began to grow. He said he has driven Ferraris, Jaguars, Corvettes and more, and he is still famous among his friends for driving a red Corvette around Lake Havasu City.

“I always had fancy cars and put up a good front,” Long said. “I was an engineer and I had to look like one.”

In 1967 Long received a Graduate Gemologist diploma and was admitted to the Master Gemology Association in 1986. His work as a gold and silver smith, along with gemstones, has earned him further recognition, appearing in “Arizona Highways” magazine and in shows such as the Scottsdale National, and the Inter-Tribal Ceremonial in Gallup, New Mexico.