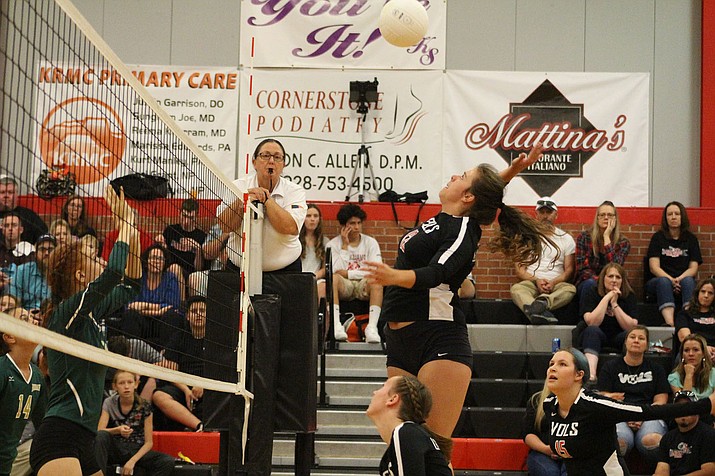 Lee Williams senior Kalyse Whitehead spikes the ball over the net Tuesday during a 3-0 sweep of Mohave. (Photo by Beau Bearden/Daily Miner)

KINGMAN – It is not very often a home opener is also your first region contest.

Most squads get at least one opportunity to work out the rust with a nonregion match, but the Lee Williams High School volleyball team had to jump right into 4A Grand Canyon Region action Tuesday night.

“It’s a relief to get that out of the way,” Lee Williams head coach Riley Blake said of the squad’s first region victory. “We’ve been looking forward to it. And it’s super impressive for us to come in and sweep it.”

The Lady Vols proved in the opening set that they were the better team by taking a 13-4 advantage, but Mohave slowly worked its way back to knot it at 17-17.

“We just need to come out and stay strong,” said Lee Williams senior Kalyse Whitehead. “We’re having one point affect us and letting it get in our heads. We just need to shake it off, keep going and get to the other points.”

Whitehead helped make sure the Lady Vols didn’t let Mohave take the lead as she tallied back-to-back kills for a 19-17 advantage. Lee Williams didn’t have much issue from there as it regained control and took a 1-0 lead in the match.

“Kalyse is a great go-to,” Blake said. “She definitely does her job and puts the ball away. She does her best to make that happen.”

The same could be said of the rest of the Lady Vols as they used a dominating team performance in the second set. Lee Williams jumped out to an early lead and didn't allow Mohave to mount another comeback. 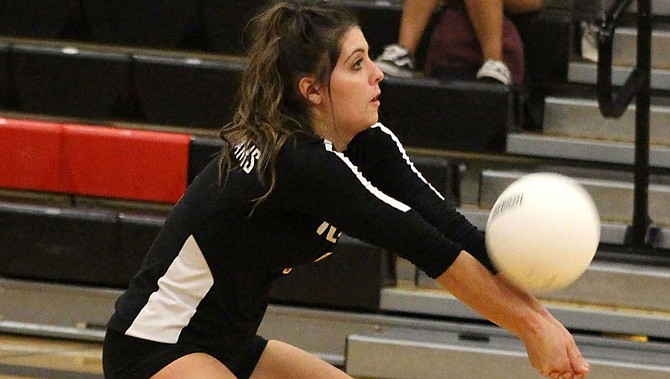 “We have a lot of talent in the front row,” Blake said. “They’re all very versatile, so I can put them wherever I need them. And they’re going to do their job well.”

The third set looked to be more of the same, but the Lady T-birds made it interesting late by scoring four straight points to cut their deficit to 23-18 and force a Lady Vols timeout.

The break from the action was all Lee Williams needed to regain its composure and finish off Mohave.

“It’s honestly exhilarating,” Whitehead said of getting the first region win of the season. “It feels really nice, but this was just a test for Coconino who we play Thursday. We’re really excited to come out and see what we can do against better teams.”