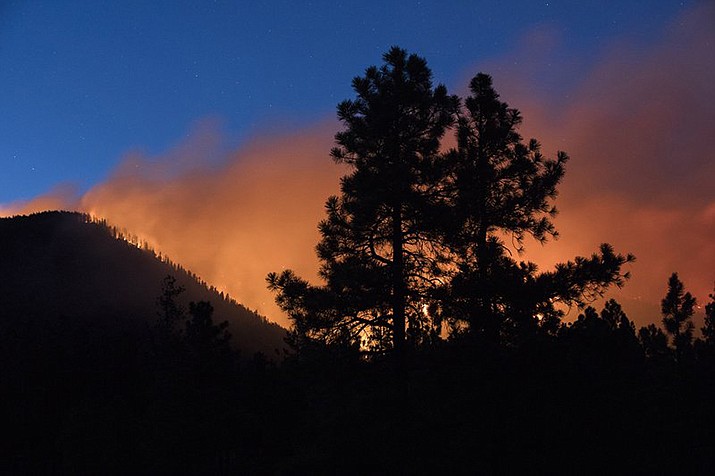 This July 21, 2019, file photo shows a wildfire burning through the Coconino National Forest, north of Flagstaff. Officials say the wildfire likely was started by a spark from a piece of heavy equipment striking a rock during a forest-thinning project. (Photo by Ben Shanahan/Arizona Daily Sun)

FLAGSTAFF – An excavator used to clear out parts of a northern Arizona forest to help prevent wildfires struck a rock, likely sparking a blaze that forced the evacuation of two dozen homes this summer, authorities said Thursday.

The excavator was working on steep slopes near Flagstaff in late July when it hit a rock, creating a heat source that stayed underground for more than half a day, the Coconino National Forest said.

Warm and windy conditions transformed it into a small fire the next morning that burned for three weeks.

Equipment that was used by the Oregon-based contractor conducting the work was in good, working order and had been inspected properly, safety officials reported.

The operator also stayed on site the required hour after shutting down to check the area.

"There is a risk in anything that we do in the forest, and we can never eliminate that entirely," said Paul Summerfelt, who oversees the Flagstaff Watershed Protection Project on the Coconino National Forest.

"This was an extremely unfortunate event, but it's not an event we can peg negligence or error or fault, he contiued."

The wildfire was declared fully contained Aug. 15, but not before charring 3 square miles. The cost to suppress the fire was around $10 million.

Voters in Flagstaff approved a $10 million bond in 2012 to thin the national forest around Flagstaff to protect water running off the mountains and to lessen the risk of a major wildfire.

The work started in 2016 and has been a mix of helicopter and cable logging, crews with chain saws on the ground and prescribed burns.

Work will resume in the next couple of weeks, Summerfelt said.

About 40% of the work in the Dry Lake Hills area where the fire started was complete. Some stacks of logs burned in the fire.

Michael Gardiner, assistant special agent in charge of law enforcement at the U.S. Forest Service's Southwestern Region office, said that fire investigators found small bits of metal while sifting through dirt and identified scrapes on the rocks. The scrapes, he said, matched up with the excavator.

Investigators also typically look for patterns in grass, twigs, rocks, logs and trees, and interview any witnesses to determine the origin of a fire, he said.

A wildfire southeast of Albuquerque, New Mexico, in 2016 started in a similar way and during work to reduce the threat of fire.

Forest officials said a machine that was shredding woody debris on a ridgetop likely struck a rock and sparked a wildfire that burned nearly 28 square miles.

The investigative report on the wildfire near Flagstaff won't be available for months, Gardiner said.