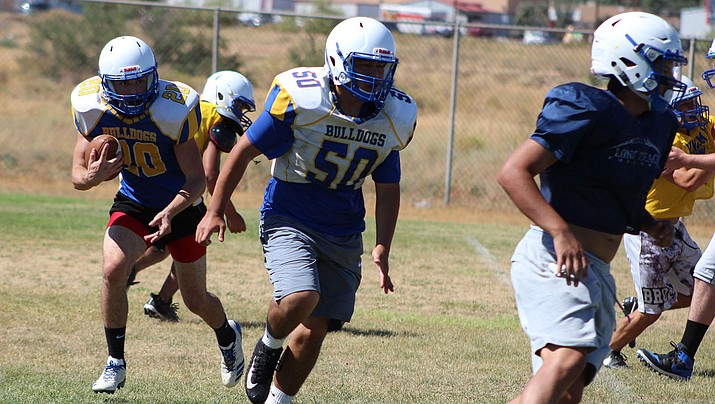 KINGMAN – A season ago the Kingman High School football team traveled to Valley Lutheran and picked up a convincing win to open the season at 3-0.

It won’t be as easy to accomplish the feat in 2019 though, as the Bulldogs scheduled a much tougher opponent – Santa Cruz Valley.

The Dust Devil finished No. 18 in the AIA’s final 2A Conference rankings a year ago and enter Friday's 7 p.m. game at 2-1.

“I’m looking forward to playing Santa Cruz Valley,” Kingman head coach Russ Stryker said. “It’ll be a really good test to see where we’re at as a program in our Week 3. I think it will help us a lot going forward.”

In order for the Bulldogs to jump out to another 3-0 start, they’ll need to stop Santa Cruz Valley quarterback Austin Hukill and his playmakers.

Hukill has already passed for 189 yards, three touchdowns and no interceptions.

“We have watched a lot of film on those guys,” Stryker said. “(Austin) Hukill is a good athlete – reminds me a lot of Levi Beckham (from Lee Williams). No. 30 (Hunter Ogle) is a junior running back and he’s good along with No. 2 (Arik Padilla). Their tight end No. 15 (Orlando Davis) is a big, physical kid.”

Ogle leads the Dust Devil with 212 yards and two scores, while Davis has caught eight passes for 96 yards and a touchdown.

However, Stryker believes Kingman has an advantage in one area.

However, Santa Cruz Valley is coming off a 48-13 loss on the road to Round Valley, while Kingman had an extra week to rest and prepare.

“It’s hard to keep kids focused for two weeks when they have a bye week – that’s the downside of it,” Stryker said. “The upside is it gives them a chance to get good and healthy. All the kids are healthy and ready to go.”

The Bulldogs also know there is a weakness they can pounce on as Santa Cruz Valley’s demise last week was special teams.

“They had four catastrophic special team plays – two of them were ran back (for touchdowns),” Stryker said. “That hurt them. And whenever you get down, then you start taking chances that maybe you wouldn’t ordinarily take.”

Stryker is well aware of the opportunity to capitalize and plans to take advantage of special teams miscues if they present themselves.

But the focus will be on what has worked thus far as Kingman rushed for more than 400 yards two weeks against Sedona Red Rock.