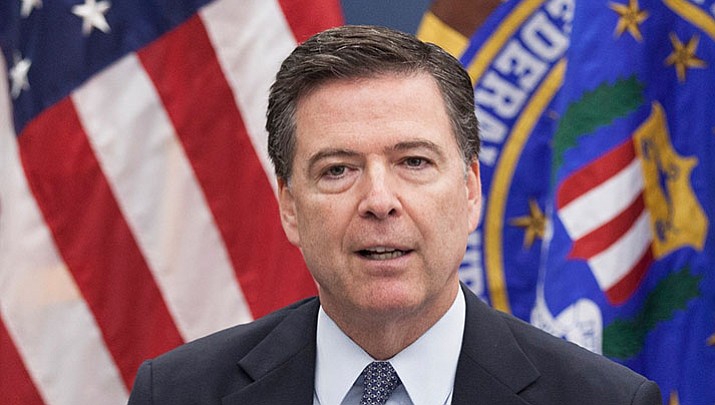 Cropped photo of FBI Director James Comey addressing members of the media during a press briefing held June 13, 2016 at FBI Headquarters regarding the recent mass shooting at nightclub in Orlando, Florida. (FBI photo)

To Call Comey a Clown Would Offend Carnival Community – Rep. Gosar nailed it. A reading of the scathing Comey report makes you wonder how Comey can ask for an apology. This report stood alone for a reason. Comey’s lying to the FISA court comes next; probably includes jail time.

Encroachment permit – Having a silo downtown would make Kingman look more like a hick town. The ugly Rickety Cricket building didn’t add one thing to our city. City should not allow the silo.

Who Won, and Who Lost, World War II – I so appreciate KDM purchasing columns from Pat Buchanan. He, like Newt Gingrich, continues to write, academically, about U.S. history (Buchanan 20th century, Gingrich 19th) from a U.S. patriot’s perspective, not a neo-Nazi, SJW, or socialist perspective. Keep this going!

Too Old To Be POTUS? – Trump jets the world (no jet lag); sleeps little, lives under 24/7 Democratic hatred and lies. Still smiling, still going because his goal is to restore his country to greatness, helping everyone. Biden exhibits daily gaffes, senility – never mentions goals.

Kerpin: Trump should end tax Pelosi once wanted to kill – Kerpin thinks we need to give millionaires and billionaires another tax break because they will be so grateful they will do something great for the working class? Believe that, and I have a bridge in Brooklyn to sell you!

Buchanan: Who won and who lost WW II – Pat doesn’t think the Russians are good guys; too bad Donald Trump did not get the memo! The Russian government is as ambitious and ruthless now as it was then! Wake up call, please!

Hunting – I will never understand the “thrill” of killing an animal for sport. Each and every time I see a photo in the Miner of some proud hunter smiling over an animal he has killed, it just gets more disgusting!

Gosar: ‘To call Comey a clown, would be offensive to the carnival community’
Comey: FBI probe of Russia initially looked at 4 Americans
Former US security leaders blast Trump for yanking clearance
Trump 'looking forward' to being questioned under oath
Comey: 'Possible' that Russians have leverage over Trump