Suicide prevention and the stigma surrounding mental health
Michele Conley, whose daughter Sami Voytilla took her life in January 2018, wonders if things could’ve been different had a stigma not existed around mental health 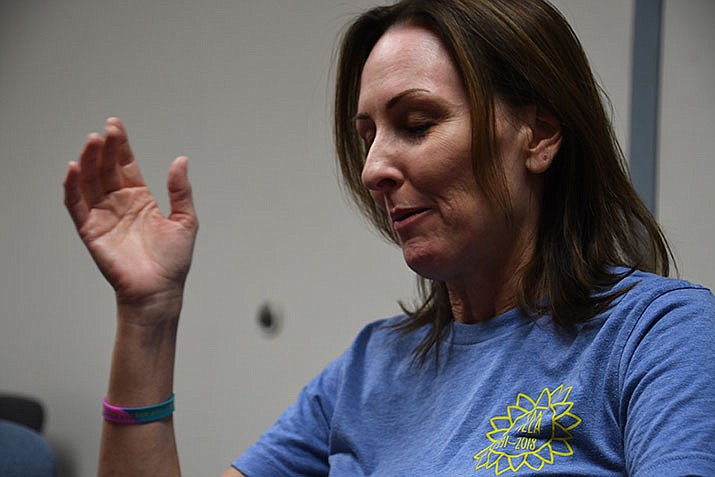 Michele Conley, whose daughter Sami took her own life in January 2018, speaks to how she believes the stigma surrounding mental health may have deterred her daughter from seeking help. (Photo by Vanessa Espinoza/Daily Miner)

Parents want the best for their children in all aspects of life, with most striving to do all they can to set younger generations up for success. But guardians all across the country, and at least one mother in Kingman, have experienced the tragedy of seeing promising futures disappear after losing a child to suicide.

“I feel like if Sami had felt she didn’t need to be the superstar who’s the rock for everyone, always wearing a smile, maybe she would’ve felt comfortable talking about mental illness or depression,” said Michele Conley, Sami’s mother.

For Conley, addressing depression or suicidal thoughts in loved ones means asking the tough questions. Most notably: Are you thinking about suicide?

“It’s extremely important, but it’s so difficult,” Conley said. “It’s not as difficult for me because I’ve lived in a land of regret since my daughter died, Jan. 5, 2018. And I say if suicide can happen to my daughter, it can happen to anyone.”

Sami Voytilla was 26 and living in Oregon when she took her own life. She was working a stressful job, and while sometimes anxious due to her career, had never really shown signs of depression or mental health issues. Sami would do whatever she could to help people when she was growing up, be it giving a friend a ride, chasing off bullies at school or providing a shoulder on which friends, and even strangers, could cry.

Conley described her daughter as a “bucket of sunshine.” Conley did have a mental health discussion with Sami about two years before her death, at which time nothing alarming was discovered. Now, she wishes she had followed up with her daughter, a recommendation she gives to others working through similar situations.

“She was that tip of the iceberg type of introvert where even though she was so bright and shiny, friendly and compassionate, you only ever saw 10% of who she was,” Conley said.

Her daughter’s death was a “kick in the teeth like I’d never felt before in my life,” Conley said, even though she is no stranger to loss.

“I know loss, I’ve lost a lot of friends, family,” she said. “This was so different than any other grief process I have ever experienced. It’s super complex when it’s your child and when it’s suicide.”

Suicide rates in the United States continue to climb, according to a National Center for Health Statistics analysis of data from the National Vital Statistics System, which can be found on the Centers for Disease Control website at this link on apa.org. Between 2000 and 2016, the rate of death by suicide in the U.S. increased by 30%. That figure is an increase from 10.4 out of 100,000 people to 13.5.

Later that day, he signed the Mitch Warnock Act, which will see guidance counselors, teachers, principals and other school personnel receive “expanded training in suicide awareness and prevention,” the release states.

The American Foundation for Suicide Prevention notes that suicide most often occurs when stressors and health issues combine to create an “experience of hopelessness and despair.” People should watch out for, both in themselves and loved ones, changes in behavior or new behaviors, especially if that change results from a painful event or loss.

Experts say moods, behaviors and verbal expression scan indicate a potential for mental health issues or suicide. According to ASFP, those include: talking about killing themselves, feeling hopeless, having no reason to live, being a burden to others, feeling trapped or experiencing unbearable pain.

When it comes to behavior, look out for increased use of alcohol or drugs, searching online for methods of suicide, withdrawing from activities, isolating from family and friends, aggression, fatigue, sleeping too much or too little and visiting or calling people to say goodbye.

Another important piece of the conversation for Conley is to note that “you’re never a burden,” which is a sentiment sometimes expressed by those struggling with mental health issues.

Information on suicide, and suicide awareness and prevention is easily accessible by way of the internet. To learn more, go to https://afsp.org/ or https://www.cdc.gov/. For support, text TALK to the crisis text line at 741741. The National Suicide Prevention Lifeline can be contacted for free at 1-800-273-8255.

“I really think my daughter thought she could get through it until she had a crisis of more pain than she had hope, and more pain and hopelessness than she had resources to cope with,” Conley said.

The statement above feeds into Conley’s belief that perhaps one reason her daughter did not reach out to speak with someone about what she was going through was due to the stigma surrounding mental health. She said her daughter was strong, but that she wishes Sami would have “had a crack in that armor.”

“To strong people, crack your armor,” she said. “Please share with us what you’re feeling. I can’t say that people won’t speak to you different from time to time, but if we all start speaking up, especially high-functioning people who perform and don’t look like they have a crack in their armor, if those people start speaking up maybe we can stop the stigma. If we can stop the stigma, how many lives can we save?”