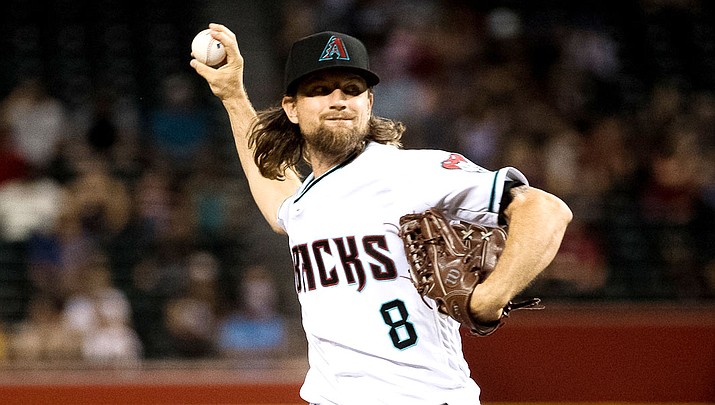 Mike Leake allowed four runs in six innings of work Friday night as the D-backs lost their sixth straight in a 4-3 setback to the Reds. (Photo courtesy of Sarah Sachs/Arizona Diamondbacks)

PHOENIX (AP) – Joey Votto turned 36 years old earlier this week and has battled a bad back that sent him to the injured list for a decent chunk of August.

But if age is starting to catch up with him, it's hard to tell.

"He's done it his whole career," Cincinnati Reds manager David Bell said of Votto. "He's always working on it, trying to improve and making adjustments. He's in a good place. It'd be great to have him finish strong and take it into next year."

The Diamondbacks lost their sixth straight to tumble further out of the NL wild card race. They won 11 out of 12 from Aug. 25-Sept. 7 to pull within 1½ games of the second wild card spot, but are now 4½ behind the Chicago Cubs with just 14 to play.

The Diamondbacks pulled within 2-1 in the fourth before VanMeter launched a two-out, two-run homer to extend the Reds' lead. Both runs were unearned because of an error by second baseman Wilmer Flores.

"We knew with Luis on the mound he would hold them to little or nothing," VanMeter said. "It was nice to get those four runs and it ended up being the difference."

Raisel Iglesias pitched a scoreless ninth, working around Ketel Marte's two-out double, for his 30th save. Michael Lorenzen pitched two scoreless innings of the relief in the seventh and eighth, striking out two.

"It is unfortunate we couldn't get another big hit at a crucial time," Arizona manager Torey Lovullo said. "We hit some balls very, very hard from an offensive standpoint. The Reds made some big defensive plays.

Castillo (15-6) gave up two runs over five innings, striking out three to push his season total to 211. The Reds have won four of his last five starts.

Mike Leake (11-11) threw six innings for the Diamondbacks, giving up five hits and four runs (two earned). The bullpen pitched three scoreless innings to keep them in the game, but hits were hard to find.

The Diamondbacks announced before the game that they've extended the contract of GM Mike Hazen. The team didn't release details of the extension. The 43-year-old was hired in 2016 and has kept the Diamondbacks competitive in the NL Western Division, though they've finished behind the Dodgers each year.

Hazen's name had been linked to the GM opening with the Boston Red Sox after they fired Dave Dombrowski. Hazen worked in the Red Sox front office before being hired by the Diamondbacks.

D-backs: Luke Weaver (4-3, 3.03 ERA) threw two scoreless innings on Friday in a rehab assignment in Single-A Visalia. The right-hander hasn't pitched in the big leagues since May 26 because of forearm tightness.

Reds: RHP Anthony DeSclafani (9-8, 4.06 ERA) is scheduled to start. He's pitched at least six innings in each of his last four outings and has a 2-1 record with a 2.32 ERA over his last five starts.

D-backs: RHP Merrill Kelly (10-14, 4.68) will start for the first time against the Reds. Kelly's spot rotation was in peril a few weeks ago, but he's been better in his last two outings, giving up three earned runs over 13 innings.