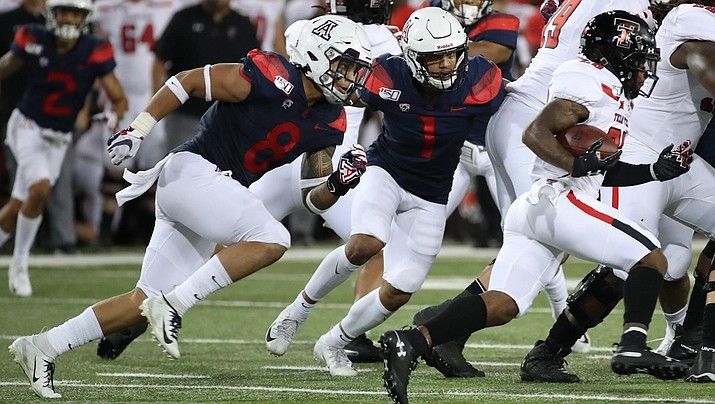 TUCSON (AP) – Arizona scored one touchdown on a bursting run, hit some chunk plays in the passing game.

When it mattered most, the Wildcats played the power game — and Texas Tech was helpless to stop them.

Arizona ran the ball 13 straight times during a 99-yard drive in the fourth quarter and Gary Brightwell capped it with his second touchdown, lifting the Wildcats to a 28-14 win over Texas Tech Saturday night.

"They imposed their will on us," Red Raiders coach Matt Wells said. "That's tough to take."

Khalil Tate accounted for 314 yards and two touchdowns, including an 84-yard run, and Arizona (2-1) racked up 499 total yards in what was expected to be an offensive showcase in the desert.

The deciding drive was power-driven.

Backed up to their 1-yard line in the fourth quarter, the Wildcats ran the ball right down the Red Raiders' throat, 13 times in all until Brightwell scored on a 1-yard run with four minutes left.

"To go 99 yards to win the game, that is a step that should give us confidence heading into conference play," Arizona coach Kevin Sumlin said.

The Wildcats also bounced back from shaky defensive performances their first two games, keeping Texas Tech's vaunted passing game under control most of the night.

Texas Tech couldn't hold its ground against the Wildcats after that, pushed around during two fourth quarter drives capped by Brightwell 1-yard touchdowns.

"We just physically wore down," Wells said. "Teams that run the ball like Arizona, they make the pay."

Texas Tech has had one of the nation's most prolific offenses since the Mike Leach days and won its first two games by a combined score of 83-13.

The Red Raiders and Wildcats had four turnovers in a span of five possessions in the first quarter: Two Bowman interceptions, a fumble and interception by Tate.

Tate followed with an 84-yard touchdown run, but the offenses went dormant again for the rest of the half.

"Everyone expected this big offensive game, but both defenses played well," Wells said.

Texas Tech was solid defensively in two opening wins, but got shoved around by Arizona in its first big test of the season.

Arizona appears to be back on track after an opening loss to Hawaii and a shaky second-half defensive performance last week against Northern Arizona.

Texas Tech lost one of its starting defensive backs in the second quarter when cornerback Desmon Smith was ejected for targeting.

Smith was called for a personal foul when he lowered his head to tackle Berryhill on a 22-yard gain. Smith hit Berryhill helmet to helmet and was ejected following a video review.

Tate put himself in the Heisman Trophy conversation with his running and passing ability as a sophomore in 2017. Hampered by injuries and a new offensive system, he wasn't nearly as effective last season, rarely taking off on runs.

Tate gave Arizona fans a flashback with his second quarter run, making one defender miss and sprinting past two more on his 84-yard touchdown.

"We put some more run plays in this week," Tate said. "We knew that would be an X factor this week, allowing me to use my legs more."