Prep Football: Bulldogs use ground attack to notch 3rd win of the season 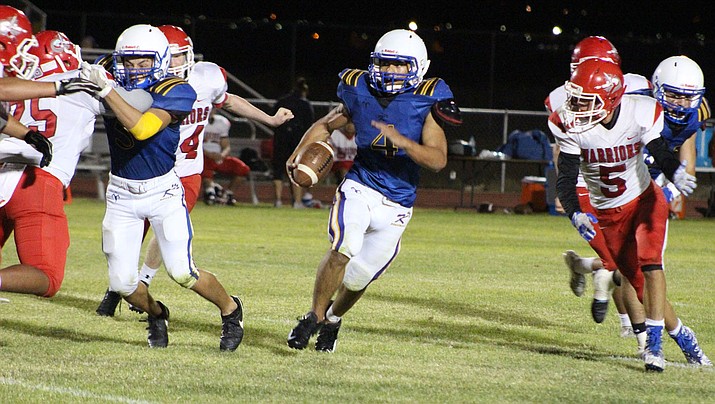 KINGMAN – It is no secret that the Kingman High School football team enjoys running the ball.

The Bulldogs have already racked up more than 1,300 yards on the ground, but they’ve done it with a team-first mentality and that was the case Friday night in a 46-33 victory over American Leadership Academy – Ironwood at KHS.

“The offense is not built around one guy,” Kingman senior Gavin Randall said. “As a group, we’re working together. We’re a unit, not an individual-working team.”

Randall lived up to those words as he entered the game as the Bulldogs’ leading rusher, but he had little issue sharing the ball when Austin Dias was on a roll.

“We both work together well, we make a good pair,” Randall said of Dias. “Two peas in a pod.” 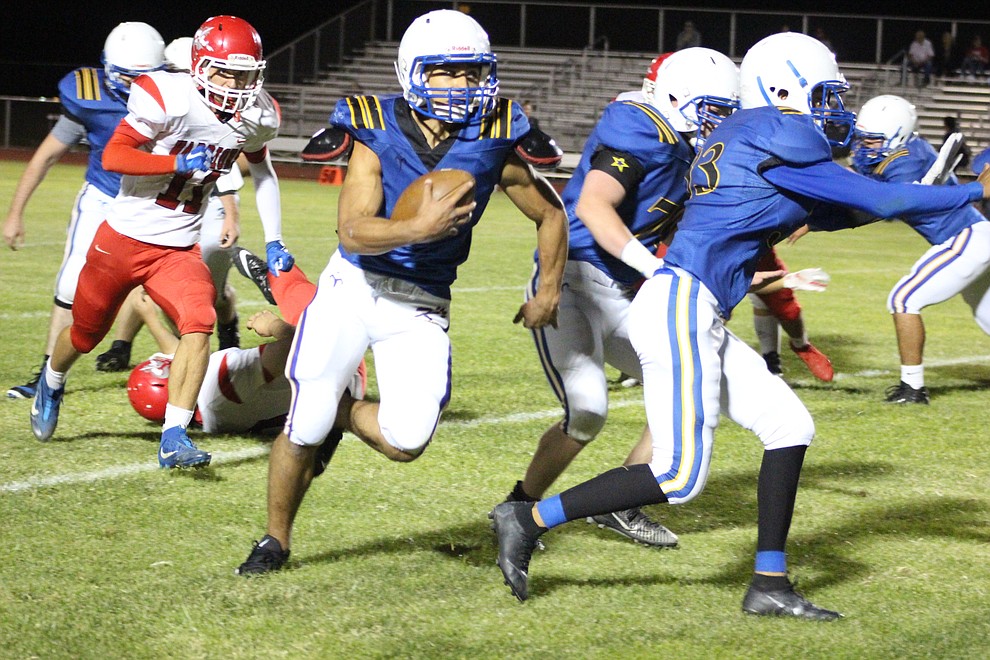 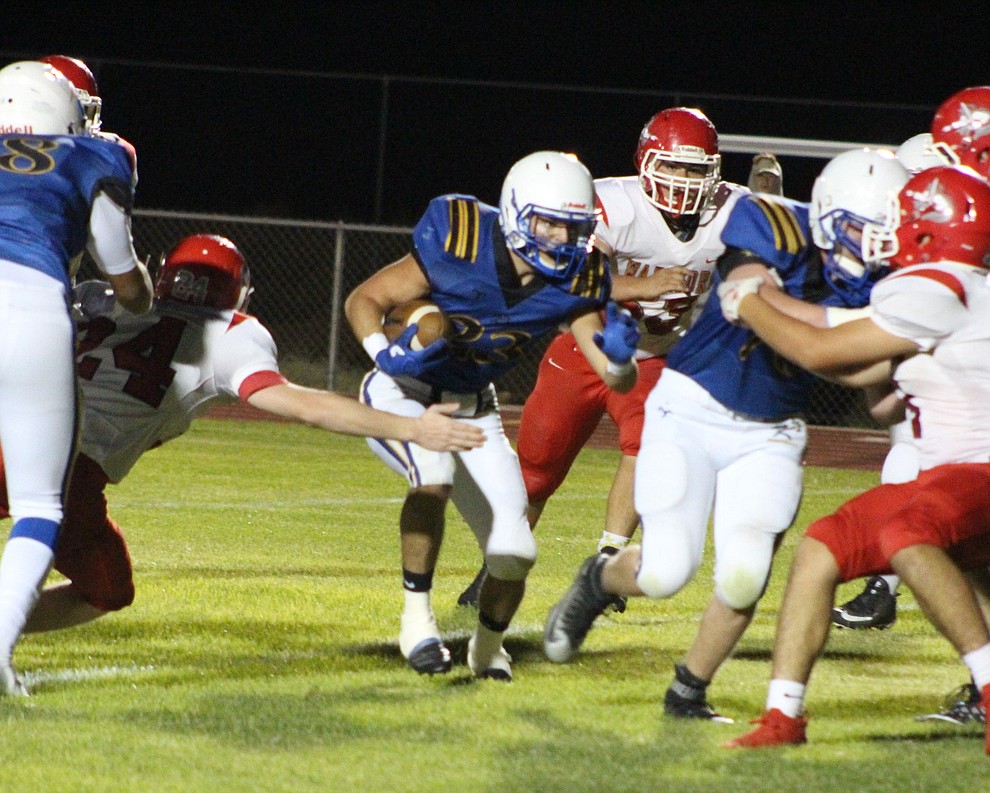 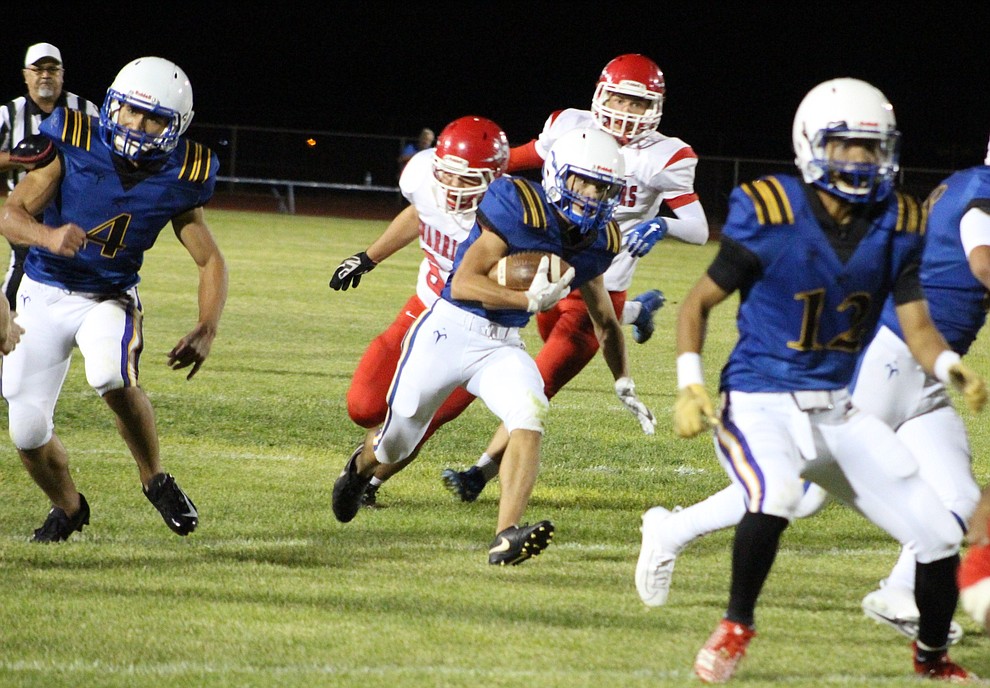 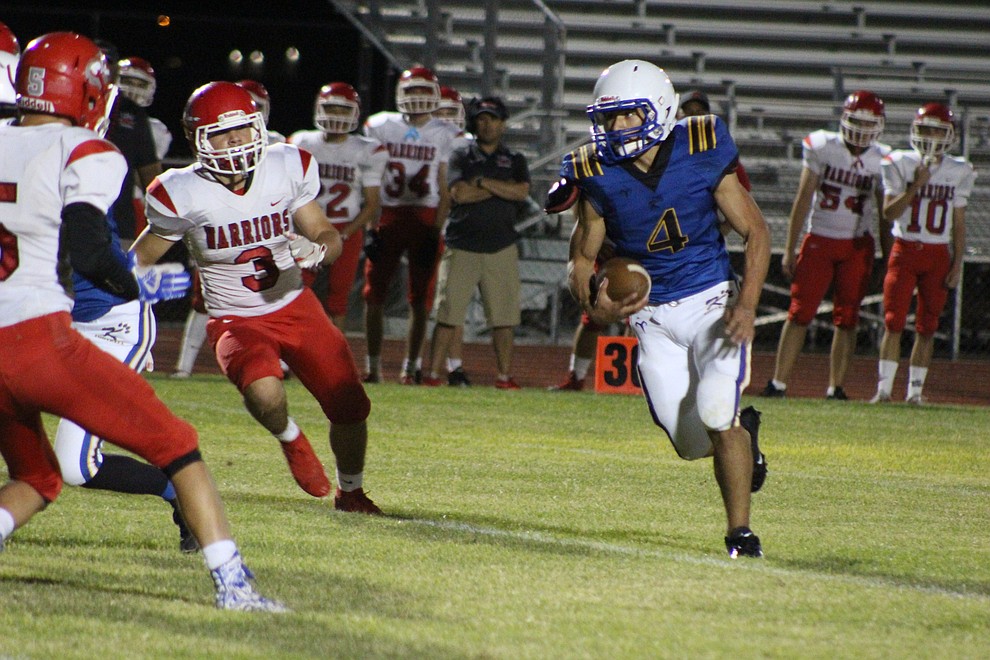 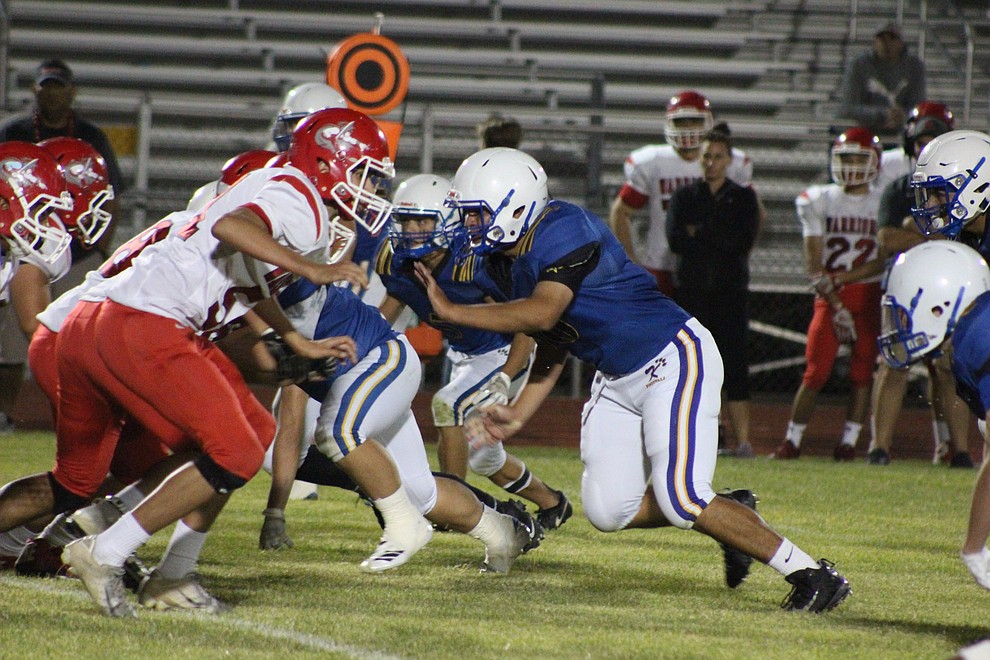 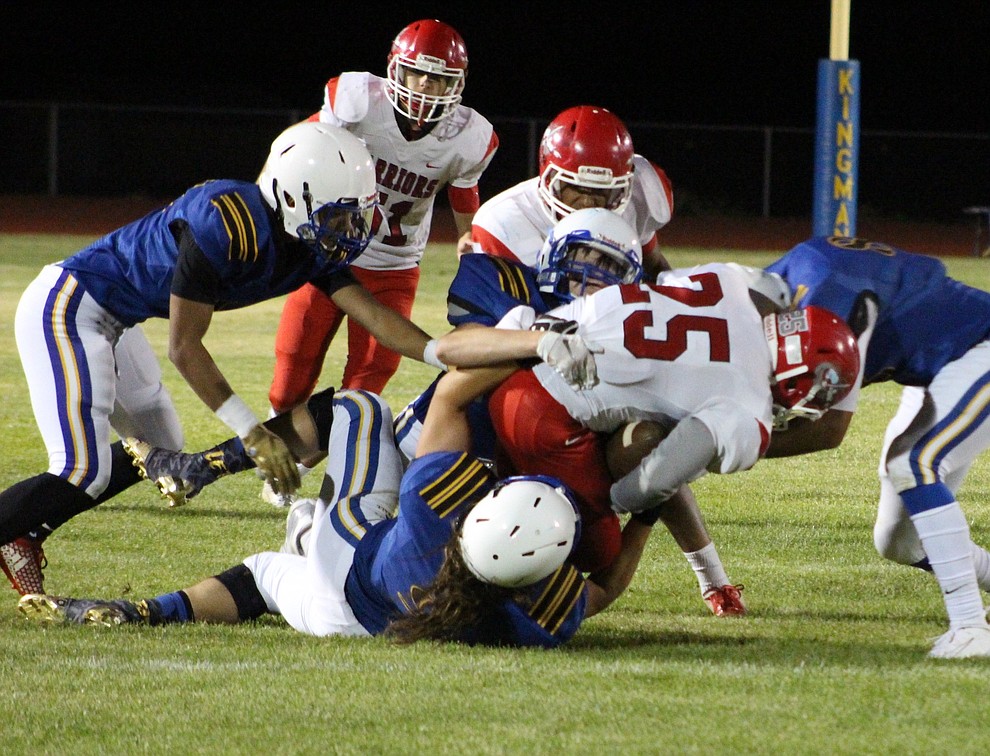 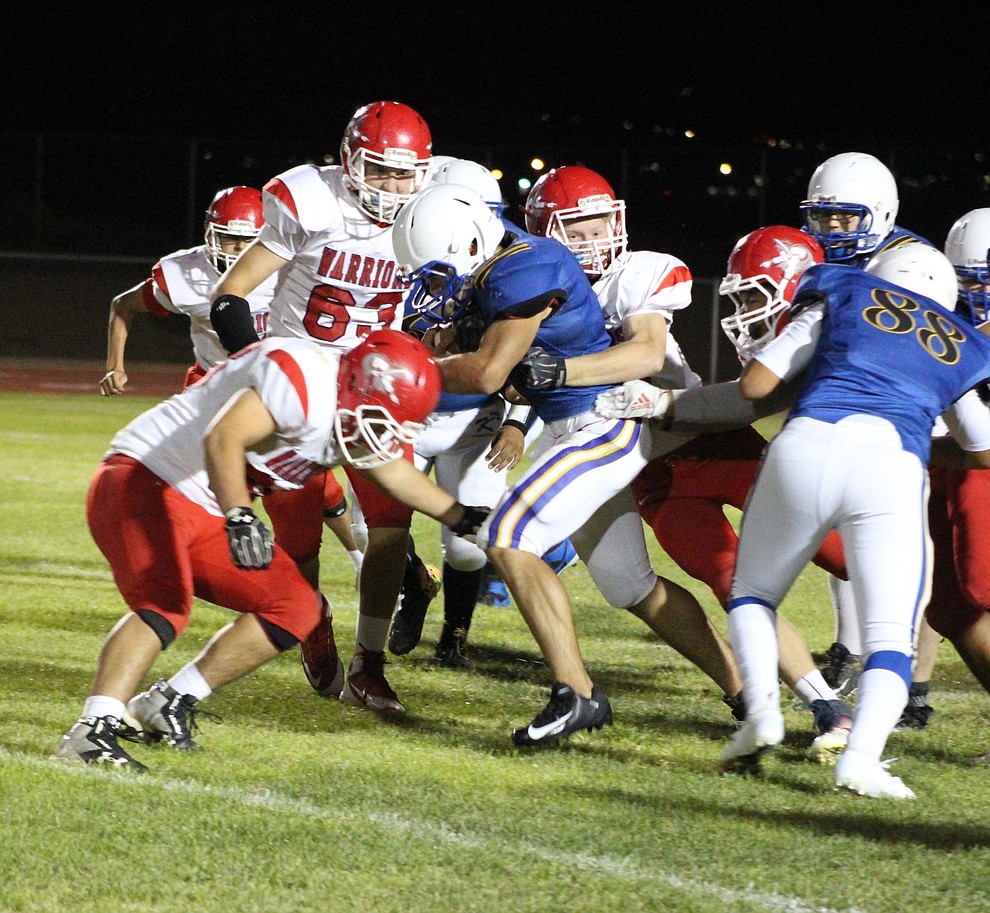 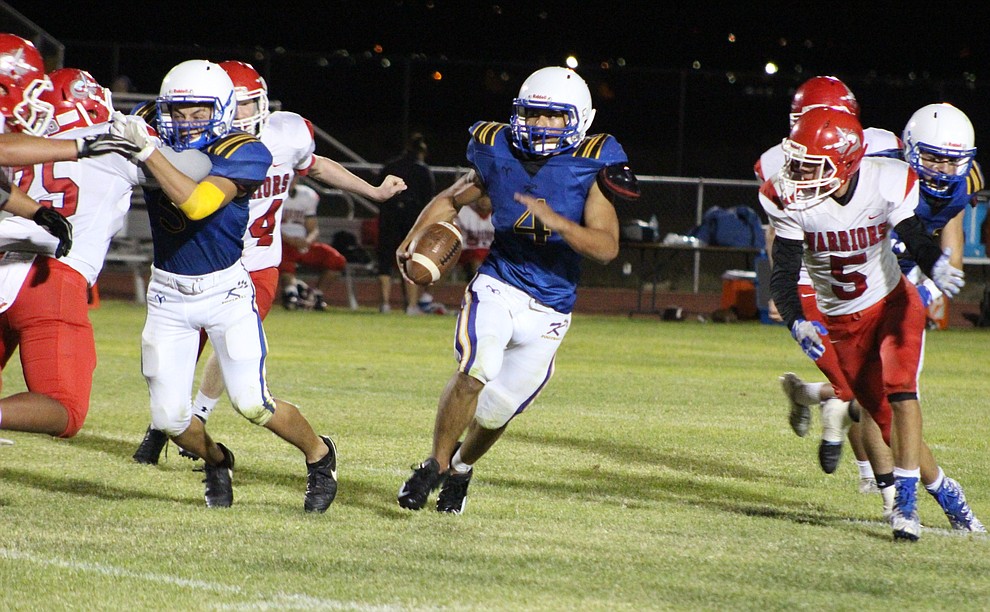 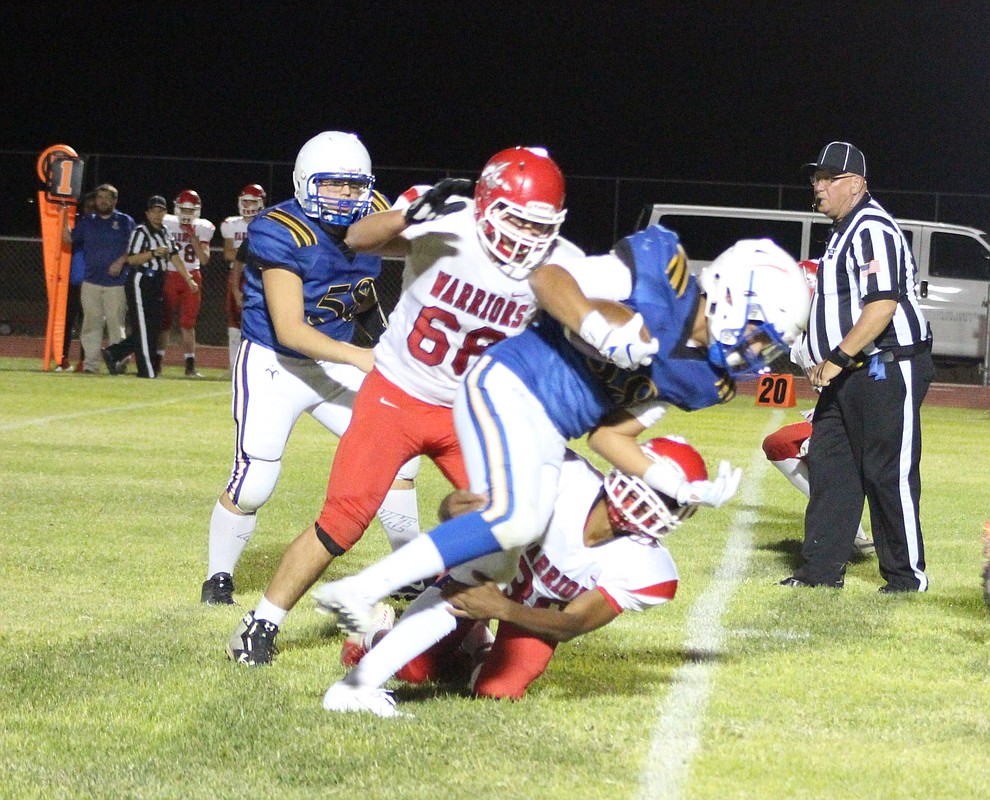 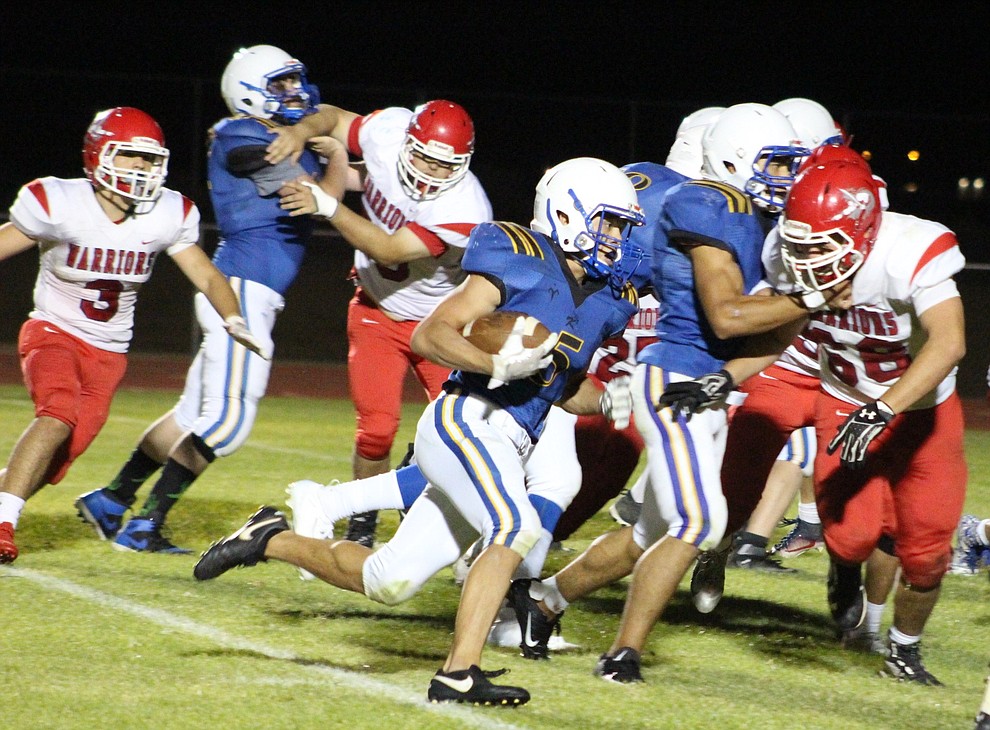 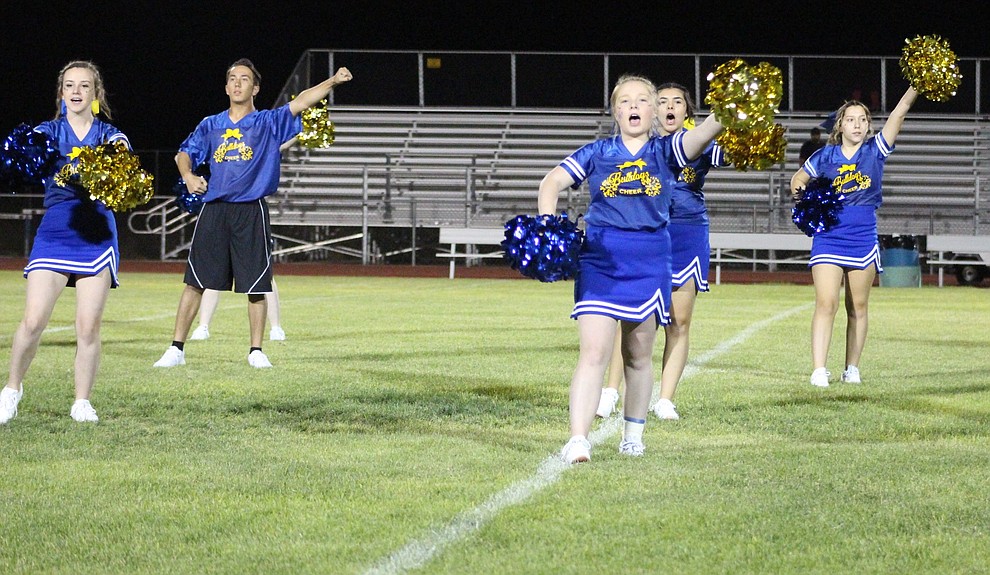 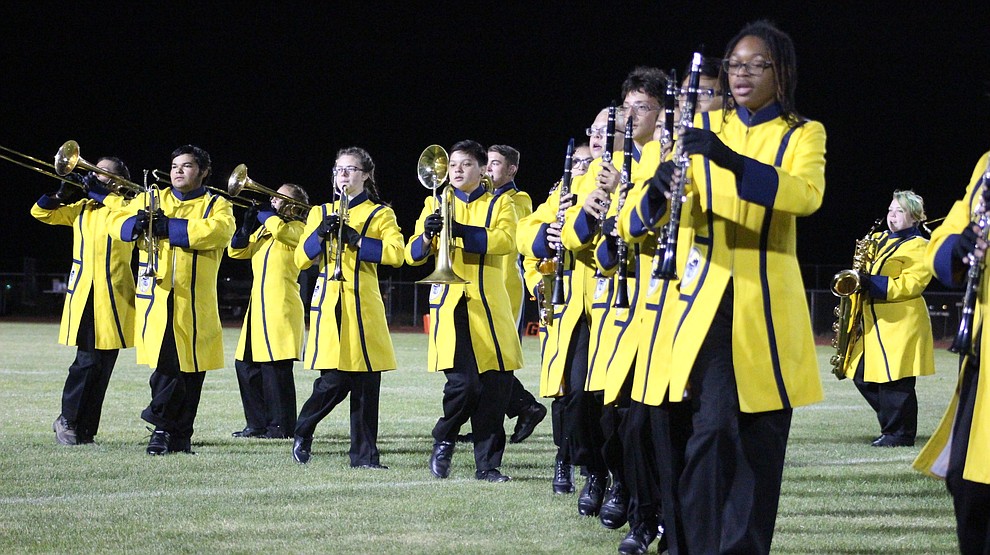 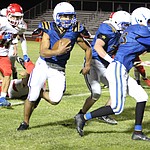 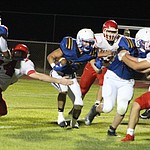 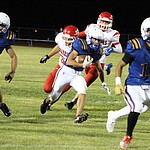 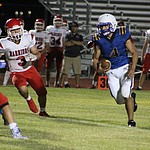 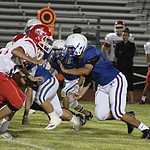 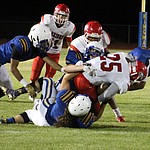 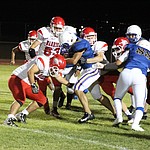 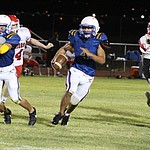 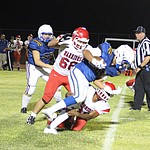 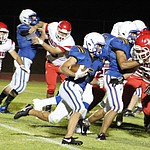 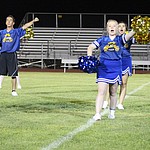 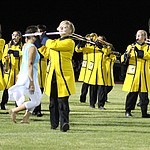 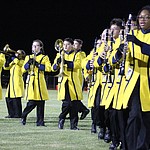 Dias agreed and the senior is glad to have his classmate in the backfield. The duo is tough to stop, too – combining for 317 of Kingman’s 371 rushing yards against the Warriors.

Randall carried the ball 13 times for 129 yards and two touchdowns, while Dias racked up 188 yards on 23 carries and tallied the Bulldogs’ final two scores to clinch the win.

“Austin was a workhorse this time,” Kingman head coach Russ Stryker said. “When you go into power mode, you want a guy that can hold onto the rock. He’s not going to fumble. So that was part of it. I really, really trust Austin running the football.”

Ball security was especially crucial as the Bulldogs fumbled on their opening drive and ALA-Ironwood capitalized on the good field position to take its only lead of the game 7-0.

Kingman quickly responded as Charles Williamson punched in for six points and Joey Drumright converted the two-point conversion for an 8-7 advantage.

That game plan didn’t change as the Bulldogs kept running the ball and pushed their lead to 22-7 on Joey Drumright’s four-yard run and Randall’s one-yard scamper and two-point conversion.

It appeared the momentum was shifting in Kingman’s favor, but the Warriors tacked on eight points to cut the deficit to 22-15 at the half.

ALA-Ironwood carried that success over to its first drive of the second half to inch within one point, 22-21, but Kingman didn’t let its opponent get any closer.

But the Bulldogs didn’t just cruise to victory as the fourth quarter was a back-and-forth battle. Both squads traded touchdowns down the stretch until Dias’ four-yard scamper with 3:13 remaining sealed Kingman’s third victory of 2019.

A win would match Kingman’s win total from the 2013 season, but that is far from the team’s focus.

“The biggest thing is just heart,” Stryker said. “They make mistakes, I make mistakes and the coaching staff makes mistakes. Everyone makes mistakes, but if they don’t give up, we’re sure not going to give up on them. As long as they can just work on this momentum and stick together, I think we’ll be alright.”