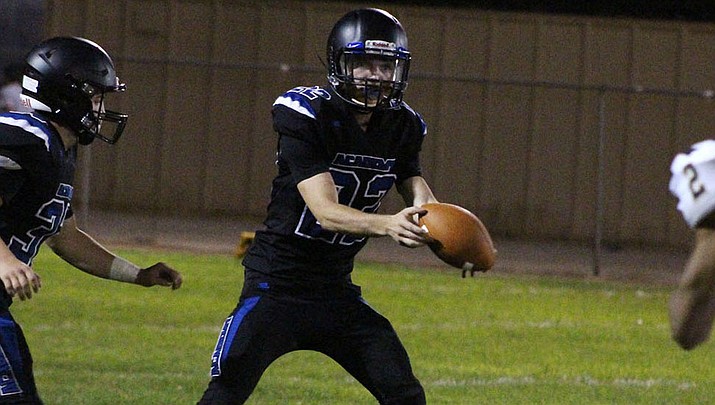 KINGMAN – Charlie Anderson single-handily made sure the Kingman Academy High School football team notched its first win of the season.

The junior quarterback was firing on all cylinders as he accounted for eight touchdowns Friday night in a 62-22 win at Coronado.

“Charlie had a great game,” Tigers head coach John Morgando said. “He played on both sides of the ball and he was our kicker and punter in this game. That’s a big deal and to score so many times – he was responsible for nearly every score one way or another as quarterback.”

Anderson completed 10 of his 16 passes for 226 and five touchdowns, while adding 101 yards and a score on the ground.

He also returned two interceptions for six points and forced a fumble that led to a touchdown.

Dallas Edwards was Anderson’s favorite target as the senior finished with 157 yards and three touchdowns. Gabe Imus and Hayven Potter also caught touchdown passes, while Isaac Carter rushed for 104 yards and a score.

“It’s nice to get a win before we get to region play,” Morgando said. “It give the kids a little bit more confidence to see that they can do things well and be an explosive team. Hopefully they can build on that and carry it forward to the next few weeks.”

The Tigers (1-2) are back in action at 7 p.m. Friday when they host Bourgade Catholic (3-1) at Southside Park.

At Bradshaw Mountain, a slow start proved costly Friday night as the Vols couldn’t complete a comeback in a 35-20 loss to the Bears (3-2, 1-0 4A Grand Canyon Region).

Lee Williams scored 20 unanswered points to cut its deficit to 28-20, but the rally came up short.

“Our kids were resilient and showed that they are going to fight,” Vols head coach Patrick O’Boyle said. “I do give our kids a lot of credit for fighting and coming back. We gave ourselves a chance to win it. It is what it is for the first half, but I’m very, very proud of the way our kids competed in the second half and got back into the game.”

The comeback started with Devean Santos’ 49-yard strike down the left side to Kameron Toms for a touchdown. Luigi Garibaldi then recovered a botched punt in the end zone for six points, followed by Donnie Simms’ 62-yard scamper for a score.

All three plays occurred in the final 3:44 of the third quarter and gave Lee Williams a fighting chance.

“We just started executing a little better and we kind of toned down our mistakes,” O’Boyle said. “Again, just taking responsibility for our actions and being accountable.”

But when the clock hit zeros, the Vols were on the wrong side of the score and suffered their first region loss.

“We talked to our kids about it, ‘we have to start faster – we can’t get down in a 28-0 hole and expect to win games,’” O’Boyle said. “You’re not going to win many games being down that much. And we told our guys, ‘It’s refreshing to see that we don’t give up.’ We gave ourselves a chance to win at the end, but we put ourselves in too big of a hole to do that. But our kids know we can play with anybody.”