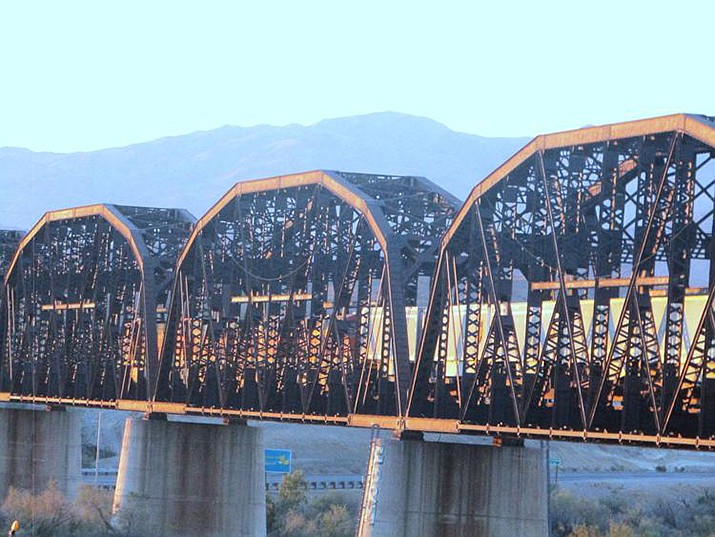 The Arizona & California Railroad had their bridge over the Colorado River open by Saturday evening. Here, the lead locomotives on a Burlington Northern-Santa Fe container train make their way across the bridge with a long line of containers behind them. (Photo by John Gutekunst/Today’s News-Herald)

The Arizona & California Railroad wanted to have their bridge over the Colorado River at Parker open again this past weekend, and they made their goal. The bridge was open again on Saturday evening.

One of the first trains across the bridge was one of those long westbound container trains run by Burlington Northern-Santa Fe. The seemingly endless train of single- and double-stacked containers moved slowly across the bridge, but it was moving. The train was so long, it required four extra diesel locomotives in the middle of the train to keep it moving.

The bridge was damaged when it caught fire the evening of Sept. 14. Genesee & Wyoming is the parent company of the Arizona & California.

Michael Williams, G & W’s Vice President for Communications, said in an e-mail Wednesday that the bridge did not suffer much structural damage in the fire.

“The damage to the timber approaches was mainly charring and not structural,” Williams said. He added the railroad is replacing significant warped rail and several hundred wood ties.

The bridge was built in 1908 as part of a line from Matthie, Ariz., which is near Wickenburg, to Cadiz, Calif. It was operated until 1991 by the Atchison, Topeka & Santa Fe Railroad. The AT&SF, or simply the Santa Fe, is now Burlington Northern-Santa Fe.

Mary Hamilton of the Parker Regional Commerce & Tourism said the line is important to commerce between Arizona and California.

“We have a lot of commerce on that line,” she said. “We’re an important part of the gateway between Arizona and California.”

According to the Genesee & Wyoming website, the A & C’s principal commodities are agricultural products, construction products, lumber and petroleum products.

The largest shipper on the A & C is Rose Acre Farms’ Lone Cactus Egg Farm south of Bouse.

Genesee & Wyoming operates 120 short railroad lines in the U.S., Canada, and Australia. They operate over 15,000 miles of track. They also have operations in Europe. Their headquarters is in Darien, Conn.