Prep Football: Tigers look to keep it rolling against Bourgade 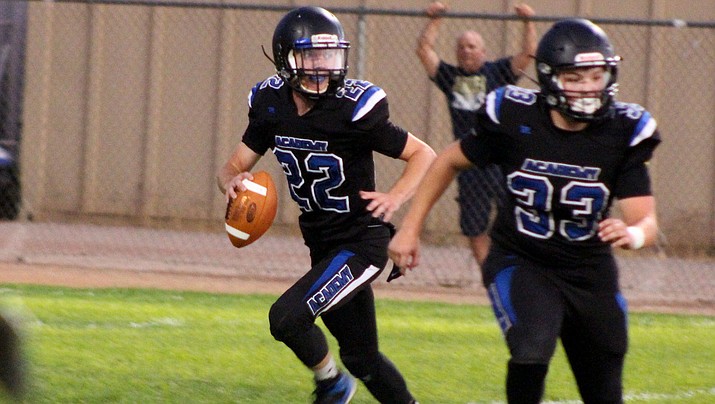 KINGMAN – It is never easy for a squad to practice when there are not enough athletes for 11-on-11 drills.

The Kingman Academy High School football team has dealt with that inconvenience this season and it has taken a toll in a number of ways.

“It’s difficult, not going to lie,” said Tigers junior Charlie Anderson. “Practices are rough. You don’t have the best competition to play against in practice, but you just have to work with what you got.”

Despite the lack of athletes, Academy persevered and picked up its first win of the season last week in a 62-22 victory over Coronado.

The Tigers (1-2) hope to keep that success rolling when they host Bourgade Catholic at 7 p.m. Friday at Southside Park.

But Academy isn’t looking that far ahead just yet, as the Tigers have a history with the Golden Eagles.

This will be the fifth meeting between the two squads and two of the last three games were decided by eight points.

“We’ve been playing them for years,” Academy head coach John Morgando said of Bourgade. “Last year was the first year we’ve been to their place and this is the first year they’ve been to our place. It’s a weird dynamic that it’s always been a neutral site with them. Hopefully that plays into our advantage. It’s a team we’ve always competed with pretty well and never beat.”

Academy hopes to end that losing streak, but it won’t be easy.

The Golden Eagles (3-1) have scored 45 or more points in their last three wins after losing to Coolidge in the opener.

Bourgade quarterback Louie Lopez has played a big role in that success – racking up 777 yards and eight touchdowns through the air with only one interception.

“They have the Lopez kid back – he’s a good quarterback and he has a pretty good arm,” Morgando said. “He knows his offense pretty well and makes some pretty good reads. They’re a pretty balanced team. So we kind of have to prepare for everything, which makes it a little harder.”

However, the Tigers have an answer in Anderson. The junior quarterback passed for 226 yards and five touchdowns, while also rushing for 101 yards and a score.

Anderson’s success helped Academy get its first win and Morgando hopes it is the start of something more.

“It would be a good win to knock off Bourgade, they’re always a pretty good team,” he said. “We have the confidence of having won last week. Hopefully we can build upon that and continue to do some of the things well that we were doing well last week.”