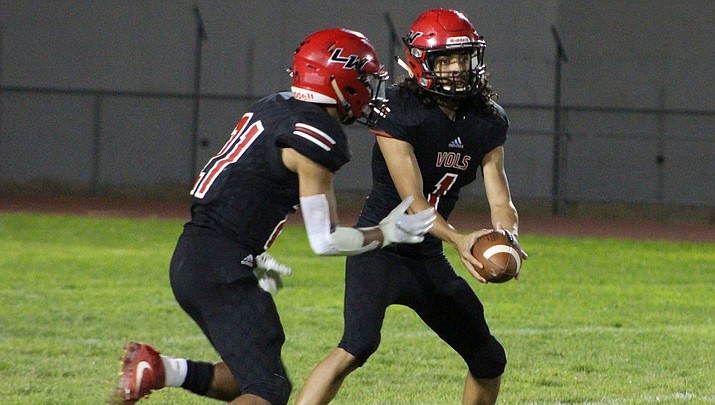 KINGMAN – It took less than four minutes for the Lee Williams High School football team to score 20 unanswered points on the road last week. While it wasn’t enough for the Vols to notch a win over Bradshaw Mountain, it showed they have the ability to play with anyone in the region.

“That was really great for our team to work like that,” Lee Williams senior Garrett Pfaff said. “That’s the best we’ve looked all year. And for us to do that all four quarters, it will just be amazing.”

“They’re still a good team, they have great players,” Pfaff said. “We just have to keep our heads straight and do what we can do to the best of our ability.”

Pfaff isn’t the only one to feel that way.

Lee Williams head coach Patrick O’Boyle knows Mingus is a lot better than their record indicates. The Marauders were 4A Grand Canyon Region champions a year ago after winning the tiebreaker with Prescott.

“We can’t get too caught up in an opponent’s record and that goes for anybody,” O’Boyle said. “Yeah Mingus’ record is what it is, but they’re still a pretty good team. They’ve played some really good teams. And they have a great program – they have a long-storied tradition there. So they’re going to come ready to play and we have to be ready to play as well.”

Marauders running back Andrew Meyer will be the one to stop as the junior has racked up 441 yards and three touchdowns. However, Mingus quarterback Zachary Harrison has caught the Vols’ attention.

“Their quarterback is very good – he gets the ball out quick,” O’Boyle said. “And they have some really, really fast and talented receivers. So we’re going to have to be very sound, disciplined and tough. We’re going to have to play tougher than we did in the first half last week. I have the utmost confidence in our team that we can.”

Lee Williams has depended on Wesley Boyd to do most of the heavy lifting on the offense with a team-high 317 rushing yards and two touchdowns. However, Donnie Simms tallied his first score of the season last week on a 62-yard scamper.

Boyd and Simms will look to continue their success, but the Vols know the game will be won in the trenches.

“We have to be better up front and better on the edge – that’s where it starts,” O’Boyle said. “If we can handle the line of scrimmage, that’s where we’re going to control this football game.”