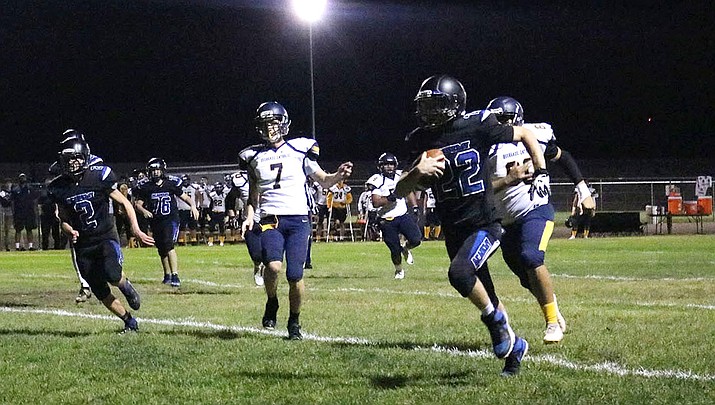 KINGMAN – If the start of the game was any indication, it appeared the Kingman Academy High School football team would be in a back-and-forth battle with Bourgade Catholic.

That wasn’t the case, however, as a tie game after the first quarter didn’t tell the rest of the story Friday night as the Tigers suffered a 58-13 loss at Southside Park.

“We had some miscues – we didn’t tackle very well,” said Academy head coach John Morgando. “We let them out of our grasp quite a bit. Their quarterback is pretty elusive in the pocket, but we just did not tackle as well as we needed to.”

The Tigers kept it close in the first quarter as the game was tied 7-7, but the Golden Eagles quickly pulled away with three touchdowns for a 28-7 lead at the half.

It was more of the same in the third as Academy’s deficit increased to 56-13 and Bourgade tacked on a safety in the fourth for the final tally.

Charlie Anderson threw a touchdown pass to Hayven Potter and Isaac Carter rushed for a score to account for the Tigers’ points.

“We’re back home to start region play,” Morgando said. “Hopefully we can be competitive in the region, get some stuff going and execute a little bit better.”

At Paradise Honors, the Bulldogs rushed for 293 yards Friday night, but three turnovers proved costly in a 32-20 loss to the Panthers.

“Fumbles were the problem,” said Kingman head coach Russ Stryker. “Everything else was OK. We had some penalties, which hurt us. But the fumbles were what really killed us.”

At LWHS, the Lady Vols suffered their second loss of the season Thursday night in a 3-1 setback to Bradshaw Mountain.

The Lady Vols travel to Mingus at 6 p.m. Tuesday.