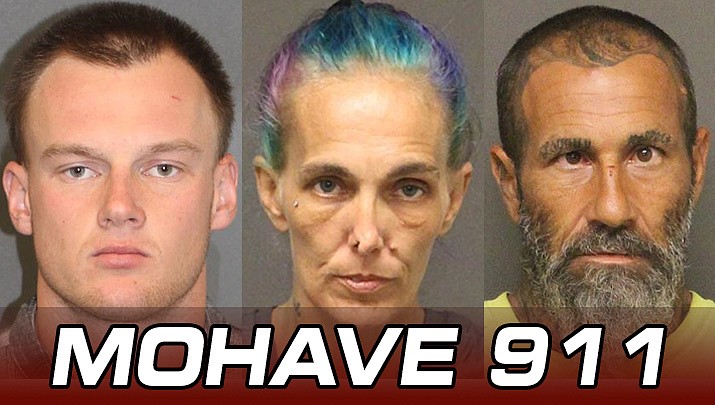 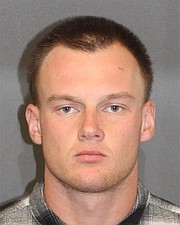 A call from a neighbor to law enforcement resulted in Kingman resident Justin Eugene Decker, 21, being arrested on suspicion of multiple felony charges including one pertaining to domestic violence.

At approximately 12:30 p.m. Thursday, Sept. 19 Mohave County Sheriff’s Office deputies responded to a report of a distubrance at a residence in the 3600 block of Butler Avenue. The reporting party said their neighbors were arguing and they could hear a male and female screaming inside the residence.

Deputies observed the male and female on the front porch and the parties were separated. Deputies observed swelling and bruising to the female’s jaw and when asked, the female advised she had been struck by Decker with a broken wooden chair a few days prior to the incident.

Decker was detained, and a pat search revealed a syringe and a baggie containing a white powdery substance in his pants pockets, deputies said.

Decker was arrested on felony charges of aggravated assault per domestic violence, dangerous drug possession, and drug paraphernalia possession, all felonies. He was booked into Mohave County Adult Detention Facility. 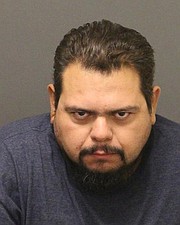 At about 4:22 p.m. Mohave County Sheriff’s Office deputies responded to a traffic accident at a residence in the 2000 block of Willow Drive, where a vehicle had swerved into a fence. Deputies arrived and were advised that the driver of the vehicle had walked away from the scene. He was located a short distance away.

Deputies approached the suspect and advised him to stop, and the male refused verbal commands, according to law enforcement. Deputies noticed the male appeared to be staggering as he walked and could smell a strong odor of alcohol.

The male subject, identified as Olagues, was detained, and witnesses on scene confirmed he was the driver at the time of the collision. The homeowner estimated the damage to the fence at $2,000. Olagues was transported to a nearby substation where a breath test was conducted, which reportedly resulted in a blood alcohol content reading of .186%.

Olagues was arrested on suspicion of felony criminal damage and four misdemeanor counts of driving under the influence. He was booked into the Mohave County Adult Detention Facility.

Detectives contacted a male subject who claimed to be the property owner of a residence in the 4300 block of Benton Street. The victim advised he had been away from the residence and noticed the water bill was unusually high.

Detectives responded to the residence Tuesday, Sept. 24 and made contact with a male and female subject, identified as Nelson and Snow. Nelson advised detectives he had been given permission from a family member to move into the residence. Snow allegedly admitted to moving into the residence, thinking it was abandoned, and had been living there for approximately five months.

Nelson and Snow were arrested and booked into Mohave County Adult Detention Facility.

Both also had assorted misdemeanor warrants for their arrests on other, unrelated charges. Officers responded to a residence in the 700 block of Ridgecrest Drive to assist Department of Child Safety investigators.

Investigators found that a 5-year-old girl had answered the door, with no evidence of a parent or guardian in the home. KPD officers entered the home and found Donna Gurney hiding in a back room, apparently due to having a warrant for her arrest.

At this time officers reportedly observed methamphetamine and assorted drug paraphernalia in the residence.

Gurney was arrested and the 5-year-old was taken into protective custody by DCS. Investigators obtained a search warrant and later found additional amounts of methamphetamine and the drug paraphernalia to indicate drug sales, reports law enforcement.

During the service of the search warrant Michael Gurney arrived and was taken into custody on several arrest warrants. An older child was also taken into protective custody by DCS upon returning from school. Both Gurneys admitted involvement in the offenses and were booked into the Mohave County Adult Detention Facility. The home has been condemned as uninhabitable by the Kingman Fire Department.

KPD investigated a burglary to a business in the 2600 block of Hualapai Mountain Road Tuesday morning. It was discovered that sometime during the previous night suspects had broken into a storage shed and removed over $8,000 in aluminum shelving.

Investigators were able to find Lewis at a recycling business on Andy Devine Avenue, where he was reportedly found to be in possession of some of the stolen shelving. Lewis was additionally charged with felony trafficking in stolen property.

Wright was located at a residence in the 3900 block of Ryan Avenue, along with the remainder of the stolen shelving, and arrested.

They were booked into the Mohave County Adult Detention Facility.