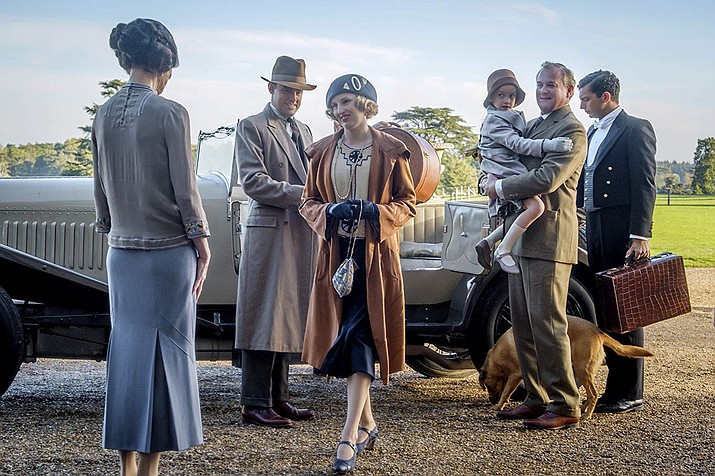 Fans of the historic Emmy-award winning series Downton Abbey will be thrilled to find that the cast has returned for a beautiful finale to the record-breaking drama. The film maintains the tone, grandeur, setting and plot attributions of the original series as creator Julian Fellowes takes the helm as the writer ensuring the nuance of each character and storyline is not lost in translation.

Dame Maggie Smith, who brings to life the delectably infamous Violet Crawley, Dowager Countess of Grantham, was one of the sole opponents to the series-turned-film. Blessedly, she chose to reprise her role and slay the silver screen with her quips, wit and treachery.

Fans will love the happy ending and upbeat tone. Be prepared to shed a few tears of joy. Fans can read interesting facts about the show including Queen Elizabeth’s penchant for finding mistakes here: http://mentalfloss.com/article/73164/15-proper-facts-about-downton-abbey.

4 out of 5 Royal Pages of the Backstairs.

The film begins in 1927 on the heels of a visit from King George V and Queen Mary. The staff are delighted that they will host a visit from the Royal Family and all are a twitter.

However, when the royal household staff arrive, they are a batch of arrogant people who displace the Downton staff from their usual positions and make it clear that their provincial and rudimentary skills are subpar. They are instructed to remain out of sight and under-skirt until the royal visit has ended. Naturally, the Downtown staff will not go down like dogs and connive a scheme to incapacitate the royal staff and regain their rightful place as heir, umm, Staff Apparent.

Can I watch this film without watching the series?

Yes and no. If one has not watched the series, the plot of the staff-on-staff intrigue is comedic.

However, there are background nuances that are mentioned that will be confusing. One could be inspired to watch the series after experiencing the film. Ultimately, it is a love letter for fans.

Of course, the wittier scenes are between the elder women: Violet Crawley, Lady Maud Bagshaw and Lady Isobel Merton as they scheme one against the other. A secret is revealed that bonds the women, which some fans anticipated.

Anna – the head housemaid – is at her best encouraging Lady of the Estate Mary Talbot to stay the course in maintaining the historic home and leading the charge against the insolent interlopers, including a Queen’s tailor with sticky fingers.

Mr. Carlson returns as butler and it is a welcome engagement.

Both Carlson and Barrows are given equal time to shine forth in leadership.

Fans of historic drama – who are not fans of the series – will find settings, costuming and tone of the film to be light and engaging. The material is not heavy or burdensome; a nice escape from heady topics.

Take note of the gowns and jewels as Maggie Smith is adorned with a platinum tiara that boasts 16.5 carats of diamonds: https://ew.com/movies/2019/09/13/downton-abbey-movie-costumes/

You have probably guessed that this genre won’t suit your palate. On the bright side, Professor Minerva McGonagall and Dolores Umbridge from the Harry Potter series appear in the film.

Curious readers can learn more about the actual location – Highclere Castle – that hosted the Downtown Abbey series for six seasons and was first constructed in 749 here: https://www.highclerecastle.co.uk/

More magic from 'Museum' series
Meghan’s choice: Will a royal tiara grace the big day?
‘Once Upon a Time in Hollywood’ serves up nostalgia
Windsor gears up for royal wedding, embraces Harry, Meghan
Entertainment: International Emmys to honor J.J. Abrams