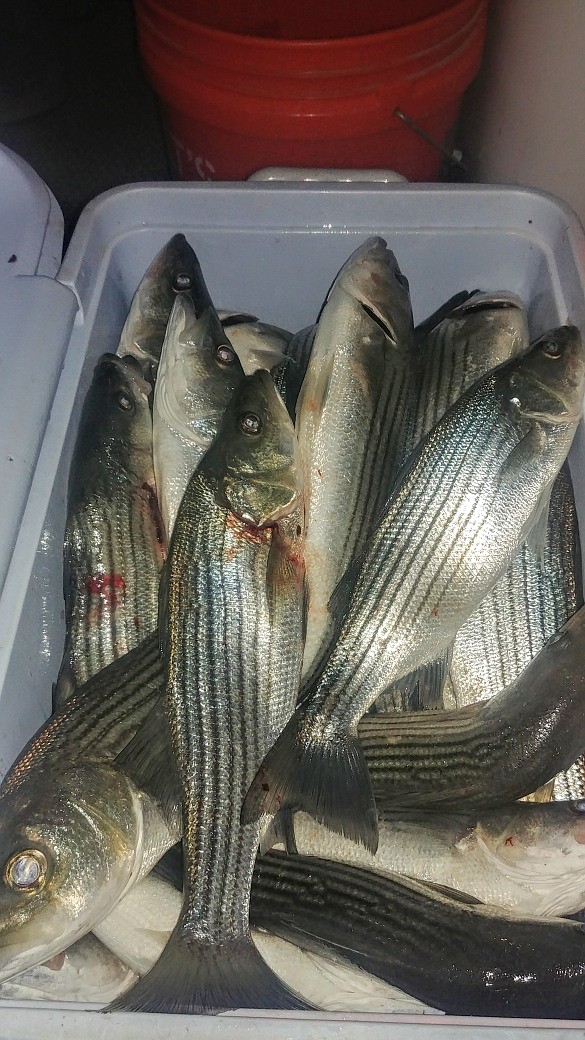 Don Martin and his clients filled the coolers with striped bass on a recent trip to Lake Mead. (Photo by Don Martin/For the Miner)

Normally this time of year my fishing season is over and I would be assisting on elk hunts. However, with the change in the policy by the Arizona Game and Fish Department, outfitters and guides can no longer purchase the names of those who were successful in the draw.

That means as an outfitter I have no way of contacting successful permit holders to offer my services.

So without hunters what was I to do? The answer of course was to go fishing.

I had been contacted by Kingman resident Frank Williams who told me that a friend of his was coming here to visit from Texas, and they were interested in going striper fishing at Lake Mead.

I hadn’t fished Lake Mead in September before so I wasn’t sure what was going to happen. Could we find fish?

We were truly going out without much knowledge and on a hunch where I thought we might find some hungry stripers. Past experience told me that the stripers were no longer in the coves, but were most likely to be out in the open water in search of their preferred food, threadfin shad.

I asked Frank if my friend Kingman resident Jay Chan, who is a master striper angler, could go on our trip. Frank said the more the merrier.

And so a fun fishing trip was planned.

Initially we were planning on going out on Monday, Sept. 23. But the weather forecast was for inclement conditions with a good possibility of rain for that night, so I suggested we go out a day earlier.

Turned out to be a good move.

The weather on Sunday evening was perfect. The light wind and cool temperatures would make the evening enjoyable, no matter what happened when we were fishing.

With the boat loaded with our bait and equipment, we headed out. We didn’t go far from South Cove, just off the end of a point that extends into the lake. My electronics indicated it was about 100 feet deep.

After I anchored, the HydroGlow submersible fishing lights were set out. All we could do now was wait.

Fish were there and biting We didn’t have to wait long. Within 10 minutes Frank put a nice striper into the boat. Then he caught another. Then his friend JD from Texas got a fish. Then Chan got a bite.

The other guys in the boat were getting bites and reeling in fish, while I just sat and watched not 10 feet away without getting a bite. This is a phenomenon I don’t understand – how one person cannot get a bite, while the rest of the anglers in the boat are hammering them.

One thing we noticed was there were a good number of threadfin shad circling the boat under the lights, which is a good sign. Threadfin shad are the number one food source for all the sport fish in Lake Mead, and usually if you’ve got shad around your boat, you’ll have stripers under them.

As it turned out, it was almost a wide-open bite! Jay was using two rods and put on a clinic. He started catching one fish after the other.

Williams and JD were also catching fish, and then, finally, I got in the game.

At 4 a.m. we had to stop fishing. There was no more space in the ice chests to put the fish!

Jay broke the record for one night, besting the previous mark set by Yuma resident Jon Vance, who had caught 73 fish. It was also the second best night of fishing this summer. Only the Wong family out of California caught more fish in one trip.

When we cleaned the fish, we found that we did not have even one striper that was 20 inches long. All of them were 12-15 inches in length. Remember, there is no limit on stripers under 20 inches long on Lake Mead and both the Arizona Game and Fish Department and the Nevada Department of Wildlife encourages anglers to catch and keep all the stripers they can utilize.

At the end of the day, we ended up with over 50 pounds of great eating striper filets.

I have heard that in the fall when the water and days get cooler, fish on Lake Mead will go on a feeding frenzy in preparation of winter.

I’m not sure if that was the case on this night, but one thing was certain. The stripers are biting at night in Lake Mead right now.

Column | Angling trip with friends produces lots of fish
Column | Dark of the moon provides some record-setting angling on Lake Mead
It's only a net - how hard can it be? (Hint: Kinda hard)
Weekend Trips of a lifetime on Lake Mead
First striper trip of the year on the ‘new’ Lake Mead