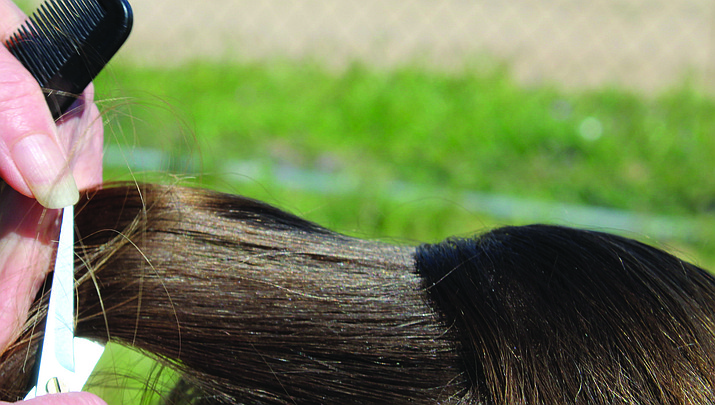 Arizona residents might be forced to cut their own hair for a while, after Gov. Doug Ducey ordered all barber shops, beauty salons, nail salons and spas to close. (Photo by Casey Jones/Kingman Miner)

GLENDALE -- After mounting criticism, Arizona Gov. Doug Ducey on Friday ordered hair and nail salons, barbers and other businesses that provide personal services to close to slow the spread of the new coronavirus.

The new order from the governor takes effect at 5 p.m. Saturday and comes after he refused for weeks to clarify that shops where clients and staff must be close together needed to shut down to protect public health. Also on the new closure list are massage parlors, tattoo parlors, barber shops and tanning salons.

The Republican governor had repeatedly said during a town hall broadcast on more than 80 radio and TV stations Thursday night that salons and barbershops were not included in his list of “essential services” that can remain open under an executive order he issued March 23 to slow the spread of the new coronavirus.

But the governor's own March 23 news release outlining those essential services listed hair salons as among those that could remain open. The actual order didn't specifically name those businesses, but it barred cities from acting on their own to close them down.

“If they’re looking for cover under one of our categories, they’re going to have to be able to demonstrate that they can exercise social distancing or some other type of protective measure,” Ducey said Thursday,

When questioned at the town hall about why salons were being allowed to remain open even though there’s virtually no way clients or staff can maintain a safe distance to avoid spreading the virus, Ducey did not answer directly and instead pointed to his closure of bars and restaurants and a ban on gatherings of more than 10 people.

“Like I said, we focused on shutting down as much as we could of these issues to slow that spread,” Ducey said.

“If we need to update the guidance we will do that, and we will continue to do that,” he said.

Friday's move came amid heightened pressure on the governor, including a tweet from Democratic U.S. Rep. Greg Stanton's chief of staff, Seth Scott, who said he was told by the governor's office Friday that small businesses should hire a lawyer if they didn't understand if they were affected.

Ducey's list of “essential services” is very broad and has drawn criticism from many mayors. Flagstaff Mayor Coral Evans last week ordered salons closed in her city, risking pushback from the governor that never came.

In other developments Friday, the Coconino National Forest closed popular hiking trails and day-sites among the scenic red rocks of Sedona because of a large numbers of hikers and a failure to practice social distancing.

The closures were made in coordination with Sedona and Verde Valley officials concerned about the possible effect on local health and emergency services, the forest said. Red Rock District Ranger Amy Tinderholt said “the unfortunate reality at these locations during this pandemic has been continued high use, causing crowds to form and people lining up just to hike or get to the end of the trail."

People wanting to visit Sedona “should stay home and reschedule for another time," Sedona Mayor Sandy Moriarty said Tuesday in a statement. “We cannot afford to risk the capacity of our local hospitals or the lives of our healthcare workers and vulnerable citizens because people want to take a vacation.".

The forest said it will issue citations to anyone who ignores the closures.

Meanwhile, the Phoenix City Council on Thursday voted down a measure that would have closed trails in the city's parks.

The Arizona Department of Health Services reported another nine virus-related deaths Friday, bringing the total to 41. The number of cases statewide is now 1,769.

On the Navajo Nation, tribal President Jonathan Nez said anyone found violating a reservation-wide nighttime curfew will be cited and fined starting Saturday. That includes both tribal members and non-members.

For most people, coronavirus causes mild or moderate symptoms, such as fever and cough that clear up in two to three weeks. For some, especially older adults and people with existing health problems, it can cause more severe illness, including pneumonia and death.