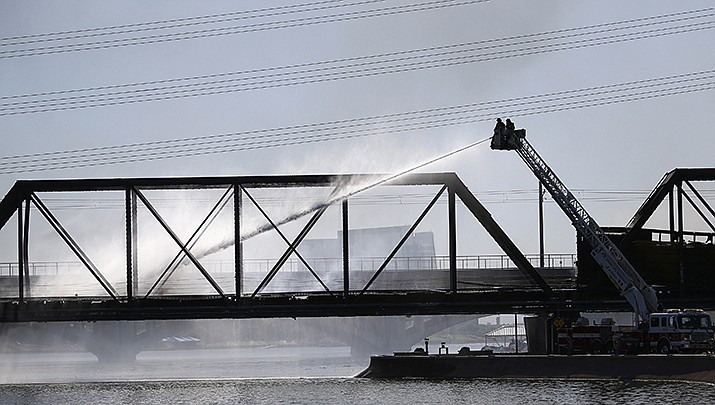 The Tempe Fire Department said Friday that two contract workers were hurt when a chemical they were transporting from a freight train car that derailed earlier this week leaked from a hose. Firefighters are shown above fighting the fire that broke out on a bridge after the derailment over Tempe Town Lake on Wednesday, July 29. (Associated Press file photo)

TEMPE - The Tempe Fire Department said Friday that two contract workers were hurt when a chemical they were transporting from a freight train car that derailed earlier this week leaked from a hose.

The tank car was carrying cyclohexanone, a pale and oily liquid that is toxic and flammable. As a worker was disconnecting a hose from the car, he heard a loud bang and liquid from the hose sprayed his face. Another worker was sprayed in the chest area.

The worker who was sprayed in the face was conscious and sent to a burn unit, and his condition is serious but not life-threatening. The other worker was treated on site and declined hospitalization.

A 102-car Union Pacific Railroad freight train traveling from Tucson to Phoenix derailed Wednesday morning as it traveled on a century-old bridge that spans the man-made Tempe Town Lake. The bridge caught fire and partially collapsed.

Andrea Glass of the Tempe Fire Department said fewer than 10 gallons were dispersed from the hose to the ground. She said the incident will slow down the cleaning up process. She said roughly 100 workers, mostly contractors, are trying to clean up the mess.

FLAGSTAFF Authorities are investigating the death of a northern Arizona inmate who refused medical attention and reportedly had a strange cut on his finger. The Coconino County Sheriff’s Office said Friday it is looking into the death of the inmate from the Coconino County Detention Facility. Officials said he died at Flagstaff Medical Center.

According to investigators, the arrestee refused to answer any medical-related questions during his booking on Wednesday. Officers reported seeing a laceration on the arrestee’s finger that “appeared red, swollen, and hot to the touch.”

Officials said the inmate was on transported from Page to the Flagstaff Facility. During his move, officers said the inmate had a medical episode and later died Friday. His cause of death remains unknown. His name has not been released.

FLAGSTAFF - A former Flagstaff mayoral candidate accused of forging petition signatures to appear on Tuesday’s primary ballot has been indicted on fraud and other charges.

The indictment filed Thursday alleged Victor John Varela signed the names of six other people on his nominating petitions and turned in such documents knowing they contained false or forged information.

In a July 9 post on social media, Varela said he was sorry and dropping out of the race. “It was never my intention to commit fraud or to cheat my way in,” Varela wrote. “I am not going to try to justify my behavior.”

His name will still appear on the ballot, because ballots had already been printed. But officials say any votes cast for Varela won’t be counted.

TUCSON - A vintage clothing retailer based in Tucson has cut ties with three of its Colorado stores after dozens of anonymous allegations of employee abuse surfaced on social media this week.

Buffalo Exchange has stores in 19 states, with three locations in Denver and Boulder.

“As of today, our relationship with the Buffalo Exchange Colorado franchise stores is terminated,” Corporate Vice President Rebecca Block said in an open letter Thursday.

The Denver Police Department with help from the FBI are investigating the allegations against Colorado franchise managing partner Patrick Todd Colletti of sexual assault, underage drug and alcohol abuse, fraud and theft, The Denver Post reported. The newspaper said nine people shared stories that closely matched and overlapped with those shared on Instagram. Jessica Straughter, who worked as a buyer at the Denver location, told The Denver Post that the stories were true and that she was fired for not enabling Colletti’s behavior.

The Denver location was closed but posted a sign saying that Colletti was “released from responsibilities and associations from The Buffalo Exchange of Colorado,” according to the stores’ Facebook page.

The Denver and Boulder police departments said no police reports have been filed related to the allegations. However, Denver Police did open an investigation into the allegations made on Instagram. The department encouraged potential victims to contact detectives.

A person using Colletti’s full name and personal phone number emailed The Denver Post this week, but did not respond to further requests for comment.

“Take it easy on my scared employees and I will give you a story worth printing,” Colletti said. “Twenty-five years of used pants. Not quite front page but a lifetime of love and community and inclusion. It can’t be lost in a moment of anger.”