At Kingman Academy of Learning, a graduation and a reunion rolled into one 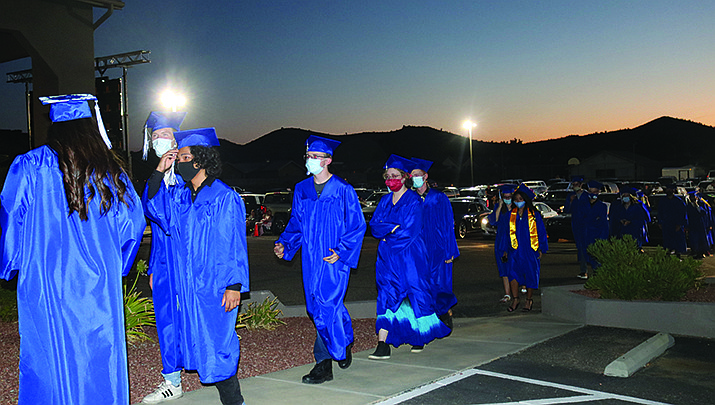 Seniors from Kingman Academy of Learning High School finally walked across the stage on Saturday, Aug. 1, as graduation ceremonies were held after a nearly three-month delay due to the coronavirus pandemic. Friends and family watched on a large video screen from the parking lot at Hope City Church on Gates Avenue. (Photo by Travis Rains/Kingman Miner)

KINGMAN – Kingman Academy of Learning High School seniors had the opportunity to walk across the stage, albeit on screen, amidst cheers from loved ones at a graduation ceremony Saturday, Aug. 1.

The graduation was held primarily in the parking lot of Hope City Church, 1850 Gates Ave.

Almost every parking space at the church was filled with family members who had been waiting patiently for months to see the graduates put on their gowns and turn their tassels.

While the graduates themselves were excited as well on Saturday, the delayed graduation and associated COVID-19 pandemic left some feeling grateful that all the confusion had come to an end. Graduation had originally been scheduled for May 20.

Anthony Kuc, 18-year-old salutatorian, said he was glad for the opportunity to walk and see his friends.

“If we did like a virtual thing I probably wouldn’t have even done it,” he said. “It’s nice, but it’s kind of almost lost its value because it’s so late. But at least I’m here seeing everybody again, because I know everybody is coming in from out of town. I actually came here from Flagstaff.”

Hayden Rimel, 18, said he was feeling “pretty good and kind of excited,” prior to the ceremony, even with the graduation taking place months after originally scheduled.

Ghia Quino, 19, wore a gold sash on Saturday signifying that she is a member of the National Honor Society.

“It’s a group of high schoolers who have completed their community service requirements and who maintained a 3.5 GPA or higher,” she said, explaining that being a part of the NHS looks good on applications to colleges.

Cash Roche, 18, said he was excited for the confusion to be over.

“Our senior year got ruined pretty much, I do baseball, so we didn’t get to finish our season which really sucked; we had a good team. It’s nice for it to be over, I don’t feel like I’ve been in high school for the last six months.”

Roche said he’s spent the down time working and hanging out at home.

Toward the end of the night, after speeches from valedictorians and school staff, the graduates entered Hope City Church in single file and wearing masks to make their trips across the stage.