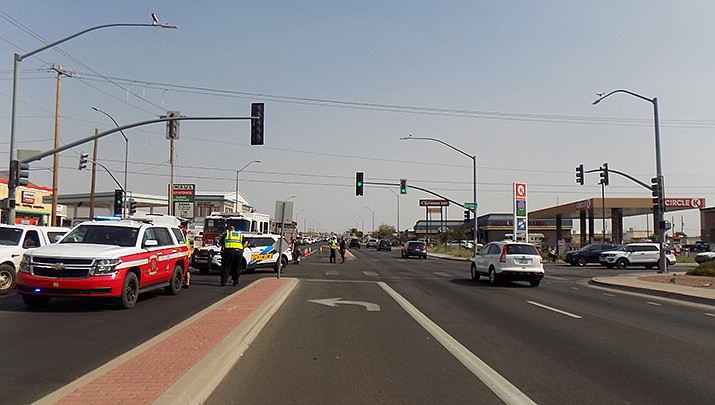 Police officers stop traffic after a pedestrian was struck by a truck on Stockton Hill road at Gordon Drive on Monday, Aug. 3. (KPD photo)

KINGMAN – The Kingman Police Department is investigating a vehicle versus pedestrian crash that occurred in the 4000 block of Stockton Hill Road on Monday, Aug. 3, and that resulted in critical but non-life-threatening injuries for one of the parties involved.

The truck, which reportedly ran over and stopped on the pedestrian, was turning left onto southbound Stockton Hill Road when it struck the pedestrian.

Two witnesses lifted the truck enough to be able to free the pinned pedestrian, who was transported to Kingman Regional Medical Center with critical but non-life-threatening injuries.

The crash remains under investigation, and there are conflicting witness statements regarding right-of-way and obstruction of view. Impairment is not suspected to be involved.