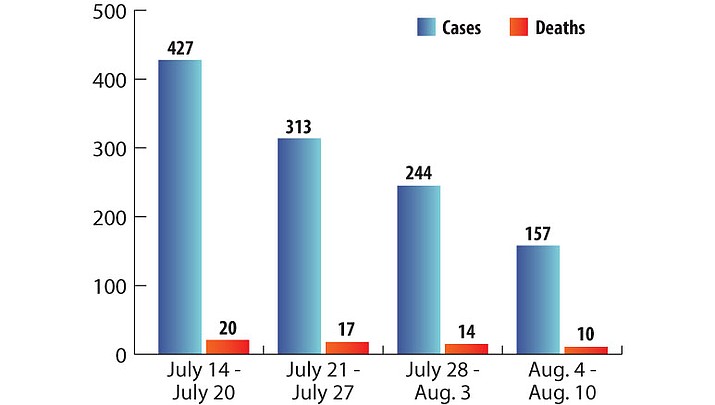 This chart shows the decline in new COVID-19 cases and deaths in the county in recent weeks. (Chart by Brandy Mayo/Kingman Miner) 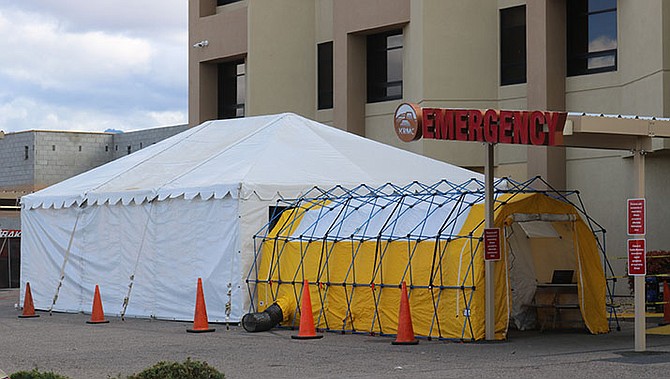 The number of new COVID-19 cases and deaths in Mohave County has been falling for several weeks. The entrance to the emergency room at Kingman Regional Medical Center is shown in this Miner file photo.

KINGMAN – After a deadly July, the number of new COVID-19 cases and deaths in Mohave County is falling.

Mohave County Public Health Director Denise Burley updated the county board of supervisors on the positive trend at their meeting on Monday, Aug. 10.

“This has been our second big week of decreases,” the health director said, noting a “big, big improvement.”

Burley thanked county residents for their help in reducing the spread by taking preventive measures like wearing face masks and social distancing. She also thanked health care workers at senior centers and nursing homes for preventing outbreaks, and said she hopes the trend will continue.

The decline in cases comes after a tragic July, when more than half of the county’s cases (1,822) and nearly half of the deaths (74) were logged last month.

Ditto for the entire state. “We are seeing a decrease throughout Arizona,” Burley said, adding the county’s downward curve mimics the state’s.

But the pandemic isn’t over.

County health officials reported 17 new cases on Sunday, Aug. 9 and 18 on Monday, Aug. 10, along with two deaths. The deceased are a Lake Havasu City medical service area resident in the 50-59 age bracket, and an adult age 70-79 from the Bullhead City service area.

Only three of the new cases are in the sprawling Kingman service area, but all are in vulnerable age brackets, with one each in the 70-79, 80-89 and 90-plus groupings.

There were also 19 new cases in the Bullhead City area and 13 in the Lake Havasu City area reported on Sunday and Monday.

As of Monday, Aug. 10 3,215 county residents have contracted the virus, and 160 have died, according to the county.

The Bullhead City service area, which includes Fort Mohave, has suffered the most, with 1,493 positive cases and 70 deaths. Lake Havasu City has had 1,012 cases and 35 deaths.

Kingman has experienced a comparably small number of cases with 627, but a disproportionate share of the county’s deaths with 55. There have been 70 cases, but no deaths, in the Arizona Strip.

Due to different manners of reporting and compiling data, state and county statistics vary, with Mohave County showing 11 fewer cases and 11 fewer deaths than the state was reporting on Tuesday, Aug. 11.

According to county health officials, 1,841 county residents have recovered from the virus as of Monday, Aug. 10. The average age of death of COVID-19 victims in the county is 77 years, while the age of the average patient is 48 years. About 55% of the patients have been female.

The positivity rate for tests conducted on county residents remained high on Monday, Aug. 10. According to daily test data released by the Arizona Department of Health Services, there were 24 new cases of the virus from just 37 tests for a positivity rate of 65%.

According to AZDHS, 18,760 tests have been conducted on county residents since the start of the pandemic.

Of the 15,090 tests conducted for the actual virus, 12.1% of the individuals have tested positive. Of the 3,670 serology tests, which determine only if the individual had the virus in the past, 5.7% have been positive.

Nationwide, Reuters was reporting more than 5.1 million confirmed cases and 163,179 deaths on Monday, Aug. 10. The U.S. leads the world in COVID-19 cases and deaths.