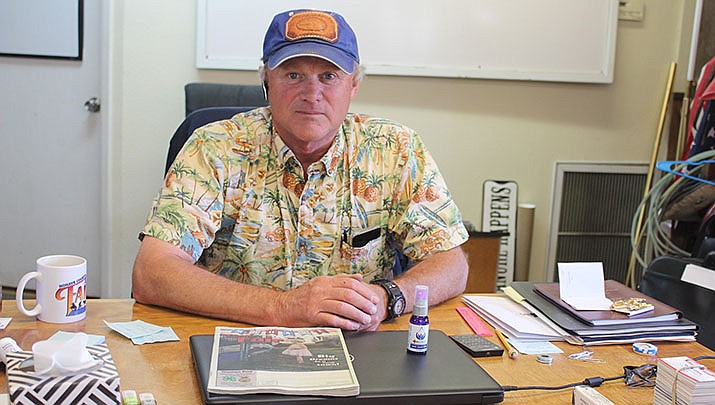 The 2020 Mohave County Fair has been canceled due to coronavirus concerns. Fairgrounds Manager Tim Woods is shown. (Photo by Agata Popeda/Kingman Miner)

The decision was made, he said, because social distancing necessary to prevent the spread of the coronavirus would be impossible. The fair had been scheduled for Thursday through Sunday, Sept. 17-20.

“It’s almost impossible to have a fair with the amount of people coming,” Woods said. “We would have to separate the lines that would have to be uninterrupted. And the carnival rides? I don’t see how they could operate.”

Woods estimates the loss in sales tax from not holding the fair would be $500,000 to $750,000 for the City of Kingman and Mohave County combined. He said the lack of proceeds from the fair would also leave a big hole in the fairgrounds’ budget.

“We are working real hard to be solvent. Our last big event was the midget wrestling in February,” Woods said. “And that was a great success. But it will not pay the bill for the whole year.”

Last year, the fair attracted 43,000 people, including many who made purchases, so the loss in sales tax will be significant, according to Woods.

“There was but one county fair in Arizona this year,” he said. And that one took place before COVID-19 hit.

“It’s a very tough year but we are not the only one,” Woods said. “It’s the entire country.”

Joshua Noble, deputy director of economic development and tourism for the City of Kingman, called the cancellation “another blow in a tough year.”

“Canceling of the county fair is a responsible action, though we’ll undoubtedly see an impact,” Noble said. “Hotels will lose out on vendors who come to vend at the fair; we’ll be able to track some of that effect. What’s harder to measure is the impact on restaurants.”

At least part of the fair will be salvaged. Woods said the 4-H/FFA (Future Farmers of America) livestock auction will be held virtually.

Since showmanship is a big part of the 4-H/FFA competition and multiple judges are required to evaluate how competitors handle their animals, Woods said the fairgrounds will hold several small livestock shows with a maximum of six people in the arena. They won’t be open to the general public.

Woods said the children who raise animals for auction should still do well at a virtual auction.

Several other events remain on the schedule for the fairgrounds this year. The Renaissance Faire and Feast is still on the calendar for October, as well as the annual Kingman Cancer Care Unit Arts and Crafts Fair in November. The fairgrounds is still hosting small parties and weddings with under 50 persons.