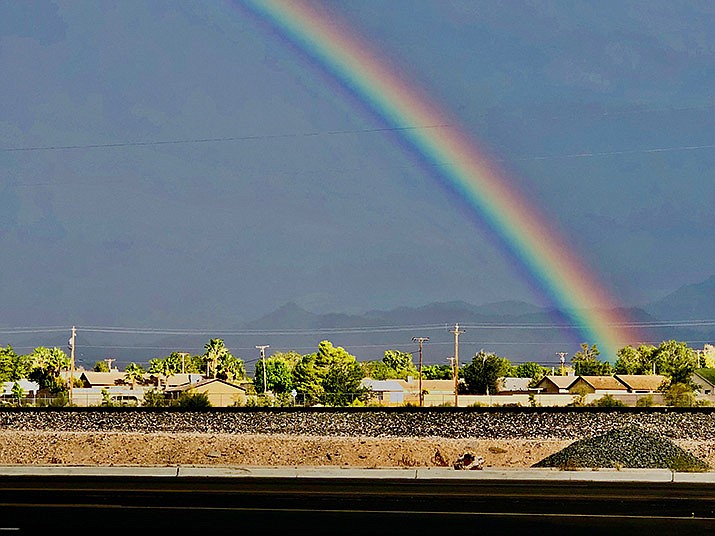 Kingman got a taste of rain on Sunday, Aug. 16 when the National Weather Service recorded .03 inches falling at Kingman Airport. There is a chance of rain daily through Wednesday, Aug. 19. A rainbow is shown over Kingman in this file photo. (Miner file photo)

KINGMAN – Monday, Aug. 17 will start off mostly sunny with a high near 108 degrees, and while the heat will persist for most of the week, clear skies could diminish as a slight chance of thunderstorms exists through the evening of Wednesday, Aug. 19.

The Kingman area, based on National Weather Service measurements from the Kingman Airport, has received 0.03 inches of rain in the past 72 hours, all of which fell Sunday, Aug. 16. There could be more rain in store.

A 20% chance of showers and thunderstorms starts after 3 p.m. Monday, according to the forecast from the National Weather Service. A 10% chance of thunderstorms and showers remains prior to 7 p.m., after which time the evening is expected to be mostly clear with a low of around 80 degrees.

Tuesday, Aug. 18 has a forecast high near 107 degrees along with a 20% chance of showers and thunderstorms after 11 a.m. That 20% chance remains until 11 p.m. Tuesday, which has a forecast low of approximately 79.

Wednesday will also see a 20% chance of showers and storms after 11 a.m., along with a high of around 106 degrees. Wednesday night, with a forecast low of around 79 degrees, also has a 20% of showers and thunderstorms prior to 11 p.m.

The chance for storms is not the only weather-related development of which Kingman area residents need to be mindful. NWS has also issued an excessive heat warning until 10 p.m. Wednesday, Aug. 19.

The National Weather Service recommends that people take extra precautions during times of excessive heat. If possible, strenuous activities should be completed during the early morning or evening. Lightweight and loose-fitting clothing should be worn, and those spending any time outside should drink plenty of water. Young children and pets should not be left unattended in vehicles.

As of 9 a.m. Monday, NWS had not forecast potential showers or thunderstorms on Thursday, Friday or Saturday, Aug. 20-22. Thursday will have a high near 105 degrees, and while a high of 103 degrees is forecast for Friday and Saturday.

However, a slight chance of showers and thunderstorms returns come Sunday, Aug. 23, which will be mostly sunny with a high near 104.