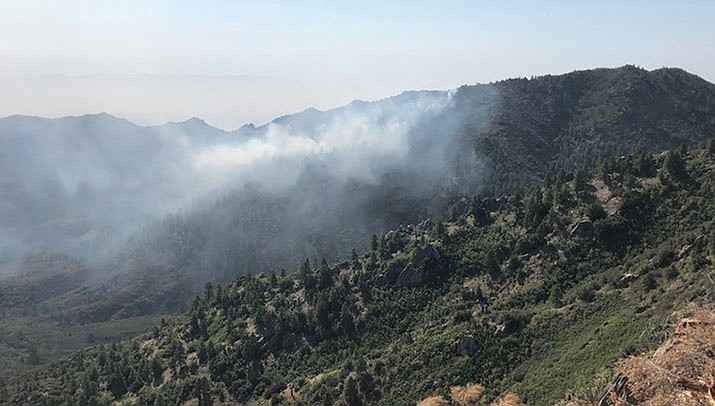 The Ridge Fire in the Hualapai Mountains, which began Sunday, Aug. 16, had burned 85 acres as of the morning of Tuesday, Aug. 18. (Photo courtesy of BLM)

KINGMAN – Bureau of Land Management firefighters continue to battle the Ridge Fire in the Hualapai Mountains.

The fire started at about 6:15 p.m. Sunday, Aug. 16 due to a lightning strike, and has so far burned 85 acres. About 100 firefighters are battling the blaze.

The fire, about five miles south of Pine Lake, is not threatening any homes or structures, according to InciWeb, the federal fire information system. However, Ridge Road has been closed. The wildfire is also impacting access to the Wabayuma Wilderness Trailhead, and portions of the Arizona Peace Trail and Moss Rock OHV Trail.

The fire is burning in grass and chaparral, fire officials reported.

“During the heat of the day short uphill runs with occasional torching has been observed,” InciWeb notes of the fire’s behavior. “As the sun sets and humidity increases fire behavior decreases to backing downhill, creeping and smoldering through grass, leaf litter and pine needles on the ground.”

Also noted is the potential for increased activity in the event there is minimal precipitation in the coming days. Additional weather concerns include “strong, erratic and gusty outflow winds associated with area thunderstorms.”

Fire personnel have planned full suppression actions such as scouting the area for natural features that can be used as breaks to stop or slow the fire’s spread, and utilizing aircraft to support firefighting efforts on the ground.