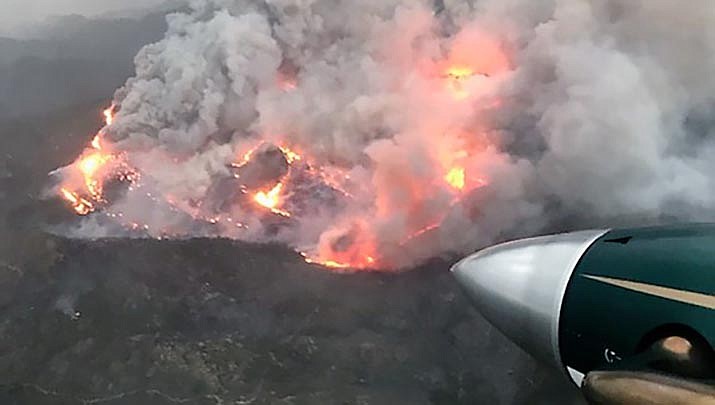 The Ridge Fire is shown burning in the Hualapai Mountains. The fire had burned 986 acres by noon on Wednesday, Aug. 19. (BLM photo/Public domain)

KINGMAN – The Ridge Fire in the Hualapai Mountains, caused by a lightning strike on Sunday, Aug. 16, has now grown to 500 acres and wasn’t slowed by stormy weather in the area on Tuesday, Aug. 18. An extra 20 fire personnel have been brought in to battle the blaze, increasing the contingent to 120.

The thunderstorms, rain and hail experienced in the Kingman area the evening of Tuesday, Aug. 18 provided no relief, according to the federal Bureau of Land Management, which wrote on its Facebook page that “little to no rain was received over the fire area.”

Winds, however, did impact the blaze.

“Thunderstorms in the fire area produced winds upwards of 50 mph pushing fire in all directions and increasing fire activity,” the agency wrote, adding that there remains no threat to homes or structures. The fire had burned just 85 acres as of the morning of Monday, Aug. 17, but grew substantially.

The Pine Lake Fire District wrote on its Facebook page that the increase in fire activity has the area looking at a “very serious fire event.”

“At this time do not be alarmed but be prepared: Have your bags packed and ready to go should an evacuation be necessary,” the fire district wrote. “If an evacuation is called for listen for the siren and follow instructions to evacuate.”

The fire is being combatted by 120 personnel, and fueled by grass, chaparral, pinon-juniper and scrub oak ponderosa pine. Due to storm activity, the fire is mostly moving north and west, according to InciWeb, the federal fire information system.

“During the heat of the day short uphill runs with occasional torching has been observed,” InciWeb notes of the fire’s behavior. “As the sun sets and humidity increases fire behavior decreases to backing downhill, creeping and smoldering through grass, leaf litter and pine needles on the ground.”

“Firefighters will continue to work supported by aircraft as needed to attain containment,” the release continued. “They will be using roads, trails and natural features such as rock outcroppings and other areas with light vegetation as containment features in this steep, rough and rugged terrain.”