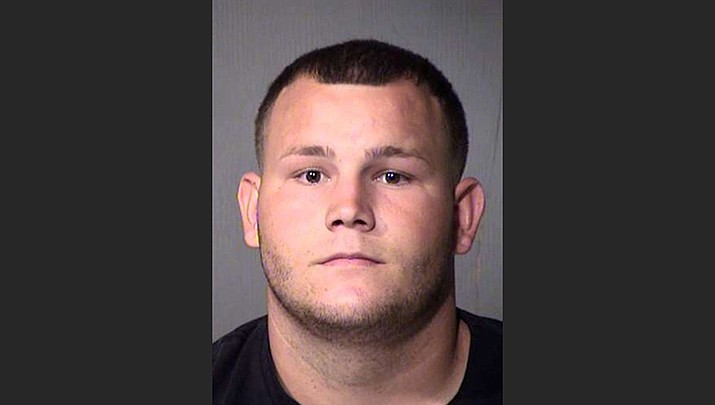 This undated file photo provided by the Maricopa County Sheriff’s Office shows Leslie Merritt Jr., who was once charged in some of metro Phoenix’s freeway shootings during the summer of 2015. The case against Merritt, who spent months in jail, was dismissed in 2016 at the request of prosecutors. On Aug. 11, 2020, a judge issued a court order declaring that Merritt had been officially cleared of the allegations. (Maricopa County Sheriff’s Office photo)

PHOENIX - An Arizona judge has declared that a landscaper once charged in metro Phoenix’s 2015 freeway shootings has been officially cleared of the allegations.

“This just proves all along what we have been saying: that my son didn’t do it,” said his father, Leslie Merritt Sr.

All records in the case were ordered sealed from the public in last week's rare legal development.

The Arizona Department of Public Safety, which investigated the case against Leslie Merritt Jr., declined to comment on the clearance order.

Rick Romley, a former top county prosecutor in metro Phoenix for nearly 17 years who wasn’t involved in Merritt’s case, said he can’t remember any lawyers making a clearance request in the past, much less a judge granting one.

“If the judge made a finding like this, you have to ask if there was some bad faith by law enforcement,” Romley said. “It’s such an extraordinary ruling (that) you have to ask yourself that question.”

The freeway shootings sparked so much fear that people avoided driving the freeways, school buses took different routes and signs were posted telling people to be careful. Police heightened patrols and surveillance in pursuit of a suspect.

A total of 11 shootings occurred on Phoenix-area freeways in late August and early September 2015. No one was seriously injured when eight cars were hit with bullets and three others were struck with projectiles such as BBs or pellets. The only injury occurred when a 13-year-old girl was cut by glass.

Minutes after Merritt was arrested, Gov. Doug Ducey had triumphantly tweeted, “We got him!”

Investigators said Merritt’s handgun was linked to four of the shootings. But an outside forensic firearms examiner said bullets from the four shootings couldn’t be “excluded or identified” as having come from Merritt’s gun.

The judge presiding over a false-arrest lawsuit filed by Merritt has said the firearms examiner and two other ballistics experts found insufficient evidence to link Merritt’s gun to the four shootings. No one else has been arrested in the shootings.

In his lawsuit, Merritt says authorities pursued charges even though they knew his handgun was at a pawn shop during the last of the four shootings with which he was charged. He also accused the Department of Public Safety of changing the timeline of the shooting to fit a theory that a bullet from Merritt’s gun got lodged in the sidewall of a tire.

The agency has denied both allegations.

Most of Merritt’s legal claims against Arizona Department of Public Safety officers were dismissed in late 2019. But he can still seek damages on his claims of false arrest and false imprisonment for the six-day span between his arrest and indictment.

Jason Lamm, one of Merritt’s attorneys, said the ruling affirms his client’s innocence, but noted that it’s largely symbolic and doesn’t restore his reputation. “You can’t erase the internet and you can’t erase history,” Lamm said.