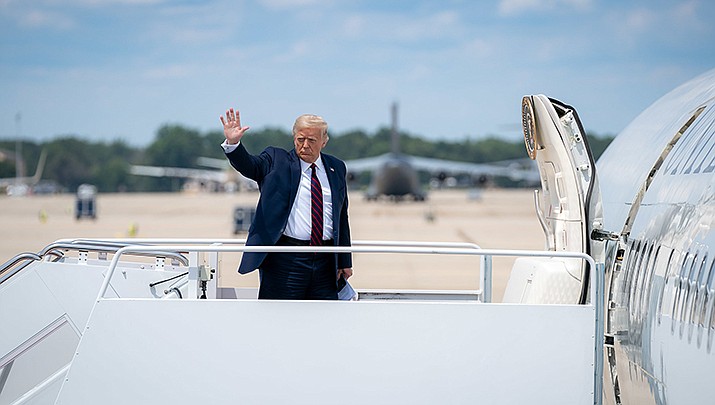 OLD FORGE, Pa. – Determined to keep Pennsylvania in his column, President Donald Trump took the fight to Joe Biden's old backyard Thursday and insisted his Democratic rival would be the state's “worst nightmare” if elected president.

In a particularly in-your-face bit of campaign trolling, Trump staged a small rally just outside the former vice president’s birthplace in Scranton mere hours before Biden was to formally accept the Democratic presidential nomination.

The campaign framed Trump's speech as a review of “a half-century of Joe Biden failing America,” and the location pointed to the importance of Pennsylvania as a battleground state.

“Joe Biden is no friend of Pennsylvania – he is your worst nightmare," Trump declared.

Trump sought to diminish Biden’s ties to Scranton. The former vice president often spotlights his early years in the northeast Pennsylvania city as evidence of his middle-class upbringing.

Biden was born in Scranton but his family moved to Delaware when he 10. His father, Joe Sr., was once a sales manager at a car dealership in Scranton, but quit when he thought the owner was trying to humiliate employees during a Christmas party. The family eventually moved to Delaware, where Joe Sr. found work.

“He’ll remind us that he was born in Scranton, but you know he left like 70 years ago, right?” Trump said.

Biden’s speech will come hours later from his Delaware hometown and, as the culmination of the four-day convention, will surely dominate headlines and cable news chyrons. But Trump has offered a robust slate of competing activity, holding multiple in-person events this week meant to draw a contrast with the largely virtual campaign Biden has conducted during the coronavirus pandemic.

Trump visited two other battlegrounds – Wisconsin and Arizona – as well as Minnesota, one of the few blue states from 2016 that Trump’s team feels like he may have a chance to flip this fall. But his campaign has been warily watching his standing falter in the trio of Rust Belt states that carried him to the presidency in 2016. Trump is planning more convention counterprogramming Thursday evening with an appearance on Sean Hannity’s Fox News Channel show just before Biden is to deliver his acceptance speech.

The so-called Blue Wall of Pennsylvania, Michigan and Wisconsin, meant to provide Electoral College insurance for Hillary Clinton, instead all broke for Trump by slim margins in 2016. He captured Pennsylvania by a mere 44,000 votes four years ago and has since clashed with the state’s Democratic governor over efforts to reopen its economy.

Many in the Trump campaign have all but written off Michigan, a state battered by the virus, and whose governor has repeatedly fought with the president. But advisers believe Pennsylvania, like Wisconsin, remains in play and could be captured again if the economy continues to rebound.

Trump returned to northeastern Pennsylvania, where he did unexpectedly well in 2016, winning Luzerne County and nearly winning in Lackawanna County, both of which have a solid registration advantage for Democrats. They bear the hallmarks of Trump country: They are whiter, with lower median incomes and fewer people with college degrees, than the rest of Pennsylvania.

The number of GOP registrations in Pennsylvania has outpaced Democrats this cycle and many political observers believe the state, which has many white, older voters, could become stronger for Republicans. But Trump has stubbornly trailed Biden, whose team aims to return Pennsylvania to the blue column, where it had been from 1992 until 2016.

To that end, Trump is seeking to portray Biden as out of touch with more moderate and conservative parts of the state, making the argument that Biden is a “puppet of the radical left.”

Trump said he's best suited to return the country back to its pre-pandemic status, when unemployment stood at the lowest rates since the early 1960s and the economy was experiencing moderate growth. He said a Biden win in November would usher in economic pain for Americans and more chaos in U.S. cities that have endured sometimes violent protests in recent months over police brutality and racial injustice.

“If you want a vision of your life under a Joe Biden presidency, imagine the smoldering ruins of Minneapolis, the violent anarchy of Portland and the bloodstained sidewalks of Chicago coming to every city and town in America,” Trump said.

“Shut down Wolf,” Trump complained. “You can’t do this. He’s gonna destroy your soul.”

The outdoor rally drew a few hundred supporters. Many, but not all, wore masks and seats were lined up closer than 6 feet apart, the space recommended by public health experts to reduce the chance of transmission of the coronavirus.

The former vice president is particularly suited in the Democratic field to carry Pennsylvania, with his deep ties to Scranton and messages catering to white working-class voters and Black voters in Philadelphia and Pittsburgh. Scranton is in Lackawanna County, which went for Clinton in 2016, and Biden's team hopes to increase turnout there.

“This sideshow is a pathetic attempt to distract from the fact that Trump’s presidency stands for nothing but crises, lies and division,” said Biden spokesman Andrew Bates.