Survivors’ stories: These Mohave County residents had the virus and shared their stories

The coronavirus has infected 3,479 Mohave County residents, and one out of 20 has died. This week the Miner will tell the stories of three of the survivors – a homebody, a beer lover who sings for a living and a skeptical Mohave County supervisor. 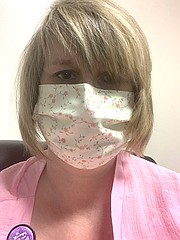 She doesn’t know where she got infected. It could have been work, or maybe a grocery store.

“I don’t think we will ever know,” Anderson said. But she certainly got sick somewhere.

It was a normal Sunday, May 31. Anderson took a nap in the afternoon and was getting ready to work the next day, pursuing her nightly routine.

Around 7 p.m. she got a headache and felt dizzy. She checked her blood pressure, found it to be unusually high, and after consulting two friends who are registered nurses, she rushed to the emergency room.

COVID-19 was definitely not on Anderson’s mind when she got to the hospital with a fever and a headache. When they told her she would be tested for the coronavirus, she thought it was a waste of time. She was sitting there thinking how to get an Uber to get home and get ready for work tomorrow.

“I knew it would be negative,” she said.

“I was absolutely shocked,” Anderson said.

After a chest X-ray, she was admitted to the hospital to make sure she was not developing a pneumonia. She was sent home the following day.

“The first week was pretty tough,” she said. “I was in bed, and never slept that much in my life. But honestly, I think I’ve been sicker with the flu.”

She said she relied on over the counter drugs; Tylenol and the usual remedies.

What was weird, Anderson said, was the symptoms would go away, then come back out of nowhere.

The Mohave County Department of Public Health contacted Anderson a week after she tested positive. They went over her close contacts, but she had already taken care of that by herself.

“But the shutdown served its purpose,” she said, even though a lot of her colleagues were furloughed and forced to use vacation time. “It definitely flattened the curve.”

(Editor’s note: This is part one of a three-part series.)