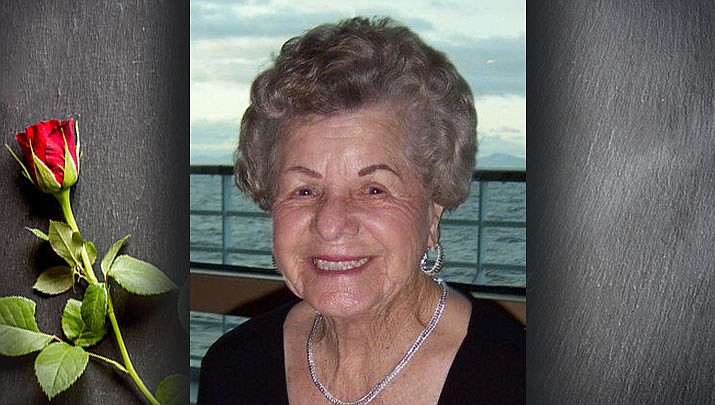 Ann Pat Krueger, age 98, went to her Heavenly Home Aug. 11, 2020. She lived a long, wonderful life. Her family and friends were so blessed to have her in their lives and will treasure wonderful memories.

She was born to Alex and Anna Homotoff on March 15, 1922. She grew up in Bell, California,

graduating from Bell High School. In 1942, she married Paul Cottner and they had a daughter, Pam and son Allen. In 1948, she married Leonard Krueger and they had a son, Leonard. Their Air Force family travelled to Okinawa, Japan; Cheyanne, Wyoming; Grand Forks, North Dakota; Albany, Georgia and settled after retirement in Moreno Valley, California in their dream home.

Ann and Len were active in the Shepherd of the Valley Lutheran Church for over 50 years. They enjoyed many years of RV travel. After Len’s passing in 1987, Ann embraced a new chapter of her life filled with outings with friends, golfing, bowling, church volunteerism and cooking (family favorites-peanut brittle and banana bread). Her great joy was to host large gatherings. Family and friends fondly recall her gracious spirit and seemingly effortless ability to bring people together to laugh, celebrate, share old stories and make new memories.

In her later years, Ann moved to Kingman, Arizona to be with her daughter, Pam and her husband Jerry Fink. The good times continued with travel, golfing and fellowship at St. John’s United Methodist Church.

Ann will later be laid to rest with her husband at the Riverside National Cemetery in California.

Ann died of COVID-19. She passed at Kingman Christian Assisted Care in Kingman, Arizona. She will be missed. Please care for others by wearing a mask and social distance until this pandemic is over. We miss you.