Column | Mohave County geology: Why the mountain looks that way? 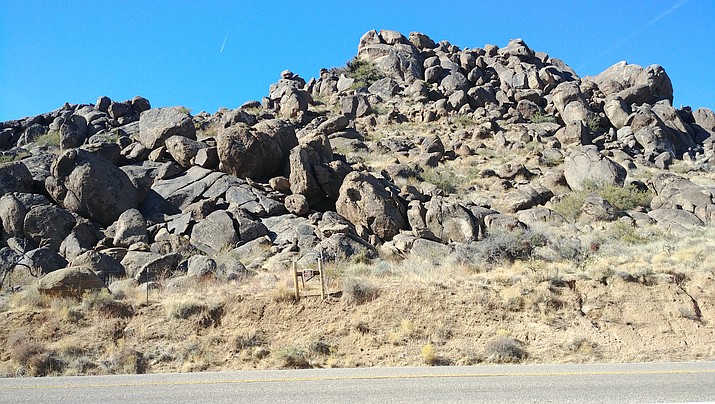 This outcrop showing spheroidal weathering of granite is indicative of what Luis Vega calls “John Wayne country.” (Photo by Luis Vega/For the Miner)

Look at the mountains. You’ll see a variety of shapes, textures and colors. Do these differences tell us anything about the geology of the area? You bet! They’re telling us what the mountains are made of and how they stand up to the relentless forces of erosion. They can even tell us if it’s a good place to look for mineral deposits.

Driving north on Stockton Hill Road on the west side between mile markers 10 and 11, you’ll see one of my favorite rock types and weathering patterns - spheroidal granite weathering. I call this John Wayne country. The rounded, tan-colored boulders tell us that the rock is a granite, and that it’s very resistant to erosion. Drilling a well in this rock will provide only small amounts of water and it doesn’t hold much promise of a large mineral deposit. That’s a lot of information just by looking at a mountain with bolder boulders!

As a cub geologist, I’d walk every contact between rock types until my mentor pointed out the different weathering patterns and how I could speed up my mapping by using the “patterns” to map contacts without having to walk the whole thing out, spot-checking to be sure I was correct. This saved me from wearing out many boots.

The rounded peaks of the Hualapais and Cerbats are granite but the mesas and jagged spires of the Black Mountains tell us something entirely different. The flat top of the southern Blacks indicates a resistant volcanic flow that doesn’t want to be eroded. It protects a softer formation that forms slopes when the protecting rock is removed. Where the capping rock has been eroded through, there are deeply incised canyons. The middle Blacks are dramatic with jagged spires and steep canyons. If you’ve ever four-wheeled over Secret Pass or taken the Sleeping Princes trail you know full well how steep the country is. The spires indicate a very resistant rock, usually a stock or plug of volcanic rock that was intruded into the softer tuffs. As the tuffs weathered, the spires were left pointing skyward giving us Thumb Butte, Boundary Cone and Elephant’s Tooth.

It’s easy to imagine why the pioneers named the prominent mountain to the northwest of Kingman “Bull Mountain.” The reason why it’s so prominent is the fact that it’s capped by a very resistant rock called rhyolite that protects the underlying softer rocks. The large mine workings on the slopes of Bull Mountain produced feldspar. This mine closed in the 1970s. During its operation, trucks stockpiled feldspar ore at the plant located at the intersection of Louise Avenue and the railroad tracks. They would wait until dark to do the crushing so the dust it raised wasn’t as visible to Kingman residents.

To the east of Kingman are the Music Mountains. For a long time I wondered why the pioneers called them the Musics. Was it because the wind blew and made a melodious sound as it rushed through the trees, or was it that the sight of them made them happy and they started to sing? It wasn’t until I talked to an old-timer that I found out that the horizontal lines visible on the upper parts on the mountains reminded them of lines on a sheet of music. The horizontal lines are bedding in white-colored sedimentary rocks capping dark colored metamorphic rocks.

The colors of most of the mountains around Kingman are a somber gray, light tan and dull green. These don’t indicate the possibility of mineral wealth. Drive north on Highway 93 toward Las Vegas and at the turn off to Mineral Park, look east to the Cerbat Mountains. There is a color anomaly around the mine area. The mountains are a blond to reddish-tan color. To the north and south of the blond color, the mountains are a dull green-gray. Prospectors look for this type of color anomaly because it indicates the presence of oxidized iron – rust. Most metals don’t occur in nature in their elemental form (gold does), but associated with iron. When metal-bearing minerals weather, they release iron and the iron colors the rocks and soil the distinctive reddish color. When I’d take my daughter with me to work in the mountains, I trained her to be on the lookout for color anomalies and to this day, whenever she spots one while traveling by air or by car, she’ll call me and want me to investigate the possibility of a mineral deposit. I trained her well.

Driving down the slope on Hualapai Mountain Road, the distinctive color and texture of the Peach Springs Tuff is visible, making up the mesas and buttes around Coyote Pass. The tuff has a tan to light-brown rough and weathered look that is pockmarked with numerous cavities. Because the tuff has all the holes and is very porous, sponge-like, it’s a good source of water. Beale Springs, the only surface water available to the early settlers, is formed by water in a valley where the stored water from the “sponge” seeps out on the surface.

The easily eroded rocks are harder to recognize. They hide under soil and rubble but by looking for outcrop in washes and on ridge tops, you can figure out which rocks are there. In the Hualapais and Cerbats, the low areas are mostly made up of a metamorphic rock called schist. Schist has a platy look and is easily eroded, usually covered by thick stands of manzanita, turbinella oak and mountain mahogany.