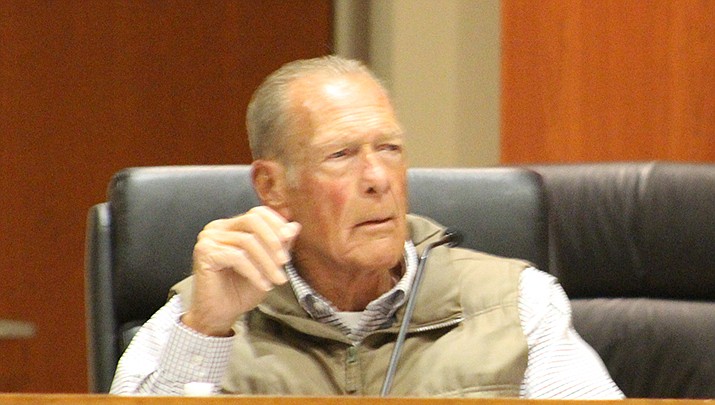 Mohave County Supervisor Gary Watson participates in a discussion at a recent meeting of the board of supervisors. (Miner file photo)

KINGMAN – Mohave County Supervisor Gary Watson of District 1 joined supervisors Hildy Angius of District 2 and Ron Gould of District 5 in refusing to accept an additional $25,000 from the Arizona Department of Health Services for the Mohave County Department of Public Health to “address complaints of businesses noted in [Arizona Gov. Doug Ducey’s] executive orders that are failing to adopt, adhere to and comply with measures to help mitigate the spread of COVID-19.”

The decision was made on Monday, Dec. 7. The current procedures will stay in place, and if the county health department runs out of money, it will be paid for from the county’s general fund, said Chairwoman Jean Bishop, who – along Supervisor Buster Johnson of District 3 – voted to accept the money.

Angius asked county Health Director Denise Burley if the governor’s new executive order that instructs local health departments to close business in violation in a two-strike system will be implemented in the county.

Burley said her department will stay with the current procedures, which is “four strikes,” she said, referring to the number of steps and chances given before any fines apply. She said she doesn’t believe accepting additional money will change that. There are 32 investigators working with such complaints on the state level, she added, but wasn’t sure where and how they operate.

“We don’t have to accept this authority,” said Gould, who once again consulted Deputy County Attorney Ryan Esplin on the language of the executive order. “Let the state inspectors come ... . We don’t have to do it ourselves.”

He learned from Esplin that approximately half of Arizona counties have declined similar funds. One of them, Yavapai County, simply said they don’t want the money. Gould found this information interesting, since Yavapai County is often compared to Mohave County in terms of size and revenue, Gould said.

“This is a problem with executive orders,” Gould said, calling for a normal legislative process, and not “a rule of one” by the governor.

“I don’t want a King of Arizona or the King of the United States,” Gould said. He added that if the governor wants to enforce his orders, he has to send his own people.

Angius said this refusal is a good opportunity to send a signal to the state and say: “Thanks, but no thanks.”

“Let me remind you about $65 million in potential liabilities that can be due at any time,” Bishop said.

“Let me remind you this money [$9.1 million from the CARES Act] was given to us for COVID, not for unfunded liabilities,” Angius responded.

Watson was convinced by that logic and joined the effort “to not receive the dollars.”

The vote to decline the money was 3-1 and was met with applause from the audience.