Peeples Valley cowboy reflects on 6 decades in the saddle 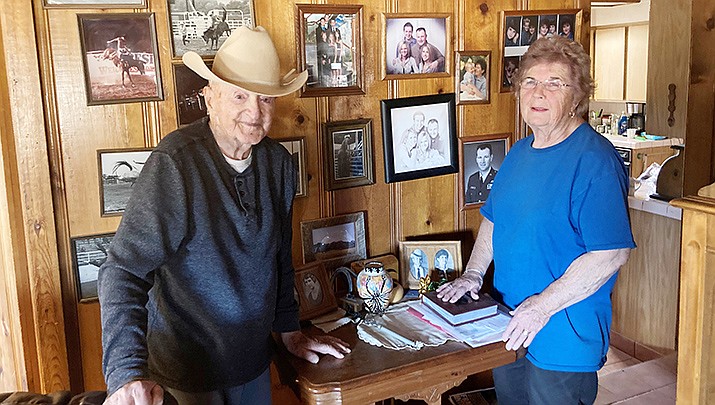 Wayne and Susie Welsh pose for a photo in their home of 60 years in Peeples Valley. (Photo by Nanci Hutson/For the Miner) 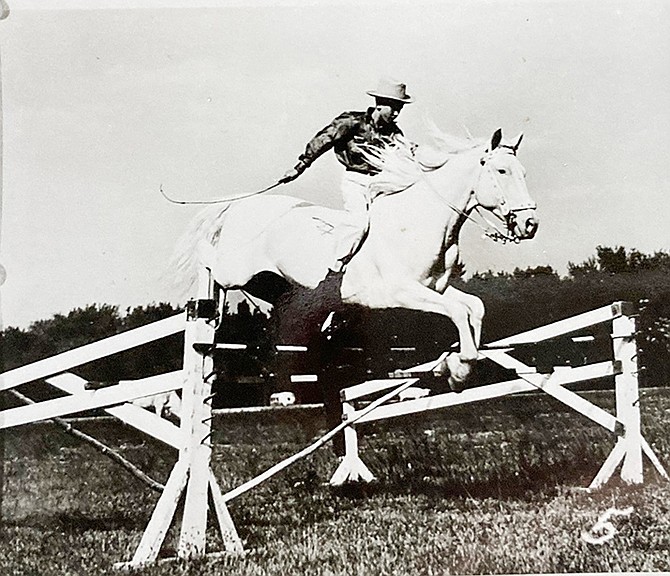 Wayne Welsh performs for the White Horse Ranch rodeo in Nebraska. This photo was featured in “Life” magazine more than 50 years ago. (Wayne Welsh courtesy photo)

PEEPLES VALLEY – Down a dirt lane just past the center of Peeples Valley is a house with a stone fireplace, a front porch bird feeder shaped like a cowboy boot and an indoor wreath that welcomes guests: “HOWDY.”

The owners of the 10-acre ranch cradled by mountains and long stretches of grassland suitable for horses, cattle and other wild critters are a humble, happy couple who rejoice in gratitude for a life most known only from legend – think cowboy movie stars Will Rogers, John Wayne or Clint Eastwood.

“We do appreciate our life right out here,” declared Susie Welsh who pulls up a chair next to her real-life cowboy and rodeo performer husband, Wayne, 97, whose face breaks into a broad smile.

Sitting in the cozy hub of their six-decade home where they raised three children – two sons, Waco and John, and a daughter, Mona, who have since enriched their lives with eight grandchildren and 16 great-grandchildren, one born just this past month – this still-in-love couple almost giggle as they travel memory lane together.

All around their rambling home are framed photographs – some aged black-and-whites of Wayne standing on the back of a large white horse he jumped in a trio at a rodeo show with his handy lasso flying above his head – that speak to a rare, adventurous life.

Wayne and Susie’s story inspired a family friend and novice poet/songwriter in Ohio, Ned Webb, to write a series of ballads turned into a Nashville-produced CD highlighting their escapades. One includes the day when Wayne lassoed a bobcat.

“The story of how Wayne Welsh became a cowboy is a fascinating, near unbelievable one of a man who had enough faith in himself and enough independence of spirit to leave home … to pursue his dream of being a cowboy,” Webb said of the man he met about two years ago through Webb’s eldest son.

With just “spunk and a frayed piece of rope” Wayne ended up working on the largest ranch in Texas and landing a photo in “Life” magazine of him performing with his lasso and riding for the White Horse Troupe in Sand Hills, Nebraska, a “remarkable feat,” Webb declared.

Wayne and Susie are not the limelight type. Susie seems embarrassed by Webb’s effusive praise.

Yet Susie is more than happy to boast about her husband’s feats.

“It’s just wonderful what he’s done his whole life,” Susie said of the man who beyond ranching and rodeo learned to braid and knot leather he crafted into jewelry he gave to her as gifts.

A friendly, humble man, Wayne smiles at is wife’s adulation.

Then he shares his secret: “I’ve had a good life with a good woman. That’s the answer.”

Wayne’s first memory of chasing his rodeo dream was rejection — he couldn’t land a job. With only a small suitcase and a few dollars to his name, Wayne ended up accepting work at an East Coast riding academy. From there, Wayne volunteered to transport some horses to Jacksonville, Florida, where he ended up teaching horseback riding lessons at a private girl’s school.

He lasted a winter.

A friend rescued him. The two road tripped to Tucson before he returned to the family farm.

His cowboy/rodeo wanderlust not yet abated, Wayne’s father loaned him the family car so he and a friend could drive to Wyoming for more ranch work.

From there, Wayne ended up at the White Horse Ranch in Nebraska where he learned how to become a trick rider and tame a bucking horse. It was there he earned his rodeo stripes.

“It really was very simple,” said the man who ended up also performing at a California circus where he counts himself “fortunate” to endure a harrowing fall with no serious injury.

To this very day, Wayne said he is grateful he was able to fulfill his childhood ambition – and do it for an audience. “It was fun,” he said.

Between rodeos, Wayne worked on ranches across the western United States, including California, New Mexico and Arizona. He makes it clear the “camp job” he had chasing after 1,000 herd of cattle for one of the largest ranches in Texas was far from glamorous.

Much of it “was boring,” he admits.

The flame of Susie and Wayne’s six-decade love affair was sparked at a Saturday night square dance in Wickenburg.

In his mid-30s at the time, Wayne was bringing a batch of horses to a dude ranch in Wickenburg where Susie was working as a waitress.

“A woman who will tell her age will tell anything,” she said.

What Susie happily recalls of their first date is how “he could dance like a dream.”

“I liked him. We made a pretty good connection,” she said.

“I was a man of few words,” said Wayne, who followed her back to Colorado where they married six weeks later.

“He’s such a gentleman and a great dancer,” Susie said. “He’s just a wonderful guy.”

Wayne landed a 25-year job as a state brand inspector – he retired at the age 70 – and Susie retired as an assistant branch manager after 21 years with Valley National Bank in Yarnell.

Susie briefly mentions her connection to a notorious crime. She and her daughter were at the bank in 1977 for an attempted armed bank robbery. The boyfriend/girlfriend pair died of self-inflicted gunshot wounds. She then quickly changes the topic. Too painful.

“I was worried,” her husband whispers.

“They’re just nice people. Good to everybody,” said 50-year friend Nancy Logan. “Wayne did a lot of things in his life. And he’s such a great person. And so is Susie.