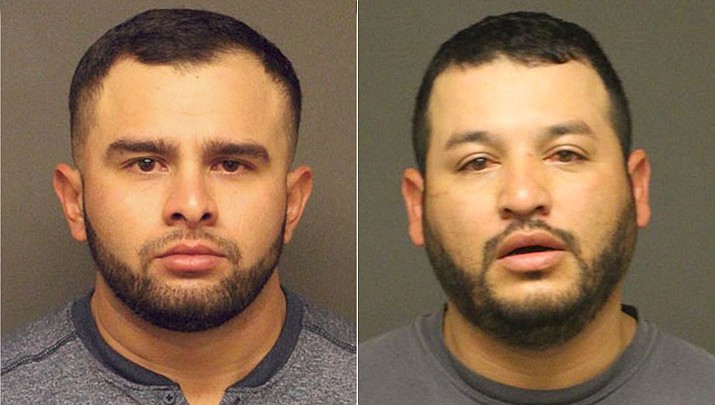 KINGMAN – Two Kingman men were arrested by the Mohave County Sheriff’s Office after one allegedly pointed a gun at another motorist and demanded his ID while at a stop sign.

At approximately 1 a.m., deputies were dispatched to a business in the 2800 block of Northern Avenue in reference to a weapons offense.

Deputies arrived on scene and met with the victim who advised he had been driving his car in the area of Melody Street and Butler Avenue when a metallic-colored sedan pulled up next to him at a stop sign.

The victim alleged that the passenger of the vehicle, a Hispanic male wearing a black shirt and black hat, demanded his ID and pointed a gun at him. The victim then placed the car in reverse and was able to drive away.

The sedan began following the victim’s vehicle, and reportedly placed a white strobe light in the windshield, attempting to appear as an officer conducting a traffic stop. The victim continued on without stopping, eventually getting to the business to call law enforcement and the pursuing vehicle fled the scene.

While on scene conducting their investigation, deputies observed a vehicle that matched the description of the suspect’s vehicle drive by the scene. Deputies began following the vehicle and attempted to conduct a traffic stop, when the vehicle reportedly took off at a high rate of speed. The vehicle eventually came to a stop in the 2700 block of Leroy Avenue.

Deputies made contact with the driver, identified as 27-year-old Oscar Valdimir Quijano-Monge of Kingman, and the passenger, identified as 30-year-old Carlos Rutilio Ochoa Quinones of Kingman. Deputies report observing an open beer bottle in the vehicle and detecting the odor of alcohol coming from inside. Deputies removed the driver from the vehicle and observed a folded dollar bill with a crystalline substance left behind on the driver’s seat.

Quijano-Monge was patted down and deputies say they located a machete-type knife in his right pant leg.

Deputies then made contact with the passenger, Quinones, who matched the physical description given by the victim. Quinones was removed from the vehicle and deputies reportedly located a black handgun tucked between the passenger seat and center console.

Also located were a flashlight in the vehicle that had a white strobe setting and two more folded dollar bills with more crystalline substance on the passenger seat and in the passenger side door panel, according to law enforcement. Both subjects denied any involvement in the incident. All crystalline substances reportedly tested presumptive positive for methamphetamine.