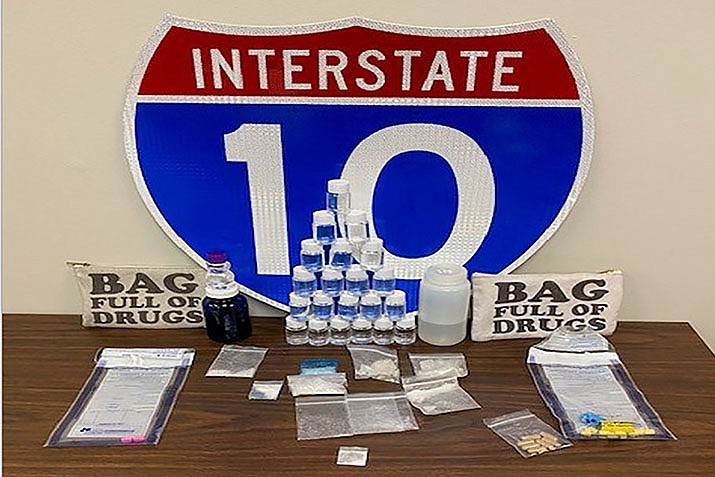 Ian Simmons and Joshua Reinhardt, both 34, were pulled over in Santa Rosa County on Saturday after a trooper clocked them going 95 mph on Interstate 10 on the state’s Panhandle, according to a Florida Highway Patrol arrest report.

The trooper determined that Reinhardt was the subject of an active felony warrant for violation of probation in Orange County. He requested backup.

A Santa Rosa County Sheriff’s deputy arrived to assist, and a K-9 alerted to the presence of contraband in the vehicle, the arrest report said. Authorities found approximately 75 grams of methamphetamine, 1.36 kilograms of the date-rape drug GHB, 1 gram of cocaine, 3.6 grams of fentanyl, 15 MDMA tablets and drug paraphernalia.

CAMDEN, N.C. — It was a bear-y baffling discovery in front of a North Carolina home.

Cornelius Williams returned home from the grocery store Tuesday night and heard a squeaky noise coming from a cardboard box left in his walkway, WTKR-TV reported.

It was dark outside, so Williams called authorities for help.

A deputy approached the box, peered inside and to his surprise — he found two newborn bear cubs.

While black bears are no stranger to Camden County, Sheriff Kevin Jones said finding cubs in a box was “a little strange.”

Williams wasn’t sure why he was left to bear with the box of blanket-wrapped cubs, but they are out of his paws now.

The bears were taken to the North Carolina Zoo in Asheboro to be examined and cared for, various news outlets reported.