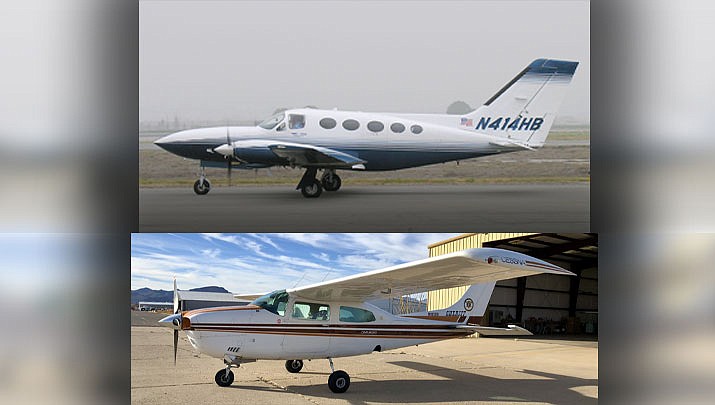 To fly, or not to fly? That was the question at last week’s Mohave County Supervisors meeting, and Sheriff Doug Schuster clearly made his case for the office having an air arm.

At issue was the purchase of a 1982 Cessna 8-passenger prop-driven airplane for about $300,000. It can fly 270 mph, and would replace an older, smaller, slower model that is grounded and in need of repairs.

The new plane can carry an entire SWAT team and its equipment, and the older plane will be sold, partially offsetting the cost of its replacement.

And a nice footnote is the new plane won’t cost taxpayers a dime. It will be purchased with money seized from drug traffickers through the federal Racketeer-Influenced and Corrupt Organizations Act.

But Supervisor Ron Gould of District 5 raised questions regarding the cost of operating the plane, which he said could approach $300,000 per year.

Schuster and his pilot disputed the cost, saying the plane would only fly about 100 hours per year, causing Gould to question if the county needed airplanes at all. (In addition to the new Cessna, the sheriff’s office has a smaller 1978 Cessna T210M.)

What Gould may have failed to consider is that Mohave County covers a lot of territory – 13,461 square miles to be exact. It’s the fifth-biggest county in the United States; bigger than the states of New Jersey, Delaware and Rhode Island combined.

To get from bottom to top takes hours of driving and a lengthy detour through Nevada, unless you can leap the Grand Canyon. This poses a navigational problem for the sheriff’s office, the law enforcement agency charged with policing it all.

While there are deputies stationed across the canyon in the Arizona Strip, there aren’t enough to handle major incidents, or to field a SWAT team.

That’s where the airplane comes in to play. If there’s big trouble in the Strip, the airplane can be there in minutes, not hours, carrying eight deputies and their equipment. Ditto for other distant county destinations.

And that’s just one of the reasons it’s in the public’s best interest for the sheriff’s office to have an airplane.

The planes give the sheriff’s office the ability to conduct aerial surveillance, an important tool in a county of more than 200,000 on primary drug smuggling routes.

And they are also ideal for transporting potentially dangerous prisoners.

When a crime is committed in Mohave County and the perpetrator is captured in some distant city, it’s the county’s responsibility to safely bring the suspect back to face justice.

That can mean buying tickets for commercial flights on the fly, along with rental cars, hotel rooms, per diems. The cost for a single extradition runs into the thousands of dollars.

Putting prisoners and their guards on commercial flights can unnecessarily expose the general public to some unsavory characters.

Fortunately, Gould acquiesced, and the board of supervisors voted to purchase the plane.

It’s not easy riding herd over a county the size of Mohave. It’s nice to see the supervisors give the sheriff the tools that he needs.